Qawra/Dwejra is part of the Tentative list of Malta in order to qualify for inclusion in the World Heritage List.

Qawra/Dwejra it is a coastal area in the west of the island of Gozo. The area features interesting geological formations, including Fungus Rock, Blue Hole and the inland sea Il-Qawra. It was also the site of the Azure Window natural arch, which collapsed in 2017. The area is home to several endemic plant and animal species. 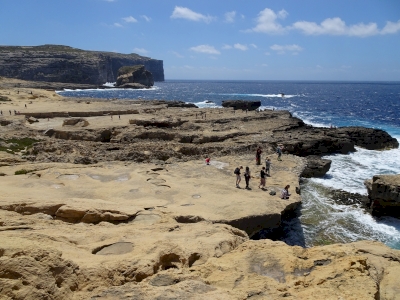 Dwejra lies on the western coast of Malta's sister island Gozo. The rock cliffs are especially rugged and picturesque here, with various spectacular natural attractions, like the "Inland-sea" lagoon, the blue hole diving spot and the "fungus rock" island. The best known attraction however, the "azure window" rock arch, has collapsed and vanished without much trace. The area is still a major tourist stop, with lots of people wandering around the rocks making selfies, so don't expect some kind of wilderness experience. Especially the inland sea lagoon is totally surrounded by quays and tourist bars, and is not really beautiful to look at. As often, you can escape the tourist hordes by venturing further outside. Wandering along the cliffs can be quite rewarding, and there is still much beauty to be found.

As a WHS nomination, the site has some problems. The loss of the azure window makes the site less iconic. More importantly, the general uniqueness is questionable. There are a lot of rock cliffs around the world, and many are beautiful and full of rare plants. The nomination text emphasizes the rareness of the vegetation, but I am not convinced. It doesn't help that the most prominent plant, the Malta Fungus, turned out to not be as endemic as thought. One more problem of the nomination is the quite similar tentative entry of Malta named "Coastal Cliffs".

All in all, I would rate the site in the category: Very nice, but not special enough for a WHS site. But I have generally a problem to judge natural sites.
Visited in April 2019.
Importance 3/5 Beauty 4/5 Uniqueness 2/5 Environment 4/5 Experience 4/5

yes I have been more than once. A lot of my friends from Italy, Spain. Uk and USA ask me to take them to this rock whenever they visit Malta. They marvel at it as I have always done especially with iots history, mythaand legends surrounding it. To give it more colour it has been the background for many films which magke it an outstanding landmark and a must see site.