Sarajevo is a multicultural city often described as a crossroads between East and West. Founded by the Turks in the 15th century on a site inhabited since ancient times, it has traces of the Neolithic Butmir culture, Illyrians, Romans, Slavs… For centuries, Bosniaks, Catholics, Orthodox, Jews, Turks and Greeks all lived around its famous Baščaršija. The annexation of Bosnia and Herzegovina by the Austro-Hungarian at the turn of the 20th century, though brief, also left a lasting legacy. 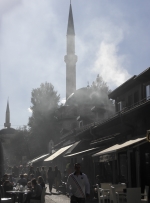