California Current Conservation Complex is part of the Tentative list of United States of America in order to qualify for inclusion in the World Heritage List.

The California Current Conservation Complex includes a contiguous group of nationally-protected seashores, marine sanctuaries, and wildlife reserves along the central California coast. The Pacific shoreline of the complex is an area of exceptional natural beauty, while the offshore Monterey Canyon, Davidson Seamount, and Cordell Bank exhibit dynamic geological processes still being studied by scientists. The rich marine habitat found within the California Current ecosystem is fueled by coastal upwelling, and supports migratory populations of sea turtles, fish, sea birds, and marine mammals, including the endangered blue whale. 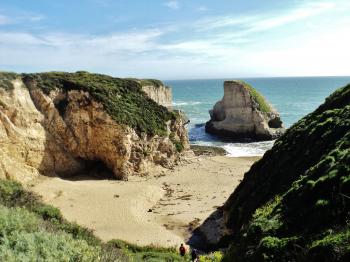 The California Current Conservation Complex is an incredible, dramatic and ecologically important coastline and marine area stretching from Point Piedras Blancas in the South and Point Arena in the North. As the crow flies, 425 km separate these two points. In between, is a diverse mishmash of state parks, marine reserves, conservation areas, national seashores, national recreation areas, and a national monument that spans the whole California coast. The Bureau of Land Management, National Park Service, and California State Parks manage most of these special lands and seawaters.

The predecessor to this whole scheme called California Current Conservation Complex is the designation of the California Coastal National Monument in 2000, which was recently expanded twice by President Obama in 2014 and 2016. There are several gateway communities to begin exploring this vast coastline: Piedras Blancas - San Simeon, Pigeon Point, and Point Arena. To learn more information about this region, Monterey is the ideal starting point. The Monterey Bay Aquarium is splendid and certainly the best aquarium in California. From Monterey you can head south toward Big Sur or north to further explore Monterey Bay before arriving to Santa Cruz. Despite its more famous southern neighbor the North Coast and Coast Dairies are as dramatic, wild, and beautiful as any portion of the California coast.

Over the last decade, I’ve made dozens of excursions to different areas of this protected region. Each visit is rewarded with new discoveries that have increased my appreciation of “California’s [marine] Serengeti”. Exploring all components of the California Current Conservation Complex has been an ambition of mine (nearly there), but not easily reached since some portions are only accessible to scientists. I’ve viewed one of the keystone species (Sea Otter) on more than one occasion in the Monterey Bay region; it’s fascinating to see this mammal use stones to crack open sea urchins! Several species of whales, seals, dolphins, and sharks are also not uncommon sightings.

This is an ambitious nomination, and it will be difficult to compile such a complex dossier with so many stakeholders. However, I am confident IUCN will have little critique in regards to OUV.