Orvieto is imposingly situated at the summit of a 150m-high tufa cliff, emerging like an island from the surrounding plains. With an urban structure that has remained essentially unchanged since the 13th and 14th centuries, it is dominated by its cathedral, built during the same period. The cathedral's facade, a great triptych built by Lorenzo Maitani with superb mosaics on gilt backgrounds, is the prime masterpiece of Italian decorative Gothic. 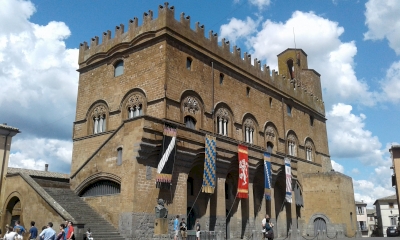