The Temple Zone of Sambor Prei Kuk is an archaeological site of the Pre-Angkorean period.

The site correspondents with Ishanapura, the capital city of the Chenla Empire that flourished in the late 6th and early 7th centuries CE.

Located on the Eastern bank of the Tonle Sap lake, the central part of Sambor Prei Kuk is divided into three main groups. Each group has a square layout surrounded by a brick wall. The structures of the overall archaeological area were constructed at variable times. A particular feature is its octagonal-shaped temples, the oldest of their kind in South-East Asia. 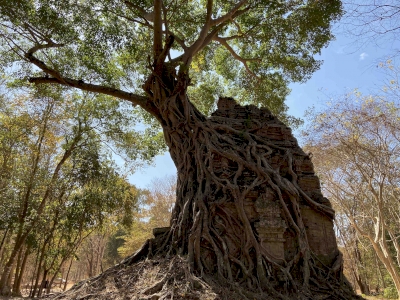 Prasat Sambor Prei Kuk is a complex of temples and cluster of temples from pre-Angkorian Chenia kingdom. Our driver led us to the smaller temples first and then to the main temple ensemble. It was very pictureque and interesting, we walked along the single temple structures with couple of local tourists along. It was a pleasant visit and I enjoyed myself. There were some interesting carvings as well, one of the temples was under a scaffolding due to its structural integrity being compromised.

It was a good visit overall and though we've already seen some more substantial sites the day before, I appreaciated the site for its history but also as a secluded and quiet spot, away from the main hubub. After our visit we stopped for a lunch and went on to see the mighty Angkor Wat itself.

This is the newest whs in Cambodia, but the oldest site (of the three). We rented a car and a driver to get there on a day trip from Siem Reap. It’s about a 3 hours drive.

The site was founded by the Chenla empire In the 7th century which makes it 3-400 years older than the Angkor empire.
The site is much more ruined than Angkor due to nature, but also to American bombs in the early sixties and to the vandalism of the Khmer Rouge in the seventies.

The whs cover three temple complexes, but there are some small temples scattered around. The first temple complex is close to the parking lot and easy to find. The others slightly more hidden.

Prasat Sambor
The most precious to see is the stone carvings. Most of them are gone, but some are visible. One carving covers typically one side of the octagonal temple.

Prasat Yeay Poen
There’s a bit more to see here and there are present restoration going on. Here you can also enjoy the carvings, but the most enjoyable is parts of the surrounding walls that are recovered and at some places you can see some of the 160 huge “medallions” which covers the wall on the inside. Very nice!

Prasat Tao
There is only one temple left, the main temple. The rest is just stone piles. The greatest objects are the two lions in front of the temple, They were both broken down by the Khmer Rouge so they are thorrowly are restored. 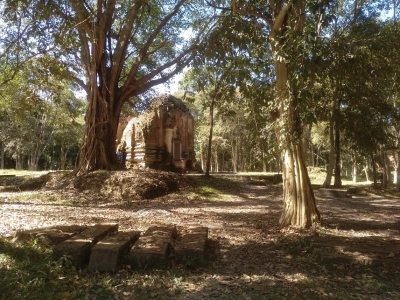 Ignoring Els’ rule to "always do Angkor last on any trip involving Angkor" I opted for one last WHS visit on my way to the airport in Phnom Penh: Sambor Prei Kuk. The site is conveniently located close to the main road between Siem Reap and Phnom Penh. So this was simple stop over, splitting a long bus ride into two more manageable legs.

Sambor Prei Kuk was the first capital of the Khmer Empire and predates Angkor by 300 years. Initially I was worried to get a worse version of Angkor. But the age difference clearly shows in artistry and architecture and sets the site apart. It does have the same jungle setting with trees growing in and on top of buildings. But due to the way smaller crowds (if any) Sambor Prei Kuk is a more intimate experience.

So in summary, the site felt like a nice last visit complementing my Angkor experience. So I would argue that Els original rule needs a revision.

The next big town is Kampong Thom. Most buses running between Siem Reap and Phnom Penh will stop here. You can buy tickets at your local hotel or a travel agency.

Via minibus it took 2.5h including pickup at my hotel to get from Siem Reap to Kampong Thom. Travelling on via normal bus to Phnom Phen the journey took 4.5h, 30min spent on a break and at least 1h spent in the terrible traffic of Phnom Penh. I would opt for a minibus if you have the choice.

From Kampong Thom you can take a car (20 USD) or a Tuk Tuk (15 USD) to the site. I opted for the Tuk Tuk and we drove for an hour to get there. The ride was organized by my hotel, but there are plenty of Tuk Tuk drivers roaming the main street in Kampong Thom. Alternatively, you can contact the local tourism board. Finally, Thomas stated that there was also a public bus available, but Tuk Tuk will always be my preferred option if available.

You can do Sambor Prei Kuk easily as a day trip from Siem Reap using public transport. Doing the same from Phnom Penh is probably harder due to traffic.

Kampong Thom itself is uneventful. It boasts some rather simple hotels and restaurants.

Main nearby attraction would be Tonle Sap Lake, the largest fresh water lake of South Eastern Asia. The lake is unique as the flow to the Mekong reverses during high tides. It is already a Unesco Biosphere Reserve, but maybe it also has potential for a world heritage site. 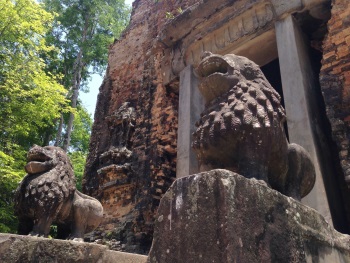 From Phnom Penh, it is possible to do a day trip to Sambor Prei Kuk, a beautiful pre-Angkorian temple complex in the middle of the forest. The Kampong Thom local tourism office actively encourages tourists to arrange visits with local communities - from tuk-tuk rides, tour guide service and site interpretation.

According to my guide, Sambor (many) Prei (forest) Kuk (temples), means, many temples inside the forest. Indeed, SPK is situated in a distinct landscape, different from the vast plain of Angkor Wat in Siem Reap, or the sacred cliff of Prasat Preah Vihear. The forest appears to be an integral element of the temple complex, no wonder the site is nominated as a cultural landscape 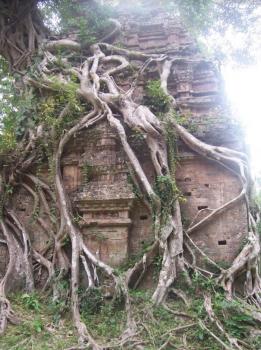 This is the best preserved pre-Angkorian archaeological site in Cambodia and if all goes to plan then this should be Cambodia's next World Heritage Site.

The ruins here comprise three different temple complexes all within easy walking distance of each other. They are set among a nice sandy forest that gives the site a cool and relaxing atmosphere. The ruins are different enough from those at Angkor to warrant a visit and also provide a good look at pre-Angkorian styles or art and architecture. The temples are mostly brick built and look more like hollow pyramids, the distinctive poses of the statues of this period are shown in reproductions as the originals are now in museums. There is also a fair bit of bomb damage to some of the temples, from the US bombing raids and also from the civil war. There are also several temples that have been completely taken over by trees, the gatehouse at the final complex is now more tree than brick.

The site is located to the north of Kompong Thom. I managed to visit in a short day trip from Siem Reap. It was very easy to get a moto from the junction just before Kompong Thom out to the site and to bring me back. The route out there was very enjoyable, going through some nice villages and between some lovely paddy fields.

The temples here were sufficiently different from those at Angkor to warrant a visit. There is a nice ambiance to the site and it is a good way of seeing something more of Cambodia's earlier heritage.

Damaged in War since WWII: After the Lon Nol's coup d'état to Prince Norodom Sihanouk in 1970, US President Richard Nixon ordered a secret bombing of Cambodia to fight the Khmer Rouge guerrillas and any influence of North Vietnam in the country. The US aircraft bombed positions inside the archaeological site, causing craters near the temples, while the guerrillas left several mines on the land that were cleared only in 2008. (wiki)

Built in the 6th century: the capital city of the first empire and first Khmer State in the late 6th and early 7th centuries CE (AB ev)