The Archeological complex of Banteay Chhmar

The Archeological complex of Banteay Chhmar is part of the Tentative list of Cambodia in order to qualify for inclusion in the World Heritage List.

Banteay Chhmar is a massive temple complex from the Angkorian civilization. It is located in a remote location in what was a provincial city. The complex had sacred monuments and a man-made water control system.

Map of The Archeological complex of Banteay Chhmar 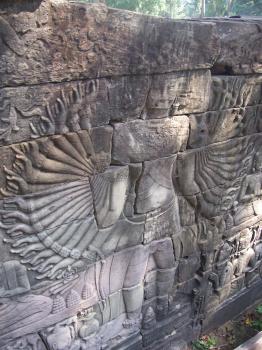 This is a little way off the beaten track, but well worth a visit if you are in North-Western Cambodia. The ruins are some of the most extensive from the Angkorian period and contain some particularly fine carvings, ranking along with the finest at Angkor Wat.

The remains are pretty extensive and are very much still ruins, you will have to clamber over toppled rocks for pretty much the whole time you are in the central complex so take a sturdy pair of shoes and a decent dose of common sense as some of the structures are very precarious. The most impressive single element was the carving of the multi armed goddess'. There are only two of these remaining after several other were brutally hacked of a sent out of the country in one of the most astounding pieces of cultural barbarism I have encountered. However it is not all bad news, I had a tour of the site with Mr Sy from the local Community Based Tourism project. This group along with the Global Heritage Fund have been putting in a lot of effort to promote the sites. The GHF have also been doing some extensive restoration and mapping of the area, both to help preserve it and to help with its nomination to the World Heritage list, an overview of the work can be found here. This would make a great WHS and would be suitable reward for the local and international efforts that have been put into protecting a very vulnerable site. Keep up the good work and best of luck.

I visited this site from my friend's house in the NGO rich town of Sisophon, however it could conceivably be done as a long day trip from Siem Reap. I would thoroughly recommend staying the night at Bantay Chemar and the CBT group offer a good selection of home-stays and local food which would be a nice way to get a feel for Cambodian life.

Half the fun of this visit for me was the trip there. Firstly I was in a share taxi, in Cambodia there seems to be no limit on the number of people that can get on a single mode of transport. My standard sized car contained 7 people and the majority of a market stall, when I told my friends about this they said I had been lucky, they had travelled with 9 in a car before! There had been heavy rains a week or so before and these had an effect on the road conditions. On the way up parts of the road had been washed away and enterprising locals had put planks across to make a bridge and charged a not insignificant toll. We then had to wait for about 45 minutes whilst dumper trucks and a Belorussian tractor filled in a more significant breach in the road, providing me with time to speak a few locals and get a taste of the pace of Cambodian life. On the return leg the mighty Belorussian tractor was doing a sterling effort of rebuilding the road still however the locals who had set up the bridge had decided that 3 o'clock was far too late and dismantled it and taken it home on the back of some carts. This left me with a 3 hour detour on some mightily poor roads, over yet more makeshift toll bridges. It was a great if very bumpy experience.

These were the first Angkorian temples I visited and I was very impressed by them. I hope that they do become a WHS soon as they are certainly worthy and a lot of effort has been put into them by local groups and the Global Heritage Fund.