The Rock Carvings in Dazu are highly authentic, have high aesthetic qualities and show the coming together of Buddhism, Taoism, and Confucianism.

They date from the 9th to 13th centuries, and are considered to be the best representatives of the latest phase of rock art in China. They clearly demonstrate the ingenuity and craftsmanship of their artists with respect to carving techniques and subject matter. In that way, they differ from the other, earlier, Chinese rock art world heritage sites Yungang, Longmen and Mogao.

The designated area consists of five separate sites of cliffside carvings: Beishan, Baodingshan, Nanshan, Shizhuanshan and Shimenshan. Baodingshan is the most prominent site of these. 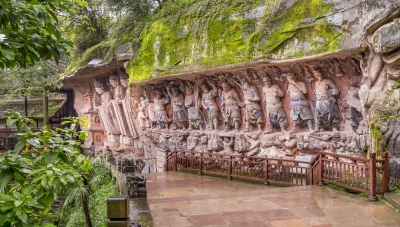 I was amazed by the beautiful colors especially at Baodingshan and the fine carvings at Beishan. I think they are much nicer as those at Yungang and Longmen. I visited 4 out of 5 locations as I left Chongqing to late in the morning. I didn't see Shizhuanshan which I regret a bit as that's the one where really each 3 religions are present. Baodingshan and Beishan are full of tourists but at Nanshan and Shimenshan I was alone.

Dazu isn't included on many standard China itineraries but if you have the option do go. These carvings, thousands, are a true wonder. I would even compare them with the Terra Cotty army. Which is also amazing.

One of the true mysteries of the East. Leaves one comparing what was happening in the West at the time.

My visit was facilitated by my Chinese friend Ping ping. I will forever be in her debt for opening my eyes and providing the living proof of depth and sophistication of Chinese cultural and heritage. This is a crucial place and of course i was stunned.

The quality os the statues is sublime of course and so beautifully preserved, Michelangelo just does not rate against this effort. And the colour was surprising and stunning especially as other places have mostly lost their colour.

In the summer of 1987 my husband two teenage sons and I were in Chongquing awaiting a late afternoon departure on an overnight Yuanze River cruise to Wuhan. We wanted to see parts of rural China before the the building of the Three Gorges Dam flooded villages and necessitated the relocation of millions of villagers.. Little did I know that there was no hurry as it would take over two more decades to complete the dam.

We were in Chongquing just for the day and we hired private transportation and a guide to take us to the grottoes in Dazu several hours away. The journey through the countryside was amazing. It was as if we'd been transported to a pre-industrial world. At the grottoes I was unprepared for the number of statues. They were not painted as I see pictures of them today. There were few visitors that afternoon and we were the only Westerners. My blonde hair caused quite a stir. If we had not had the benefit of an English speaking guide my brain would have "shut down" as its an overwhelming site.Having said that if I can remember one afternoon 27 years ago it must have been an impressive experience.

The caves are in good condition. Arrive early to avoid the crowd. In winter, since it is down season, I had to pay only 80RMB for both Beishan and Baodingshan. Really a good deal!

There are regular buses from Chongqing to Dazu; but buses going out from Dazu are limited. I intended to go to Emei/Leshan from here; but I had to go to Zigong (Sichuan) first and take it from there.

Just returned from a trip to the Dazu carvings. We were at the Beishan carvings on July 30, 2008 and then at the Baodingshan carvings the following day. We spent the night in Dazu City at the Dazu Hotel. We wanted to enjoy the sights in a leisurely manner.

First, my wife and I are over 60 and my wife is ethnic Chinese so we were given tickets at half price. This is so inconsistent across China that we usually ask for the half price as a general rule. The people at the sites were wonderful. We also showed our Experts Certificate as we teach at Southwest Jiaotong University in Emei City, Sichuan. Clearly a bonus!

These should be on everyone's list of places to visit while in Chongqing. The transportation is a cinch and, with the exception of a taxi driver wanting to take us to Beishan for 30 yuan instead of the normal fare of 5 yuan, the transportation is cheap.

As a magnificent bonus, we were honored as number one guests the night we stayed in Dazu City. We were roaming around the area as our custom to check out what the seniors do in China. Usually this is done at the local park area and that is where we ended up. Seems our luck was great as the city put on a marvelous Chinese show in celebration of something. It was absolutely wonderful and we were made to feel right at home. The most unusual performance was done by a group of students in the traditional dragon dance but this time they threw in a bunch of fish swimming along side the dragon. We were told that these kids had won a prize for their efforts in Beijing the month before.

Overall, this is a great tourist sight for Westerners. It was hot but not crowded and some really good tourist stuff available for those who like to bargain. It was the highlight of our Chongqing trip.

We (a small tour group) visited the Dazu Rock Carvings in late 1984... It was not a spot frequented by tourists, but since the Chinese Communist travel agency had pulled our group out of Beijing a day early, they made up for it by busing us from Chongquing 3 hours by bus to the hamlet of Dazu. It was the highlight of our 3 week trip... when I visited there were no railings to obscure the view, no benches & no other tourists. It's sad to see from these recent photos that the bas-reliefs have been painted recently. What we saw in 1984, were beautiful, detailed Confucian, Taoist & Buddhist carvings, which had traces of paint (very pale colors) that had faded over the centuries. I'm happy that railings will protect the carvings from being touched (they certainly need this in Angkor Wat), but it's sad that someone decided to paint these carvings, especially since no attempt seems to have been made to approximate the original colors.

With the giant earthquake in the Chongquing province, I wonder was has happened to these amazing carvings. If they remain intact & you are planning a visit to Sichuan, I would encourage you to take the time to visit the Dazu carvings.

The carvings are in a chasm, an open grotto. They were designed by a Buddhist monk, so cleverly that the carvings are protected from the rains -- drainage pipes were cleverly included, so that mouths are sometimes the conduits to expel the water. 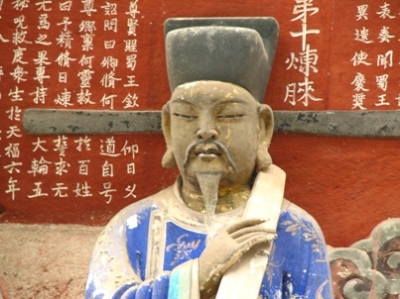 This is one of those sites that fully deserve their World Heritage status. And it all starts out so inconspicuously: the main site (Baoding) is located 12 km outside of Dazu town. A local bus gets you there for 3 Yuan. It really is a trip into the heart of the Chinese countryside: grandparents showing of their grandchildren, people walking by with huge loads of agricultural produce on their backs and a pleasant green hilly landscape.

The abundance of souvenir stalls near the entrance shows that the site itself sees a fair number of visitors in the high season. During my visit on a Thursday in September it was relatively quiet though. The Baoding grotto is made up of 13 groups of stone carving figures, totaling nearly 10,000 cliffside figures. That really is a lot. You don't know where to look first, it felt like one big chocolate cake. Most of the figures are painted brightly. The sculptures are protected from the elements by protruding rock. Fortunately they have made benches in front of the carvings so you can just sit and gaze.

The sculptures did remind me a lot of European medieval paintings or tapestries. It's really a different side of Buddhism than what I've seen before. Many of the carvings depict scenes of daily life and show religious rules for behavior. They feature religious figures but also include monarchs, officials and ordinary people. Hell is represented rather harshly, showing a number of ways of torture in detail.

As a serial traveler of WHS (76) Dazu is one of the smaller sites that a one day visit can do it justice. There are actually two periods represented, the Song Dynasty (c. 1000-1200 AD), in which Buddahism was in decline, therefore the scultures (as shown in the photos by Mr. Tanner) were more pedestrian, educational for the novice, paid by the temple; the Sui-Tang period at a separate site, (c. 500AD to 900AD) in which the religion was in full bloom. The scultures were more spititual, and served as shrines and paid for by the devoted believers.

A trip out to Dazu is a good way of filling a couple of days after you have booked your Yangtse Gorges boat ticket in Chongqing. The smallish town is pleasantly situated among fecund Sichuan countryside and the scenery, with its hardworking peasants cultivating every inch of land, provides a pleasant adjunct to visiting the grottoes themselves. The leisurely rural bus ride out from Chongqing was a nice introduction when we were there in 1994 but, since then, the Chengdu – Chongqing expressway has opened, and I cannot speak for it today (China is a new country every 10 years!).

There are several locations with grottoes but Baoding is recommended as the best and is easily reached by regular bus from Dazu town. The grottoes are set at the bottom of a crescent shaped cliff and are unusual in that they were apparently conceived of as a whole and were completed in the relatively short timescale of 70 years from 1179AD. They are therefore the most “modern” of the 4 WHS Buddhist cave/grottoes – the others at Yungang, Longmen and Mogao all belong to a much earlier era around 4th -6th centuries.

We are not connoisseurs of Chinese Buddhist art and cannot comment particularly on the stylistic differences between the sites but did find visiting Dazu a pleasant experience. There was the usual “foreigners price” and restrictions on photography (which we surreptitiously ignored as the attached photo demonstrates!). The sculptures are all brightly painted and 2 of the most noteworthy ones consist of a reclining Buddha and the Wheel of Life (photo).When we were there in August (a very hot month for the “furnace city of Chongqing!) the grottoes were pleasantly uncrowded (for China!)

Fusion: "Tantric Buddhism from India and Chinese Taoist and Confucian beliefs came together at Dazu"

Built in the 7th century: "The Dazu Rock Carvings are a series of Chinese religious sculptures and carvings, dating back as far as the 7th century AD, depicting and influenced by Buddhist, Confucian and Taoist beliefs." - wiki