The Hadrianic city of Italica

The Hadrianic city of Italica is part of the Tentative list of Spain in order to qualify for inclusion in the World Heritage List.

Italica is an ancient Roman town located in the present-day municipality of Santiponce about ten kilometres northwest of Seville. The proposed property encompasses the Nova Urbs, the result of an urban planning project in the Hadrianic period (2nd century AD), which extended the boundaries of Italica to the north. The archaeological site includes the remains of the amphitheatre, the third largest in the Roman Empire at the time, and well-preserved mosaic floors of residential buildings.

Map of The Hadrianic city of Italica 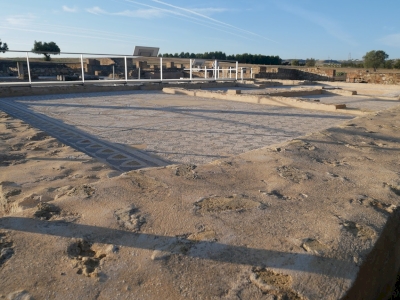 My previous visits to Sevilla had taken place, before Italica was chosen as site of the dragon pits of Game of Thrones and way before the Spanish added Italica to their tentative list in 2019. As such, I was not aware of the site and never visited.

On my latest trip to Spain, Samuel argued that the mosaics are great and that Spain would nominate the site soon. As much as I enjoy another reason to spend late autumn in Andalucía, I figured I should tick this off while at it. So... I did a pretty long day trip from Ubeda via Cordoba for the Medina to Sevilla. The next morning, I took a local bus to the site.

Italica is one of those sites where the impression I got on TV and the impression I got on site were different. While the center of the amphitheatre  with the basement is iconic, the ranks are more humble. To me, the site is less about the theatre and more about the planned Roman city  (by emperor Hadrian) with town houses etc. Across the street, there is also a Roman theatre. I am not sure, though, if it's part of the nomination.

Had the last season of Game of Thrones not been such a bummer, I think the media attention and the fans would have carried it to inscription, disregarding any consideration for OUV. With the series going out on a low note, I think the drive for inscription is weaker. Still, this is Spain and they are very well at putting more sites on the list.

Personally, I would not favor inscription. While iconic on TV, the amphitheatre paled in comparison to other amphitheatres, e.g. in southern France. or Tarragona. Highlight are the town houses with the mosaics. Nice, but it doesn't feel as if Italica is closing any gaps.

Sevilla is well connected by train to most parts of Spain. However, the bullet trains (especially direction Madrid) require a reservation and may sell out. The regional trains (MD) don't, but run far less frequently. Benefit: MD trains heading South have a second stop closer to the city at Sevilla-San Bernardo.

In Sevilla, you can take a bus from Estación de Autobuses Plaza de Armas. Google maps knows the connection, but not the proper departure location. The bus starts in the bus terminal, not at the bus stops on the street. I nearly missed my bus as I was waiting on the street. If you find the bus station a bit confusing, it's easier to catch the bus at Chapina V across the river. You also get nice views of the river.

Obviously, you should visit Sevilla. Around Sevilla, are multiple Olive plantations that are part of the proposed Olives of Andalucia tentative site. 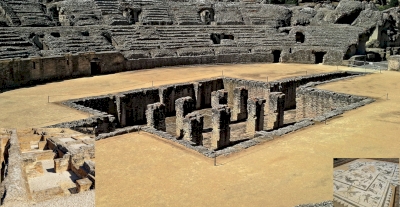 Italica was on the top of my list for Spain mainly because of the filming location used as the Season 7 finale of Game of Thrones. A great location indeed. It doesn't quite compare to big sites like the nearby Sevilla but it's a classic "ruin" that perfectly fits to world heritage.

Entrance was free even for non-Europeans at the time, the website states €1.50 which isn't a lot for the massive amount you get to see. The entrance to the site was also on the other side of the area which was temporary due the film crew (read: set construction) using the main access instead. Everyone was greeted and as soon as they figured I'm not Spanish I was just shuffled along inside, the rest was offered a guided tour (I assume not for free).

It is one of the biggest sites of Roman ruins although it is very ruined. A lot of of the main paths go along very short walls and column pieces - not very impressive by itself but after it took me 20 minutes to walk around I figured this place is REALLY huge. The amphitheater is the biggest draw and the location of the GoT scenes. Not only that but it could house 25,000 people, that's a lot and maybe the entire town! Due to the upcoming filming the site was partially blocked off and it was not possible to walk inside at that moment, as the site is to make a return in the eight season of the show. The second biggest draw are the mosaic floors - beautiful. Third, the thermal baths. Well I didn't find them as impressive as Rome or even the Turkish ones that are now lying in ruins, but which Roman city didn't need a thermal bath right. You can only see the outlines now so it's a little lacking a bit of uniqueness, not that anyone would come here to see just the baths.

A must visit if you are in Sevilla.

The Hadrianic city of Italica (T)