The Fortress of Terezín

The Fortress of Terezín is part of the Tentative list of Czechia in order to qualify for inclusion in the World Heritage List.

The Fortress of Terezín comprises a fortress town. It was built between 1780-90 to defend the route from Dresden to Prague. Terezin remained primarily a garrison town. Between 1941-1945, the inner town served as a centre for the assembly of Jews prior to their deportation to the concentration and extermination camps across Europe.

Map of The Fortress of Terezín

The history of the fortress Theresienstadt has been already described in other reviews. Because of the dark shadows of shoah and suffering of human beings, so far I have been avoiding the place. I changed my mind, and traveled to Terezín on sunny Saturday of September 2021. I know the wider area around so called Porta Bohemica very well. It is the point where the Labe river leaves the fertile lowlands and crosses the Central Bohemian Uplands, which is of volcanic origin. I visited nearby medieval town of Litoměřice several times during this year, and the area is really amazing and worth-visiting even without Terezín.

I like putting everything into the context. Therefore, I visited not only Terezín/Theresienstadt but also Josefov/Josefstadt/Pless (the next day after Terezín). Both fortresses were built simultaneously for the same purpose and using the same mold in line with the most progressive trends of 80-90s of 18th Century by French architects (the Mezieres shool). Josefov (originally called Pless, but renamed in the honor of the founder, emperor Joseph II) is located in the north-east Bohemia on the confluence of rivers Labe and Metuje.

I traveled to Terezín by train getting off in Bohušovice nad Ohří, then few kilometers of walk. Josefov is also accessible by train, and now it is the part of town Jaroměř (fast trains from Prague to Jaroměř every 2 hours via Hradec Králové).

As the military purpose of both fortresses disappeared long time ago, they have been in slow but continuous decay. Both places were the garisson towns till the end of 20th Century and the Small fortress in Terezín was used as a prison (for example Gavrilo Princip, who assassinated Archduke Franz Ferdinand, was kept there). The misuse of Terezín by Nazis is well-know, and actually the reason I am against the inscription of Terezín to the list. I cannot imagine the comparative analysis of Terezín as the concentration camp, the idea is really disgusting... Now, Terezín is considered as a large monument of the shoah tragedy, and it became the touristy place, which is therefore somehow maintained and prepared for the tourists. I was surprised by the impressive appearance of the fortress and the former garisson town, which kept its historical character with almost no disturbing structures inside and around the place. However, there are still dilapidated buildings waiting for their reconstructions and new purpose.

The Josefov fortress has no dark connotations, thus I went for the guided tour to the underground labyrinths (all together 35 km long, but the tour is obviously much shorter and takes around 1 hour), which was really nice and interesting experience. Furthermore, the guide took me to the tunnels closed for the tourists after the official tour (another half an hour). Josefov is smaller than Terezín, and it is somehow abandoned now. It suffers from the "trend" started in communism that poor Roma communities were concentrated in the cores of historical towns, and it is still the case of Josefov. However, Josefov is of higher quality from the point of view of authenticity and compactness as compared to Terezín, and it has been declared as the Urban Conservation Area already in 70s, and Terezín only some 20 years later.

To sum up, Terezín is the unique fortress, which is now maintained as the monument of shoah. It cannot be inscribed to the list because of the dark connotations. The Josefov fortress would be a reasonable substitute, because it has no dark stains in its history and its appearance is pretty the same and maybe even better in a certain sense, but too many buildings need urgent reconstruction in Josefov! Thus, I am not sure if Josefov will be included to the nomination, and even what are the future plans of the Czech state party with this TWHS. What I found, the strategy to join Terezín to the Fortifications of Vauban WHS as well as proposing the new transnational nomination of the former Austro-Hungarian Empire fortresses failed so far.

PHOTO - (left) the part of Terezín fortress (ravelin viewed from the bastion) with the hills of the Central Bohemian Uplands in the background; (right) the main facade of the church standing on the main square of the former garrison town Terezín. 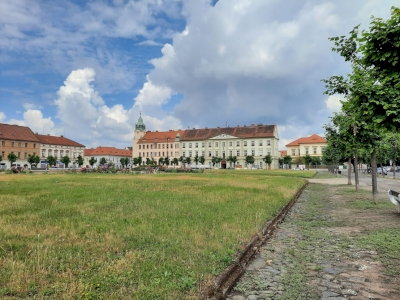 The Fortress of Terezin is a site most of us will have heard about. At least, if you are just a tiny little bit informed about 20th century history, you will know the place, but not by its Czech name. To give the site a neutral evaluation, I will resolve this later.

Historically, Austria and Prussia were bitter rivals. The border regions (Saxony, Erzgebirge, Bohemia, Silesia) between the Habsburg Empire and Prussia were industrious and prosperous and the growing power of Prussia was constantly searching to expand its influence. In the War of Austrian Succession, Austria had already lost the province of Silesia. To protect the province of Bohemia, a fortress and garrison town was built by Joseph II, the son of Maria Theresia.

The town is strategically placed at the confluence of the rivers Elbe/Labem and Eger. It sits along the main road running from Prague to Dresden. Effectively, any army crossing the Erzgebirge along the Elbe/Labem would be greeted by cannon shots from Terezin.

Terezin at its core is a fine example of a planned, late 18th century enlightened monarch town and fortress. The city is as you would expect laid out in a grid pattern. There are parks and statues interwoven across the uniform buildings. And the fornications are built as a star fortress with a second minor fort on the other side of the river. Overall, this is a very consistent period piece. The state of preservation could be improved upon, some paint here and there, but e.g. compared to Alessandria in Italy, I enjoyed my visit more.

But, as stated before, the Czech name obfuscates what Terezin actually is. The German name is Theresienstadt, in honor of the great Austrian queen Maria Theresia and now forever brandished as one of the infamous concentration camps of Nazi Germany.

Originally conceived as a ghetto for the Jews of Prague, it eventually became a logistical hub for sending Jews to the death camps further East, e.g. Auschwitz. The Jews in the ghetto had limited self government and tried to keep a civil life up. But it's heartbreaking to see drawings from kids growing up in the ghetto and then seeing their time and place of death.

While you may think that the setting, a planned town by an enlightened monarch representing European values, and the Nazi use may be at odds, they weren't. On a practical level, the fortress walls acted as prison walls; instead of keeping the Germans out, the Germans kept the Jews in. But the Nazis actually used the picturesque setting of Theresienstadt for propaganda purposes: Life in the ghetto is great, just look at the statues! There are several Nazi propaganda movies using Theresienstadt as a backdrop.

I don't think Terezin should be inscribed as Theresienstadt, the former concentration camp. Terezin the fortress wouldn't be the best addition, but I could see a case being made. However, I find it very hard to disentangle the Theresienstadt from Terezin and would mark not favor inscription.

There are trains from Usti Nad Labem. Get off at Bohušovice nad Ohří and then it's a 2-3km walk. 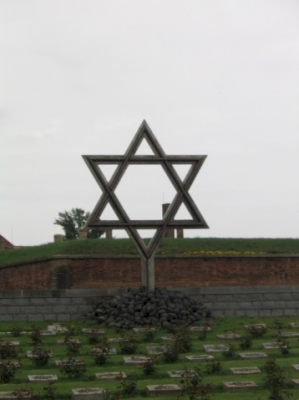 July 2005 - We have been to Terezian fort, on a classtrip to Prague. The fortress architecture is fascinating, but unfortunately it is overshaded by the Nazi history, being used as an concentration camp. We learned a lot about the "Vorzeigelager" and the stories of people who had lived here. I recommend visiting it, when you are on your way to Prague.

The Fortress of Terezín (T)