Salento and the Barocco Leccese

Salento and the Barocco Leccese is part of the Tentative list of Italy in order to qualify for inclusion in the World Heritage List.

Salento and the "Barocco Leccese" is a series of cities on the Salento Peninsula in south-eastern Puglia. The distinctive character of the cities comes from the architectural achievements associated with "Barocco Leccese," an artistic style that developed in Lecce and in Terra d'Otranto, between the second half of the 16th century and the end of the 17th century. Architectural elements of façades are crowded with decorations of human figures, flowers and animals.

Map of Salento and the Barocco Leccese 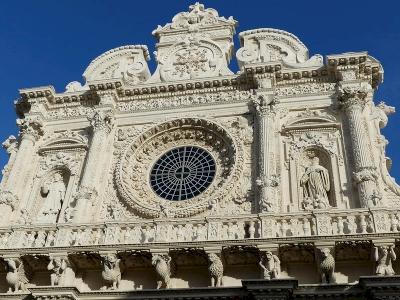 I visited this tentative WHS in June 2014 and November 2019. In June 2014 I had already visited Ostuni and Martina Franca, not knowing that they were 2 of the 11 locations that make up this tWHS. It was time to make up for this, so in November 2019 I explored the other 9 locations in Lecce, Nardò, Galatone and Gallipoli.

Ostuni is a pleasant place to visit although to me its highlight wasn't the Barocco Pugliese (which would be more apt as a title for this tWHS) but the great example of gothic architecture found at the former cathedral of Ostuni. It really reminded me of the Cathedral in Sibenik, Croatia. The Barocco Pugliese elements are scattered all over town but are more difficult to appreciate since most of Ostuni is white-washed. Perhaps the best example of baroque is the Chiesa the San Vito facade (the interior is currently closed for restoration works). On the other hand, Martina Franca is like a poorer and smaller version of Lecce and its monuments are almost entirely baroque. The highlight here was the Basilica di San Martino in Piazza Plebiscito. Unknowingly, in 2014 I had visited possibly the least impressive locations.

If you were forced to choose just one city/town to visit, this will undoubtedly have to be Lecce which actually gives the Barocco leccese its name. I spent a long weekend here and will be revisiting next year. One of the main peculiarities here is the bright white stone used (quite similar to the Globigerina Limestone in Malta and Gozo). Lecce is truly a baroque gem dotted with countless churches, chapels, gates, palaces (Palazzo Adorno deserves special mention!) and ornate buildings. The historic centre is quite similar to Malta's capital Valletta (at least the area around the auberges). The 5 locations in Lecce which are listed in this tWHS are just a small sample of what Lecce has to offer.

Heading to Lecce from Brindisi by rental car, I conveniently started with the Chiesa dei Santi Niccolò e Cataldo which is further away from the historic centre. Although the church is quite big, a series of one-way streets can make it quite hard to find so it would be better to look out for the nearby monumental cemetery. Even if you visit on the few days marked as opening days (Mondays, Thursdays and Saturdays 09:30-12:30), I'd recommend phoning before your visit to make sure with the very kind FAI volunteers when it is open. The facade is not that spectacular even though I really liked the intricate portal and the Norman architecture style of the cupola (very similar to some cupolas in Palermo). The interior vault frescoes are worth viewing although the main highlight lies in the beautiful cloister and ornate well.

Apart from the limited traffic zone hours (ZTL) and narrow streets, parking outside one Lecce's gates is ideal. The parking meters also have a handy app which you can use to pay online or by sms to extend you parking stay. The combined ticket to visit the Duomo, the Basilica Santa Croce interior and museum and the Chiesa di Santa Chiara costs 9 euros which is quite expensive. If you're not willing to pay so much a free visit to the Chiesa di Santa Irene will give you a good idea (on a smaller scale) of what you'd be missing out on. The Basilica Santa Croce (5 euros entrance fee) and the Palazzo della Prefettura have been recently cleaned and restored (photo) so it was really a pleasure to gaze up at different details of the facade every time I passed by. This basilica alone possesses enough OUV to warrant inscription on the WH list. The Chiesa di Santa Chiara (3 euros entrance fee) facade wasn't completed so it looks a bit odd. Some of the several baroque altars have gilded elements but apart from that, you won't get much more than what you'll see in the basilica. Just behind the church there's also a Roman theatre.

Another of Lecce's highlights is Piazza del Duomo, especially when lit at night. High up on the top right part of the Duomo's facade, don't miss the sculpture of Lecce's main coat of arms symbol to which the city owes its name. Not far from Porta Rudiae, you'll find the 5th location of the Barocco Leccese in Lecce, the Chiesa di San Giovannni Battista (al Rosario). The facade has also been recently restored although apparently there will be more restoration works going on in the next months.

As an easy day trip from Lecce, I drove for around an hour to cover the remaining locations of this tWHS. I started with the farthest one, the Basilica Concattedrale di Sant'Agata (also known locally as the Duomo di Gallipoli). The over-the-top facade is quite similar to the facade of the Santuario/Chiesa del Santissimo Crocifisso della Pietà in Galatone, both inspired by Jesuit architecture. The main difference lies inside as Gallipoli's Basilica is literally covered with huge paintings. Gallipoli in itself is also a very pleasant seaside town.

After Gallipoli and Galatone, we went to Nardò to visit the last 2 locations. Of all the locations, Nardò is perhaps the one which resembles the towns of the Val di Noto WHS the most. The Basilica cattedrale di Santa Maria Assunta in my opinion is not worth the detour from Lecce. However, the facade of the Chiesa di Santa Maria della Purità is quite unique, having been clearly inspired by Francesco Borromini's work. NB: Not far from here, in Galatina, do visit the splendid Basilica di Santa Caterina d'Alessandria for its magnificent frescoes, possibly some of the best in Southern Italy. It really felt out of place as it reminded me of the Urbs Picta in Padua or the Musei Vaticani.

All in all I really enjoyed visiting all components of this tWHS and hopefully it should be an easy inscription in the near future.

I agree with Nan that Lecce with its Barocco is unique and the entire town with maybe 30 or 40 churches, baroque palaces and gates deserves to be included to the WHS list. In the proposal, there are only 5 churches/buildings included: basilica di Santa Croce (main facade under scafoldings now, but it is really a gem of Meditteraen Barocco), S Giovanni Battista (the main facade under scafoldings now), Santa Chiara, Piazza del Duomo (the ensamble is so delicate!), and SS Nicolo e Cataldo (I spent 3 days in Lecce but could not see this becase it is outside the town walls and I have not noticed that this complex is also listed in TWHS nomination...). I do not understand why only these churches were selected in Lecce, because I could read the studies that positions of main facades, shape of piazzas, direction of main streets, and possition of main monuments such as Campanile del Duomo or Colonna S Oronzo or Porta Rudiae have been carefully planned by baroque masters. It is also strange to me why the Title of the nomination is "Salento and the "Barocco Leccese"" even if the site is mostly about Barocco and not about Salento region.

I also visited Gallipoli with its cathedral, which is fully comparable to churches in Lecce but it has huge oil paintings covering the walls instead of usual frescoes.

I have no time to visit other sites, because I travelled by train and it has its own specifics in southern Italy...

In conclusion, Lecce is simply great, and I must return to Lecce to see repaired facades of S Croce and S Giovanni Battista. 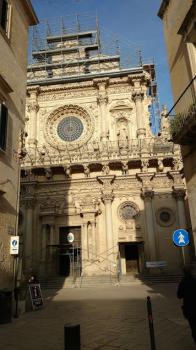 As a worldheritage traveller I have seen my fair share of Baroque sites, be it churches, palaces or towns. To be blunt, I wouldn't call myself a fan. As such I was really considering skipping on Lecce while touring through Puglia. Yet another Baroque town? In Italy? ...

As a worldheritage traveller you also know what sites are up for inscription in the foreseeable future. And a fellow traveller had posted a raving review on some site*. So I went. And to be blunt again: I am really happy I did, because Lecce is just this great. The town center is filled with scores of lovely churches and piazzas. And I experienced none of the fatigue I have come to expect from a Baroque town.

Apart from Lecce I also went to Ostuni and Martina Franca. Ostuni is situated on a hill and certainly a nice site. Martina Franca also has a nice old town. But in the end both cities pale in comparison to Lecce. Additional cities mentioned in the application are Nardo, Gallipoli and Galatone.

You can read up on Barocco Leccese, how the insular location of the Salento as well as shifting rulers created a distinct version of baroque. To me this is simply a special and unique site that deserves inscription, even though it's in Italy and even though I strongly biased against adding more Baroque sites to the list.

Martina Franca is a short train ride from Alberobello (WHS). I would do a stop at Locorotondo, a pitoresque village on a hill. From Martina Franca you can continue to Taranto or Lecce.

Ostuni is located along the railway from Lecce to Bari. Be advised that the train station is way outside of town and it's a steep, long climb to reach the city center. They also don't have a sidewalk.

Lecce is a major railway stop for Italian railways. There are trains running along the east coast up to Bari and onwards to Rimini and Northern Italy. There is also a connection via Taranto to Salerno and Naples.