The Historic Centre (Chorá) with the Monastery of Saint John "the Theologian" and the Cave of the Apocalypse on the Island of Pátmos represent a traditional Greek Orthodox pilgrimage centre.

The designated area consists of 3 parts:

Map of Island of Patmos 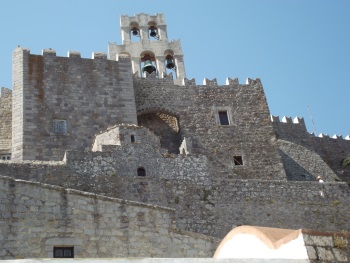 Patmos Island is reachable by ferries from Rhodes, Mykonos and Samos. From the port of Skala buses travel up the steep winding road to Chora, location of the fortified monastery of St John.

Besides the distinctive architecture of the monastery, the frescoes are quite stunning, particularly those within the chapel.

On the descent by bus from Chora to Skala I stopped off to visit the cave of the Apocalypse, a detour involving descending and climbing several steep flights of steps.

Patmos was a lovely, quaint town with very friendly people. the water there is not potable which I found surprising but the island was a gem. We were on a cruise that stopped there and we spent way too little time.

The monastery and cave were very well preserved. I toured both and just being somewhere where St. John had actually been was pretty awe inspiriing. Not enough is known of this small, beautiful and historic island and perhaps that is part of its' immense charm.

Isn't it surprising that,almost 12 years after inscription, this is the first review of this site? It isn't as though getting to Patmos is difficult; it can easily be fitted into a Greek island hopping trip (in my case after Samos and before Mykonos). Accommodation on the island is plentiful too.

The WHS doesn't include the whole island (which has an area of 34km2 and a population of about 3000) just an Old Town, a monastery and a cave. These can easily be seen in one day.

Approaching from the sea the Chora(the old town) is seen occupying the highest parts of the hill rising above the harbour with, at its summit, the monastery of St John, protected by massive walls.

On a warm and sunny day in October 2004 I was pleased to be offered a pillion ride up the winding road to the top of the hill. Many parts of the monastery are closed to the visitor. What can be seen consists of small rooms and the courtyards between them with lots of intriguing passageways. Close by the entrance is the main church; it is small, atmospheric and rather gloomy with many of the frescoes all but obliterated by centuries of candle smoke. The Treasury museum contains the customary plate, silverware etc and is particularly strong on books, manuscripts, codices and the like.

The Old Town is in some ways like a small Arab town with houses showing almost blank walls to the passer-by, though a number of tiny churches are squeezed in amongst the houses.

Part way down the hill is the cave in which John is said to have had his divine revelation and to have dictated his vision to his devoted scribes. The cave has been extended to form a small chapel. A notable feature is a circular recess(nowadays rimmed with a silver collar)in the stone wall of the cave, and in this John is said to have laid his saintly head to sleep.

Patmos has many attractions and this site should be of interest not just to WHS spotters. I look forward to another review.

Visit Greece about the Monastery

Cave Temples or Churches: Cave of the Apocalypse
Neoclassical architecture: Chora: there is a small group of neo-classical houses dating from the 19th century (AB ev)

12 Apostles: John of Patmos, the author of the Book of Revelation, was traditionally believed to be the same person as both John, the apostle of Jesus and John the Evangelist, author of the Gospel of John. Some biblical scholars now contend that these were separate individuals.
Legends and Folk Myths: Mythology tells of how Patmos existed as an island at the bottom of the sea and how the island emerged from the water by intervention of Zeus.
Mentioned in the Bible: Revelation 1 9 - John receives the Revelation
Christian Pilgrimage Sites: Exceptional example of a traditional Greek Orthodox pilgrimage centre (AB ev)
Saints' Caves: Cave of the Apocalypse where St John "the Theologian" received the "Book of Revelation"

Libraries: Monastery: containing some two thousand printed books and over a thousand manuscripts, many of them of great antiquity and beauty (AB ev)

Longest WHS names: Historic Centre (Chorá) with the Monastery of Saint John "the Theologian" and the Cave of the Apocalypse on the Island of Pátmos - 107 letters
Dubbed as another WHS: "Jerusalem of the Aegean" to reflect its New Testament Biblical significance.