Classical Karst (in Slovene language: Klasicni kras) is part of the Tentative list of Slovenia in order to qualify for inclusion in the World Heritage List. This site (or parts of it) has already been inscribed under Skocjan Caves WHS.

The Classical Karst comprises 4 areas of Dinaric Karst, showing all its typical karst phenomena and processes. One of those, the Kras plateau, gave its name to “karst" - the scientific name for a special type of landscape that developed in carbonate rock. The landscape historically also has played an important role in the biological research of the underground world. 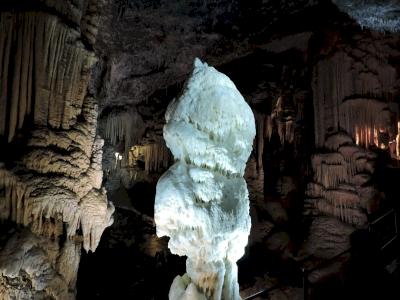 We visited Slovenia in October 2018, with a passing visit, in terms of this extension nomination,to Predjama Castle and a longer visit to Postojna Cave.

We didn’t enter the castle, what with castle overload, and I believe there is not much inside at any rate, so parking up for free for a quick photo stop was all that was on the cards. We had arrived self-drive from Ljubljana in the morning en route to Kobarid via the WHS site Skojcan Caves and the aforementioned Postojna Cave.

Postojna is well set up for tourists (possibly too well set up), becoming a tourist attraction in the early 1800s, with annual visitor numbers shy of a million. Apart from the usual cave formations, there are two main novelties here. The underground railway with which you tour the cave was the world's first railway in an underground cave, opened in 1872. The other novelty is the presence of the olm or proteus, a kind of aquatic cave dwelling salamander.

Tours were on the hour, so when we arrived early, we had a bite to eat in the onsite cafe. There is an exhibition and a zoology museum but we gave those a miss as we had researched that the elusive olm was displayed at the end of the cave tour anyway. On the hour, there was an elaborate “herding system” where we were divided by language before taking our seats on the railway, which was more akin to an amusement park ride. It took off at quite a pace and it was pretty cool zipping through a cave at speed. You are then unloaded for a semi guided tour of some features of the cave before making your own way back towards the entrance. Before you exit though, they have some olm in a darkened tank to marvel at.

This was not a physically taxing visit. Not even taking the railway into account, the paths through the cave are wide and have very much left the effect of mankind on the cave, including some war time activities. The high number of tourists have also caused some damage to some of the formations. Indeed, I have a particular memory of the guide saying “Do not touch this formation” and 5 seconds later, a tourist came up to touch it. In a respect, it was an enjoyable and novel visit, but would be far too touristy for any cave purist!

The IUCN recommendation not to inscribe outlined that potential lay in better protection and management, an extension to the Skocjan Caves site and the cave dwelling fauna. It’s hard to disagree and I suspect at least some of this tentative nomination will end up as World Heritage at some point.