The Aniene valley and Villa Gregoriana in Tivoli

The Aniene valley and Villa Gregoriana in Tivoli is part of the Tentative list of Italy in order to qualify for inclusion in the World Heritage List.

The Aniene valley and Villa Gregoriana in Tivoli is located at the foot of the city's ancient acropolis. Villa Gregoriana is a complex of wooded parks, paths, waterfalls and grottoes, as well as ruins dating to the Roman Age. It was built in the 19th century by Pope Gregory XVI, as part of a project to rebuild the bed of the Aniene River and redirect it after it was damaged by a catastrophic flood in 1826.

Map of The Aniene valley and Villa Gregoriana in Tivoli 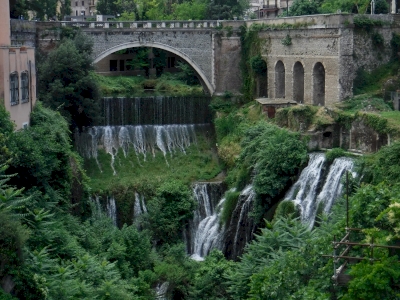 After surveying the remains of Villa Adriana on a Monday morning in 2018, I took the bus to the centre of Tivoli. From there I walked to the entrance of Villa Gregoriana. This park, built in the 19th century on the orders of Pope Gregory XVI, solved the problems of the frequent overflowing of the river Aniene and the resulting floods. The Pope's order was prompted by a major flood in 1826. Fortunately, however, the architect commissioned for this task killed two birds with one stone, designing not only a civil engineering structure, but also an exceptional garden inspired by the Romantic movement.

The visit begins with a winding descent to the bottom of the valley, along its high cliffs. The first point of interest is the view of the Mount Catillo tunnel through which the Pope had the river channelled and diverted. The water meets the Great Waterfall and falls dramatically by 130m as soon as it leaves the tunnel. This is not the most beautiful waterfall in the park, but it is probably the most impressive. A viewing platform at the base provides a nice vantage point. Still, the trail is punctuated by many other waterfalls in a beautiful setting with lush vegetation. The Siren's and Neptune's Grottas are also notable, as is the Miollis Tunnel. A few minor ruins can be found throughout the park. Finally, as the first half of the trail descends into the valley, it is necessary to finish the hike by walking back towards the town. The last point of interest on the trail is the Roman temples of Vesta and Tiburnus. From here there is a beautiful view of more waterfalls and the Ponte Gregoriano.

All in all, I really enjoyed my visit to this park. The nature is lush and rich and it mixes with a very interesting culture. It took me a little over an hour to complete the whole tour. Yes, the visit is relatively short, but it is well worth it. I do not believe that the Villa has an outstanding universal value as an example of a romantic garden. I see it more as a remarkable integration of a civil engineering work into a dramatic and beautiful environment. So I give this TWHS a thumbs up. Next destination: walking to the Villa D'Este. 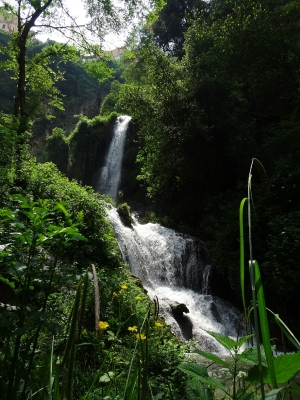 The "Villa" Gregoriana is actually not a villa, not even a building. Despite the naming and marketing, it is mainly the name for a hiking trail going through the valley of the river Aniene near the small town of Tivoli, which is better known for two other WHS sites, the more approriate named Villa Adriana and Villa D'Este. Although sometimes described as a park, the valley looks like a natural forest. There are some ancient remains, but they are so insignificant that they are barely worth mentioning. The river Aniene tumbles down the valley through various waterfalls, although most of the water is now redirected to avoid catastrophal floodings. The main claim to fame, however, is the connection with 18th century romanticism. The rugged stone formations, the waterfalls and the village high above it, complete with roman ruins, do indeed create a spectacular scenario. It takes around 90minutes to cross from one side of the valley to the other, and only a few more to get back to your start position. The nice walk will lead you to various vistas, waterfalls and grottos. All points of interest have fancy names, but not all detours really lead to something astonishing. The grotto of the sirens (or is it mermaids?) and of neptune are really worth it, the other sideways can be skipped if you want to conserve your energy. And that leads to the main problem with the site: It's just not in the same league as the other two WHS sites in town. Most people will go to Tivoli as a day trip from Rome, and if you try to cram all three "villas" into one day (I did), you will need a lot of stamina and will probably not be able to reproduce the dreamy enthusiasm of 18th century poets. What remains is a very nice, but strenuous hike with a bit of marketing cheese thrown in (like a hefty entrance fee).
I do not really think that the Villa Gregoriana is important or unique enough to be a WHS, and the small town of Tivoli does not really need a third one. However, if you do have a bit of time and energy left, it is certainly a beautiful trail with a dash of nature, culture and 19th century engineering thrown in.
Visited May 2018.
Importance 2/5 Beauty 3/5 Uniqueness 3/5 Environment 4/5 Experience 3/5

Villa Gregoriana was temporarily part of a combined nomation with Villa d'Este (1995-2001), but was withdrawn before Villa d'Este became a WHS

Unesco Website: The Aniene valley and Villa Gregoriana in Tivoli

The Aniene valley and Villa Gregoriana in Tivoli (T)