La Moneda Palace is part of the Tentative list of Chile in order to qualify for inclusion in the World Heritage List.

La Moneda Palace is an early 19th century former mint and current seat of the President of Chile. It was built in a pure neoclassical style by the Italian architect Joaquín Toesca. During the military coup of 1973, the Chilean Air Force bombed the palace at the request of the army. Major restoration was needed and completed in 1981 true to its original architectural concept. 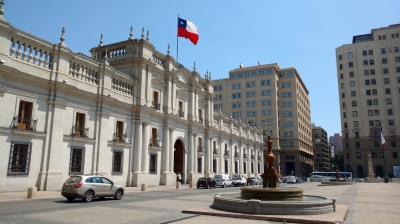 On my first day in Chile I decided to tick off all TWHS in the town center while at the same time getting a grip on my jet lag. The La Moneda Palace and the San Francisco Church and Covent are both 1-2 blocks apart in downtown Santiago de Chile and can be combined into a leisurely visit of the city.

The Spanish had several mints in South America. The most famous one was the one in Potosi. Most dated from the 16th century. In 1750 a mint opened in Santiago. Eventually a new mint was constructed: the La Moneda Palace. After Chilean Independence it continued to serve its function as mint (1814-1829) and eventually was turned into the seat of the president (1845). It is to this day the seat of the president.

Every once in a while a nomination text can make you giggle:

[D]eemed by some specialists the best and most harmonious civilian building of the Colonial America.

Some "specialists" without a reference... Good to know. The Palace may be a symbol of national pride and history, but it does not belong on the list.

Well, if I was to do my Chile trip all over again, I would cut Santiago short and head from the airport to Valparaiso on the cost. Santiago is popular with backpackers but there is very little to do and see.

Originally I had planned (and paid for) a day trip to Sewell, but the trip got cancelled due to weather. I spent the day rafting on the Maipo river.