Ancient Buddhist Site of Sarnath is part of the Tentative list of India in order to qualify for inclusion in the World Heritage List.

Sarnath is one of the four places of Buddhist pilgrimage, the Deer Park in Sarnath is where Gautama Buddha first taught the Dharma. Several remains of temples, stupas and monasteries from the 3rd century B.C. to 12th century A.D. can be found here. Also a base of an Ashoka Pillar has survived. 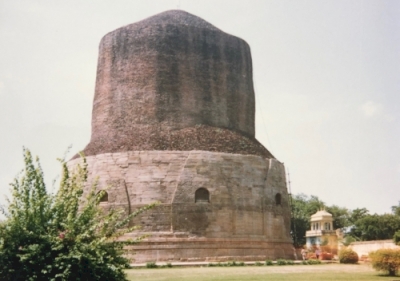 Sarnath is an important Buddhist pilgrimage site just outside Varanasi, 1 of the 4 most spiritually rewarding sites pointed out by Gautama Buddha himself. Or as I have seen it described less poetically: “the location where Buddha gave his first sermons in a deer park”. There are some indications that Sarnath might be India’s nomination for 2021. Maybe surprising, as it has been lingering on the Tentative List since 1998 without noticeable action. The recent reports in the news state that “a 600 page nomination dossier is being prepared” – which may even take a few years beyond 2021!

I visited Sarnath on a North India trip in 1993. I did consider Varanasi the highlight of that trip, but I have no notes about nearby Sarnath left. The photo album contains 4 photos labelled ‘Sarnath’, which is quite a lot from pre-digital times:

What I did not see or do not remember having visited:

I am wondering on what criteria India is going to pitch this site. Is it really necessary to have all 4 main Buddhist pilgrimage sites covered as a WHS? Has the current Indian government a positive attitude to Buddhist sites at all? What besides that intangible value does it offer? Or they may take a non-religious approach: the official site description only counts 154 words, of which none is “Buddhist”. However “Mughal”, “Ashokan” and “brick” are there. Mughal has already 9 connected sites, Ashokan 5 and brick architecture even 80. So I guess we should be prepared for a typical Archaeological Survey of India nomination, if it ever materializes at all.

Visited this site for the 2012 Kalachakra. Very spiritual place and quite an interesting archaeology museum too. Easily reachable by taxi from Varanasi.