Lena Pillars Nature Park is a rock pillar landscape made by freeze-thaw processes and fluvial removal of debris.

It was formed during the Cambrian era. The pillars line the banks of the Lena river, and are up to 100m in height. 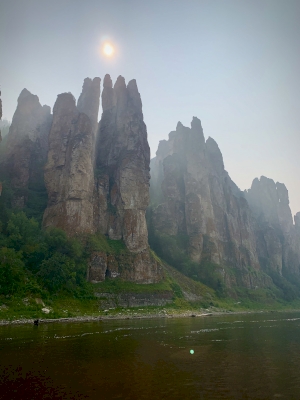 Visited this remote site in August 2020. Yakutsk (population over 300 thousand) is one of the largest cities not accessible by road full year. It seems that Lena Bridge would finally be constructed by 2025, meaning that the city will be connected with federal roads. Current ferry system can only operate during summer time, requires up to 4-5 hours waiting during peak time, then it takes 1.5 hours for ferry transfer itself via 16-km fairway. During winter, the road goes on ice and becomes dangerous at border temperatures. Yakutsk is the mammoth and diamond capital of Russia with some dedicated museums and exhibitions. I also booked a small group full-day tour to Lena Pillars through Bolot (Visit Yakutia), the same provider as was used by Martina Ruckova You first drive 100km via deteriorating road to Bulgunnyakhtyakh, where you transfer into a speedboat and travel remaining 100km by boat along Lena. En route the captain shows petroglyphs of two big mooses at the cliffs near Elanka village and stops at huge 200-meter sand dunes of Tukulany. Lena Pillars represent a 35-40 km stretch of beautiful cliffs of 200-300 meters high along Lena River. The pillars are exposures of the Cambrian period (570 million years ago), when this region was the bottom of the sea. Many trilobite fossils were found here. There is a visitor center with entry price of 300 Roubles to the National Park. The wooden staircase (1.6 km long) leads to the top of the pillars, where it is possible to enjoy beautiful panorama of Lena (at some points its floodplain is 30 kilometers wide!).

I liked the site, the photos don't fully reflect the beauty of the pillars, which sometime resemble ancient human-made reddish ruins set along enormous Siberian river. Upon return back to Yakutsk, I enjoyed the delicacies of the local kitchen, such as foal meet and local boil fish. 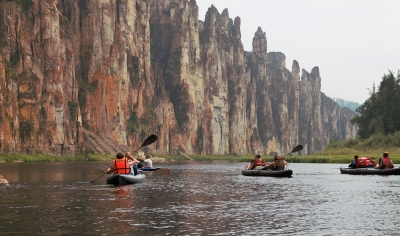 Once you have arrived in Yakutsk you will find out that the city actually offers a lot to see. The majority of the population belongs to a number of indigenous nations with most of them being Yakuts. Their culture and traditions are absolutely impressive. Also the city itself has a lot to offer like the world's only mammoth museum or a traditional Yakut village a little outside the city.

From Yakutsk there are different possibilities to get to the Lena pillars. You may book one of the ships cruising the Lena river or you make book a personal guide. I would highly recommend to book a personal guide. We decided to do a kayak tour for ten days. The starting point was somewhat close the source of the Sinaya river which is a tributary of the great Lena river. If you are visiting the Lena pillars you should definitely also try to get to the Sinaya river. For me the pillars there were even more impressive. Visiting the Yakutia is a true once in lifetime experience. I believe there are not many stunning destinations like Yakutia left which are that unknown to foreigners. 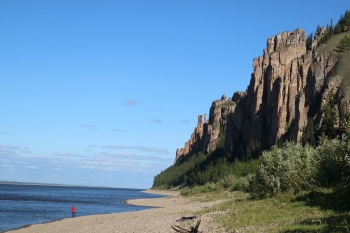 On our way to Kamchatka, we have made a detour through Yakutsk. It's a good way to get to Kamchatka, as direct flights from Moscow to Petropavlovsk Kamchatskiy are much more expensive. Yakutsk is a good base from which to see the stunning Lena Pillars and then either to move on to Kamchatka or ride the Road of Bones. There were three of us and we booked a tour with local tour operator named Bolot (from Visit Yakutia), who arranged a three-hour return car ride to the bank of Lena River and a boat ride from there.

Overall it takes four hours to reach the small stretch of the vast national park that is actually open to tourists. The first magnificent sights are available as you sail past the massive rock pillars and then you can reach a viewing platform on top of the range through a well-marked wooden hiking path. It's quite steep path in which you climb about 300 metres in two kilometres of hike. It is strenuous but fortunately very short, so definitely doable. From the viewing platform you can observe the pillars on either side of you, the river itself and surrounding landscape. It's beautiful.

Count one whole day for the trip if your starting point is Yakutsk - four hours there, another four hours to get back, three hours on the premises of the park. There isn't much of facilities, so bring your food for the whole day with you. Alternatively, there was a basic eatery on the riverside, so we had an early lunch on arrival waiting for our boat.

Hoodoo
Bovines: Wood Bison (introduced)
Dunes: Tukulans
Permafrost Mounds: "At Lena Pillars Park, there are ......... bulgunnyakhs (also called pingo, an ice formation)" - Pravda
Natural Arches and Bridges
Tundra
Cambrian Explosion: The site also contains a wealth of Cambrian fossil remains of numerous species, some of them unique (Brief Description)
Significant Karst Features: Frozen karst and thermokarst in permafrost 100 - 500 m thick (AB ev)
Extreme temperatures: They were produced by the region’s extreme continental climate with an annual temperature range of almost 100 degrees Celsius (from –60 °C in winter to +40 °C in summer). (source: short description UNESCO website)
Fossils: the property preserves an exceptionally continuous, fully documented, and rich record of the diversification of skeletal animals and other biomineralised organisms from their first appearance until the first mass extinction event they suffered. The Lena Pillars include among the earliest and the largest, in both tem­poral and spatial senses, fossil metazoan reef of the Cambrian world. (crit viii)

Siberia: It lies in Yakutia
Individual Rivers: The Lena river, the 11th longest river in the world

Inscribed on a single criterion only: viii. to be outstanding examples representing major stages of earth's history, including the record of life, significant on-going geological processes in the development of landforms, or significant geomorphic or physiographic features
WHC locations: St. Petersburg (2012)
Natural sites filling gaps cited by IUCN: tundra
Minor modifications after inscription: 2015