The Jesuit Fathers were sent by the Spanish Crown to the Americas to bring Christianity to the indigenous communities. These missions or reductions were theocracies, the word of the Jesuit Fathers was transmitted through the local chief. Only the Chiquito language was authorized. 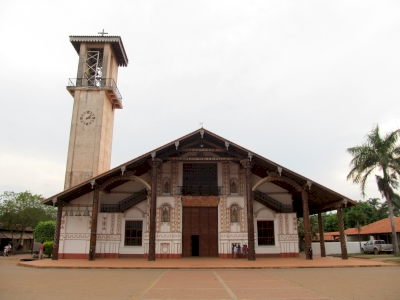 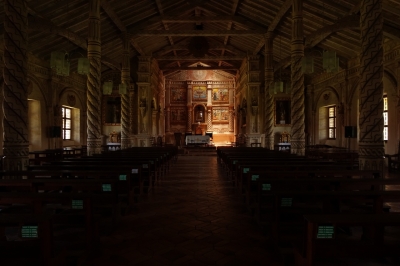 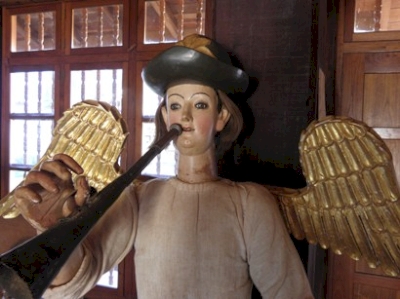 For my visit to the missions, I stayed in the Gran Hotel Concepcion for 2 nights and visited Concepcion and San Javier from there. Concepcion is the more atmospheric of the two towns. It has a fabulous square plaza, just like the Jesuits designed it. I started my visit at the Mission Museum – a great start as it has stories and models of all missions. And lots of woodwork that came from several churches. I especially liked the angels!

Somewhere I had read that the churches are only open for mass, but fortunately, that’s untrue. In Concepcion you can enter the church from the adjacent church museum. And the interior even is more lovely than the colourful outside would suggest. It has both paintings and wooden sculptures in a naïve kind of style. Not something you would see in your average Spanish (colonial) catholic church. And then there is that bell tower, all made out of wood.

I had considered doing the full circuit of the six missions, starting by train from Santa Cruz to San José and then going on to the other villages by bus or taxi. I eventually decided against it because I was afraid to get stuck somewhere for a day, after having “done” the church in half an hour. But it would be a great trip with your own transport (on a motor?)