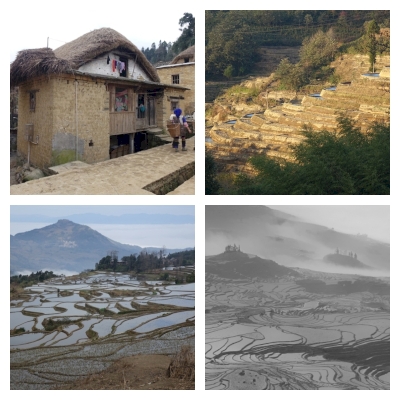 The Hani Rice Terraces are a cultural landscape in the mountains of southern Yunnan. I had been to this region before, almost 25(!) years to date on a 4-week tour of this province. From the photo album that I have left of that trip, I know that we were near Daluo. This lies close to the core zone but none of my remaining photos show the spectacular rice terraces that this WHS is known for. So in early 2019, I went back for a proper visit. It takes a full day of travel to get there by public transport from the provincial capital of Kunming. But it was well worth the effort.

The weather had been a constant worry on this trip so far. Fortunately, on the evening that I arrived in the Yuanyang area – where the terraces are located – it was sunny. The minibus driver who picked me and some other tourists up from the bus station was kind enough to improvise a sunset photo stop at one of the terraces. Glistering water-filled terraces, that’s why we came here - wow!

I was staying overnight in the core zone in the village of Duoyishu. Actually, the whole area is dotted with traditional villages: 82 of them. It was much more built-up than I expected. There’s a lot of construction going on as well. It seemed to me that this was mostly geared toward getting the residents better housing though. There are a few hotels but not that many. In Duoyishu I stayed at the Flower Residence Inn, a cozy hostel. They do have a second place to stay a bit lower down the village & a restaurant at that same spot. So you’ll invariably end up going up and down the narrow streets of the village. This was made more complicated as all streets were opened up in the middle to install drainage.

Next, we went to Azheke, also known as the ‘mushroom village’. They don’t grow or collect mushrooms here, it is named after the shape of the houses. It is like an open-air museum because at almost every house or other interesting element there is an information panel with explanations in Chinese and English. You enter the village under a reed gate, with which the Hani want to indicate the border between where people live and where the spirits live. Above the village, there is also a sacred forest where the villagers once a year worship the god Angma for happiness and a good harvest.

It had been already a cloudy morning and unfortunately, it started raining towards 11 o'clock. But we still continued our tour, although there was nothing to see from some viewpoints. One of the most beautiful and largest terraces we still could see was the one at the village of Bada. This one has more green and red than the others. 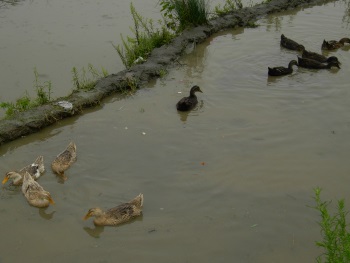 Molluscs: "snails growing in the water of the terraces consume various pests"