Etosha Pan is part of the Tentative list of Namibia in order to qualify for inclusion in the World Heritage List.

The Etosha Pan is an outstanding example of a superlatively sized salt pan that developed as a result of tectonic uplift that diverted river flow from maintaining a wetland in an endorrheic basin. Subsequent deflation by wind removed the unconsolidated sediments and exposed the saline basal clays of the basin, which is an ongoing process to this day. The 4730 km2 lake bed is mostly an uninhabited, salt-encrusted extreme desert that is only rarely flooded during exceptional wet periods. 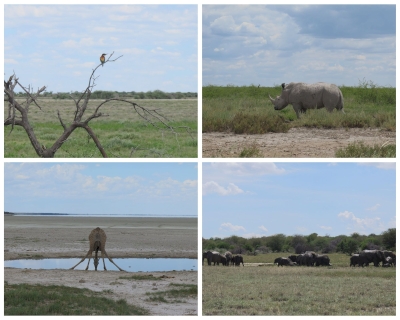 RHINO! Well, at the time I was so excited but since then I have seen many of them all over the world. My noobish question to the staff at the visitor center if they could give me hints of where there is a higher chance to run into them was just got me shaking heads. There is even a huge "DO NOT POST RHINO SIGHTINGS" in the logbook. Shortly after leaving the visitor center and veering off the main road I saw a huge boulder blocking the path - turned it out was a rhino after all. It didn't like the car coming but didn't run into the distance either. I also need to say that if you stick to the main road of the park you will not see too much and the smaller roads are rough. You can take most with an SVU but a 4x4 is recommended so you don't get stuck out there - pretty much Safari 101. As Etosha is a dry and hot park that makes it extra unbearable having to find help on foot.

Unlike most visitors I only spent a long day in the park so I didn't go far out in the distance. After having been to many national parks in southern Africa it can get a bit jading but if you come for the rhinos then you should stay longer to ensure sightings. Everything else, giraffes, elephants are pretty common all over the place and the lack of shades (the area looks pretty much all like the pics) can get a little... boring. Nevertheless the park is a gem for southern Africa and Namibia should inscribe this place asap. 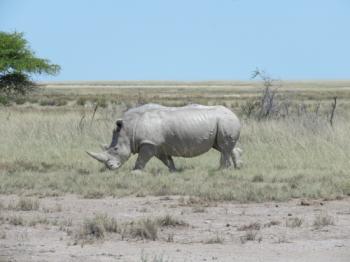 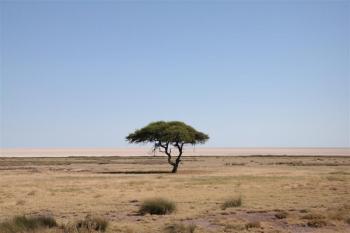 The Etosha pan is a huge salt pan (approx. 5.000 km2) and is part of Etosha National Park. Given the saline conditions, there are no (larger) animals to be spotted on the pan but they gather around a number of waterholes at the edge of the pan.

The pan itself cannot be visited, but there are a number of viewpoints where you can get a good overview of the pan. Having visited most of them, we found that the Salvadora waterhole (cf. picture) and Pan's Edge & Wolfsnes viewpoints offered the best views.

In general, a normal car will get you anywhere in the National Park, but for the more remote waterholes & viewpoints a 4x4 is recommended from a comfort point of view.