Archaeological Sites of the Ancient Shu State: Site at Jinsha and Joint Tombs of Boat- shaped Coffins in Chengdu City, S is part of the Tentative list of China in order to qualify for inclusion in the World Heritage List.

The Archaeological Sites of the Ancient Shu State is an outstanding representative of the Bronze Age Civilization of China, East Asia and even the world. Sanxingdui located in the west suburb of Guanghan city, Jinsha located in the west of Chengdu city and several Joint Tombs of Boat-shaped Coffins, reflects the unique urban planning concept, spatial sense and social structure of ancient Shu State, a typical representative of the Bronze Civilization of the Yangtze River Valley during 1900 B.C.-400 B.C.

Map of Archaeological Sites of the Ancient Shu State 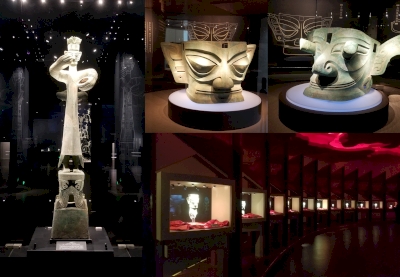 This may be China's top tentative site, culturally. The main reason it's taking a backseat it probably because there are still lots of discoveries to be made. There are three sites to this place: Jinsha Museum in the west part of Chengdu, Joint Tombs of Boat-shaped Coffins are in Chengdu as far as I understand but I did not try to visit them, Sanxingdui in the nearby city of Guanghan. I have only been to the museums because they seem worth checking out.

Jinsha, easily reached by metro, nowadays only opens at 9am (I say this because a lot of info online is wrong because I think they used to open at 8am) and costs a whopping 100 entry (again, wrong/outdated info online everything). It's still worth the large ticket price considering you get to see the legendary Golden Sun Bird which now stands for the city icon. Hard to imagine it was only discovered in 2001 and has already made such an impact on the town. The Jinsha museum is right on top of the site and thus you would feel you have really "been" to the place. More no that later. The second highlight is the Golden Mask. Trivia: the metro station symbol uses the golden sun bird.

Whereas I found the museum in town nice, I was more taken by the one in Guanghan, easily reached by high-speed train (~20min) plus a taxi (~15min) or bus (1h!). The museum is in a large park costing you a mesely 5 yuan entry but the entire 72 ticket price gives you entry to 2 exhibition halls, the park and everything else. The ruin site nearby is not accessible as it is still ongoing but this year there was a special exhibition on the excavations - badly timed to be on when the Covid-19 virus was rampaging through the country, but the building it still there and I'm think they will reuse it for a more permanent exhibition to show the excavation in the future. Highlights of these exhibition halls include the large masks, golden masks, the large statue possibly once holding something (see left). I also had enough time to roam around the park, whereas nothing special it makes the visit very enjoyable instead of shuffling from one dark hall to the next. I asked the information on the status of vising the relic site but he said it was still far off. I also think that the main portion of visitors (i.e. Chinese tour groups) would prefer a museum over the dig site so it is not a priority to open it up for visits.

The discoveries show a large impact on the Bronze Age culture. The Shu state also had a lot of trading partners reaching as far as Iran to the west. I could get into it more but I suggest you read it all on the very informative panels in the museums, available in English for the most part. Some of the relics were replicas that didn't make me so happy though.

As for the boat-shaped coffins, there was another huge discovery in 2017 and I am sure it won't be the last. 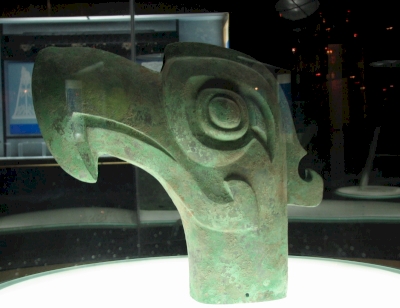