Le palais de Princes Eveques de Liège is part of the Tentative list of Belgium in order to qualify for inclusion in the World Heritage List.

The Palace of the Prince-Bishops was the religious and political center of the once independent Principality of Liège. It has its origins in the 10th century and was restored and extended several times since. The Palace has three courtyards in Gothic-Renaissance style. 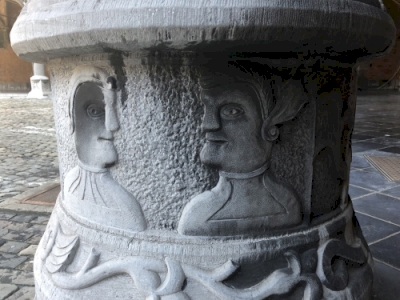 The Prince-Bishops' Palace in Liège has been on Belgium’s Tentative List since 2008. It has been visited so far by 43 of our community members, but was left unreviewed by all. This restraint is probably linked to the very low 22% approval rating they gave it. Last Sunday however I decided to give it a go, as I was also curious about the rest of the city center of Liège which has undergone favourable improvements during the past years.

The palace is a testimony to the 10 centuries when Liège was an independent principiality within Europe. It was governed by prince-bishops, who combined political and religious power. The complex used to include a cathedral as well, but that was demolished in 1793 during the French Revolution-inspired uprising against the prince-bishops.

The long main façade of the building nowadays occupies one quarter of a busy square. Cars, public transport and road works all provide obstacles to really appreciate its setting. The palace is still used for administrative and judicial functions, which prevents ordinary visitors from entering the building. Therefore they miss out on the second, inner courtyard, and the interior decorations. Defendants in court cases, escorted by police officers, do get to appreciate them though! The interior decorations date mainly from the 18th century. They are highlighted in the description and would be part of the site’s proposed OUV. However, the long list of tapestries, paintings and state rooms does not sound particulary appealing to me. This book, which you can partly browse through online, shows some of it.

The first inner courtyard of the palace is always open and accessible via the main gate. This I found certainly worth a 15 minutes’ stroll. I read that it is mainly used as a car park nowadays, fortunately it held only 2 cars on the Sunday morning when I visited here. The main attraction of this so-called Cour d’honneur comprises the 60 columns which stand on individually decorated capitals. They show fantasy figures and grotesque masques. The idea behind it is unclear – it may have been the influence of humanistic thoughts during the Renaissance, I’ve also seen it described as “A mannerist version of Ionic capitals”. Others also see a reference to the discovery of the New World: some of the sculpted capitals resemble Aztec heads with feather headdresses.

It’s not hard to predict that this will never become a WHS and I don’t think Belgium will even try putting it forward. We will probably see it removed during the next revamp of the Belgian Tentative List, which is long overdue by the way. In essence it is an 18th century gothic palace with 16th century roots, built for the rulers of the time. A typical “elitist” monument in an already overrepresented region. The city of Liège in general “has its moments” (e.g. the ultramodern Liege-Guillemins railway station) but failed to win me over like its Walloon neighbour Namur did earlier this year. I wandered around the city and along the River Meuse for some 5 hours and then had enough.