Mountain-top Hotel and Television Transmitter Ještěd is part of the Tentative list of Czechia in order to qualify for inclusion in the World Heritage List. 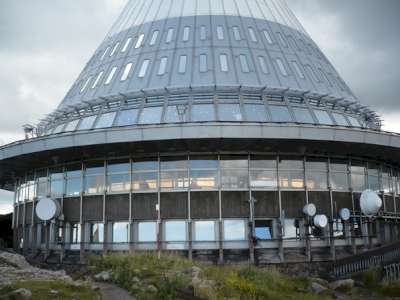 The hotel and transmitter on the top of Mountain of Ještěd belongs to the top attractions in Northern Czechia, and I visited it many times already. Reaching the summit of Ještěd by the cable car (or by walk, or by car to the nearby parking lot) is my usual half-day trip during almost every visit to the town of Liberec (in the case of good weather, of course). Other interesting places in Liberec are the main square with the huge neo-gothic municipal hall, and also both Botany and ZOO gardens.

The Ještěd Mountain is of volcanic origin, and from the orographical point of view, it is a single Mountains separated from its geological neighbors. The conically shaped transmitter on the top fits perfectly to the extinct volcano and surrounding landscape.

The hotel & transmitter represents one of the most valuable modern architecture of the second half of 20th Century in the former Czechoslovakia, and its so-called “Brussels” influences are clearly visible. The “Brussels style” was important school of design and architecture based on the Czechoslovakian contribution to the EXPO exhibition in Brussels, 1958.

I have never been accommodated in the hotel, but I usually go for lunch to the restaurant located in the round basement (PHOTO), which is an open circular space made from glass & steel.

I am maybe a little bit biased concerning this nomination, but I would be really happy if this beautiful iconic building becomes WHS in the future. However, I cannot articulate its OUV. As concerns the transmitters, another one that I also like is directly in Prague, and it was built in 70s.

All in all, I am really curious how the justification of OUV of Ještěd and its comparative analysis will look like. 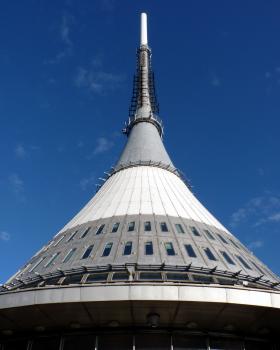 “20th C technology” and “post WWII architecture” are 2 under-represented inscribed themes. Czechia’s Jested TV Mast could help to fill both gaps, so we decided to take a look as we passed nearby in Sep 2017.

It is situated on top of Jested Mountain, a 1012 m quartz peak in NW Czechia. A wooden hotel had been built at the summit in 1906 and a cable car followed in 1933. In 1963, however, the hotel burned down. The mountain was then chosen for the construction of a TV tower and the architectural tender as issued required the construction of 2 buildings - a TV tower and a small “replacement” hotel/restaurant. The winning Modernist design, however, combined the 2 in a single building with a striking conical form to create a unique skyline. Construction took from 1966 to 1973 and the Architect Karel Hubáček was awarded the “Perret Award” in 1969. This is given every 3 years by the International Union of Architects for “Technology applied to Architecture”. Other recipients have since included, 1978 - Piano and Rogers, 1987 - Calatrava , 2002 - Foster. So, it is no “minor” honour.

Our initial plan included an overnight at the hotel. I had to wait some weeks before a vacancy became available on Booking.com for our required date. Room prices were around £64 double with shared bathroom and £110 with private facilities. Even the former was somewhat above our normal guideline level for hotels but, what the heck, to stay in a prize winning TV tower!!! In the event a re-plan required a cancellation. However our route still took us through Liberec, the nearest town, and we diverted to take the 13km road up the mountain. Maps show it going all the way to the Hotel but, around 700 metres from the summit, a traffic light holds up cars until there is a spare parking place at the top - and warns that it will cost 200 CZK (and c8 Euro) – at this point there is a much larger car park charging 100 CZK and, at 5pm in late Sept, it wasn’t even operating, so we parked and walked the rest - as did numerous other people!

First of all let’s consider the exterior (Photo) - you will see it from afar as you leave Liberec. The tower has a pleasingly curved shape, reminiscent of a Burmese zedi - though a more appropriate comparison might be a rocket - already it speaks of its era - “space ship”, “cosmos”, “progress” ……. Some might consider its construction to be a “rape” of the mountain but, IMHO (and that of others), its hyperboloid shape pleasingly complements that of the peak on which it is situated. The tower’s central core is surrounded by a series of circular accessible floors before the “technical” aspects of the TV mast take over - entrance/hotel reception, restaurant and hotel (I think across 2 floors). Visitors can enter the reception area and restaurant or at least the snack area of it, which fills around half of the circle - the waiter service restaurant and bar seemed to be closed when we were there - but I nipped in to the retro bar to take a photo of its period “hour glass” stools! The hotel is not accessible to non residents. I understand that it has c20 rooms, each with a sloping exterior wall with large aircraft window shaped picture windows giving fine views over countryside – or clouds below! All very “Star Trek” - original series 1966.

In the ground floor foyer, a video plays continuously, showing the construction process and some wonderfully “late 60s/early 70’s sophistication” B+W adverts for the hotel and restaurant. And here lies the potential value of the nomination - yes it is of technical/engineering interest but it is also a representative of its period in terms of the style now branded “retro” and to the Cold War and the “competition” between Socialism and Capitalism. Also, to the aspirations of those who were working under (and not always “for”!) the socialist system. Thus the interior designer (Otakar Binar) also receives a credit for his contribution to the final result. The rooms have of course been refurbished since the early 70s and, from the hotel’s advert, I understand that some of them have been given modern and some “retro” décor/furnishings. The accessible public areas contain some original features but others shown in those B+W movies seemed to be missing. However, if you look carefully many of the more substantial features such as the chromium hanging lights and the crystal “meteorite” wall ornaments (Appropriate as we are in Bohemia and had passed many glass factories on the road down to Liberec) were still visible. I have read that one designer “said he was influenced by Jung’s theory of the collective unconscious when he decided on orange, rather than white, tablecloths.” - but they seemed not to have been replaced!

It is worth remembering that, half way through the construction period, the Prague Spring and subsequent Soviet invasion of Czechoslovakia took place - followed of course by a hard line crackdown on dissent. One can imagine the design being accepted originally by the authorities with delight – a chance to show the world the merits of Socialism and its ability also to be smart and stylish (Ironic that it should be in such a “James Bondish” way!). In fact the construction had already run into problems with the bureaucracy and the architect/designer had set up their own “collective” to manage and complete it. During the Prague Spring (Jun 68) Hubacek had signed the “2000 words to workers, farmers, scientists, artists and everyone” manifesto and was a marked man in the aftermath of the Soviet invasion. He was not allowed to leave to collect the Perret prize and wasn’t even invited to the tower opening – and never did another major building.

This link provides black and white photos of original interiors together with contemporary colour ones. I really regret not having stayed there and not having seen those shag pile hanging “egg chairs”!!! So, you will gather that I would support this nomination - it ticks a lot of boxes way beyond just being a “TV Tower”. It is not the oldest (Alexandra Palace from 1936?) or the most technically innovative (the Stuttgart Fernsehturm from 1954 was the world’s first TV tower to be constructed in reinforced concrete) or the highest (The Ostankino in Moscow from 1963/67 reached 540m to be succeeded by the CNN tower at 553). Whilst some technical problems had to be creatively solved by the architects in a country without vast resources, it couldn’t, as far as I am aware, really claim to be that “high” on World level innovation - although the Perret prize did recognise its “engineering” credentials. I like it because it is about so much more than TV transmission and technology but captures its era technically, stylistically and politically.

The several information boards on the exterior ground floor were all in Czech but on one of them I recognised the letters “UNESCO” and it clearly described the intention to gain inscription. How active that preparation currently is and what its target might be is not clear but I have found evidence on the Web of a considered series of actions over recent years intended to achieve a successful result -

b. Early 2008 - “an inventory was carried out on the interior of the four stories of Ještěd Hotel: the entrance hall, reception and buffet (1st floor); restaurant and bar, lounge, and café (2nd floor); twelve hotel rooms and one suite (3rd floor) and hotel dormitory (4th floor). This was the first step in a comprehensive inventory that will be part of a structural-historical research on the whole structure. In connection with the proposal to have Ještěd Tower inscribed on the UNESCO World Heritage List, the inventory will serve as a source material for the purpose of renovating and adding to the interior furnishings”

c. July 2008 - “The elegant structure of Ještěd hotel has become a dominant symbol of the Liberec region. On Tuesday, just one day before the 35th anniversary, the local authorities decided to buy the building from its current owner. They are hoping to renovate the building and restore the original interiors and eventually apply for inclusion on the UNESCO list of World Heritage sites.”

d. March 2009 - a symposium of architects and conservationists met to discuss the issues involved in Jested’s renovation and preservation. See this downloadable article produced as a result (“An Inventory of the Qualities of Post-War Architecture”). Although it is mainly in Czech it does have English summaries. With respect to Jested, it recognises the importance of preserving its period interior furnishings and of some of the older transmission equipment.