The Český ráj (Czech Paradise) Rock Cities are sandstone rock clusters of Mesozoic age. There are many rocks which have been shaped by wind, water, frost, erosion, and humans into unique shapes. 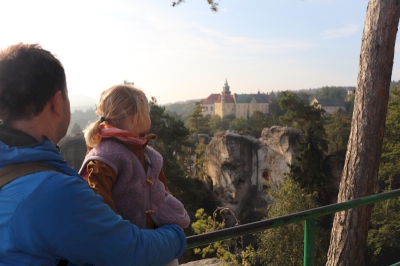 October 2021 - the Bohemian Paradise or the Saxonian Swiss we had visited a few times before and  fell in love. It definitely deserves a space on the WHS list. Now we had the chance to visit the nearby Czech paradise as well.

We arrived late in Turnov and had some knedliki before we drove into the nationalpark and stayed overnight on a parking lot in our camper. As we were getting ready to sleep someone knocked at our door and let us know that there will be some filming early in the morning, so we would have to leave by then, at least that’s what I understood after our Polish-Czech conversation. He then sat down with a candle and was guarding the requisites, a bit spooky.
We changed parking lots early in the morning and made a hike through some of the most beautiful structures and gorges around Mariánská vyhlídka with the fog still hanging over the rocks. After this nice morning hike we continued to visit some famous horses and stables. 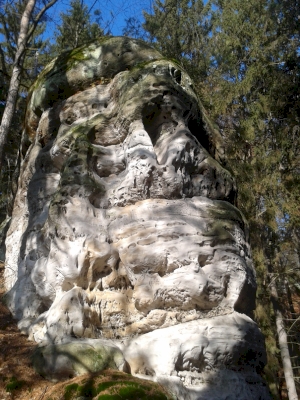 Český Ráj is not alone among the sandstone rock cities in the central Europe. There are plenty of them, for example: the Broumov area, Bohemian-Saxonian Switzerland with surrounding Elbe sandstones, several areas in Bavaria (Frankische Schweiz) and Poland.

It should not be definitely natural WHS (only exceptional natural quality is its geology, but still it is of national importance). I can only ironically comment it that Český Ráj is the classical area of recreation for poor and middle classes, and it might be included to the serial nomination with TWHS Nice and Cote d`Azur, as also classical touristy area, but for aristocracy and rich people.

Moreover, we have another hot candidate for the inscription as a natural site in Czechia – beech forests of nearby Jizerske hory Mountains!

I visited the area (Hrubá Skála, Prachovské Skály, Malá Skála) for recreation several times, in most cases as a kid with my parents, and it was always an impressive experience to walk through the rock cities. It is easily accessible by public transport from surrounding towns Turnov or Jičín.

Apolena rock city is very small and the entering is not recommended because of a danger of collapsing rocks, but I safely approached it from the upper sides from meadows around the ruins of Trosky castle. The area is covered by dense forest, but rocks were visible in February. The layering and erosion of the rock blocks are fascinating (PHOTO). They are pristine white on the sides due to their continuous diminishing, but green on the top because of the lichens and other flora.

Hrubá Skála rock city is the biggest and most important area of sandstone formations in Český Ráj. Thus, it is very touristy (it was even in sunny but chilly February). I walked along marked tourist routes with the castle Hrubá Skála, now hotel, as their focal point. There are nice trails to the gorge around the castle, further, the blue route goes directly through the most impressive parts of the rock city, while the red route goes parallel and there are excellent views from above. The rocks are really impressive and much taller than one can even imagine. It is also fascinating that the extent of erosion of the rocks is different in different layers.

Even if the rock cities are very nice, I cannot imagine that this would ever become WHS. 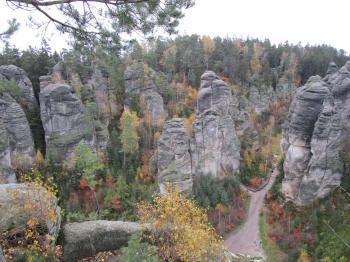