Sacred Titicaca Lake is part of the Tentative list of Bolivia in order to qualify for inclusion in the World Heritage List.

The Sacred Titicaca Lake is a large, deep, freshwater lake in the Andes at 3,812m altitude. The shores and the islands are rich in archaeological sites (from the Tiwanaku and Inca) and colonial heritage in for example the town of Copacabana. The main islands on the Bolivian side are the Island of the Sun and the Island of the Moon. 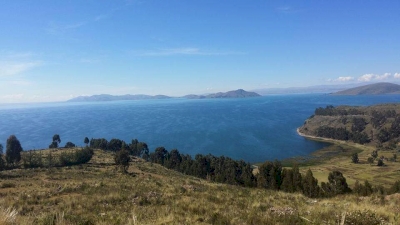 Back in April 2016, my family trip brought me to South America, and in crossing between Bolivia and Peru, we decided on availing of services by Bolivia Hop. On our day with them, we stopped at a viewpoint near the Tiquina Strait overlooking the smaller section of the lake. It was truly a beautiful scene of the green fields tumbling down into the lake. We then reached the strait, where the bus (without us inside), was floated on a raft to the other side, the Copacabana peninsula. Finally, we arrived in Copacabana in time for lunch, a little time to chill by the shore, and of course, a short tour by boat to Isla del Sol. Unfortunately, as my family was unwilling to walk or to separate from me, I wasn't able to hike the trail across the island, but I was able to climb up to a small Inca structure by the pier and walk on the preserved Inca path.

The lake appears to be on the T-list as a mixed site, which is interesting. The various Inca remains on the islands and the pleasant little colonial towns on the shore can constitute a complete site. The whole lake can even be seen as a cultural landscape with many common themes between the minor sites between them. While I'm unsure of exactly which natural aspect the basis of such a claim would be, but it's safe to say the lake is quite a phenomenon in its history, cleanliness, size, and altitude. Titicaca as a whole is just a site of extraordinary beauty, importance, and phenomena, and it definitely does contain OUV in multiple aspects. The land around the lake is a bit of an agricultural landscape as well, while the numerous Inca sites are all well-preserved. Copacabana is said to have a nice church, but unfortunately, I was unaware of it at the time, and I therefore was unable to go in. Lastly, the pristine state of the lake itself supports a diverse ecosystem, probably with many endemic species of fish, and other fish, such as the trout that we were served in the restaurant. 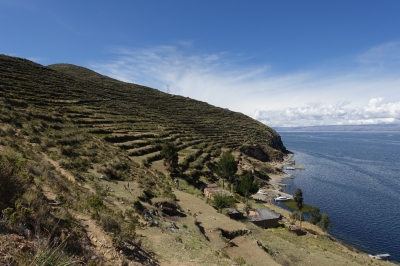 Whatever was missing for me on the Peruvian side of Lake Titicaca was readily there on the Bolivian side. I had boarded a bus from Puno to La Paz with a short tourist stop to visit Isla del Sol. We took a boat ride along the coast line and then landed below an Inka ruin.

Due to the limited time window I only hiked along the Southern tip of the island. You reach the main village Yumani after 20min or so on a rather steep and original stone path. With more time, I would have ventured further North where more prominent ruins are found.

The Bolivian side of the Titicaca Lake was way more interesting than the Peruvian one. While Copacabana is a fairly touristy place, the Isla del Sol is still relatively quiet and original. The terraces look more authentic with mule manure decorating the trails. Add to this the presence of multiple pre-Columbian ruins and you have a very nice site. Apparently, the Isla de la Luna is similar or even superior in quality. So, I think this is a very nice and well worth inscription.

The hub for the Isla del Sol and Isla de la Luna is Copacabana. It's a nice little beach tourist town and well worth visiting. Copacabana is well connected by bus to both La Paz and Puno. As stated you can do a little bit of Isla del Sol as part of the trip between the two, e.g. with Bolivian Hop. If you want to explore the islands in full, you probably have to stay over night in Copacabana or on the islands.

The Portugese influenced, cathedral in Copacabana is well worth a visit if you are in town. You can also spend some time on the beach. Tiwanaku is not that far, but may require a cab ride to get to.