The Karlstejn Castle is part of the Tentative list of Czechia in order to qualify for inclusion in the World Heritage List.

Karlstejn Castle is a large, 14th century Gothic castle. At the time it was a safe depository for the Imperial and Bohemian Crown Jewels, and the extensive Imperial collection of holy reliquaries. The castle fell into disrepair in the 17th century; a neo-Gothic reconstruction was carried out between 1887 and 1899, giving the castle its present look.

Map of The Karlstejn Castle 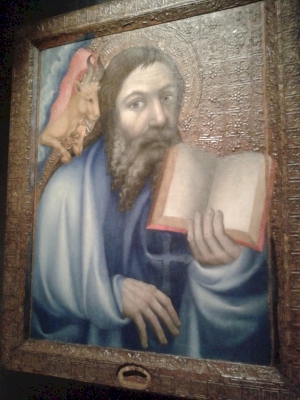 Karlštejn castle is one of the top tourist destinations in Czechia, frequently visited also by locals due to the popularity of emperor Charles IV, the founder of Karlštejn. Thus, the castle is an epitome for medieval building for every Czech person. The castle was built on a limestone rock in the mid of 14th century, originally for private purposes of the emperor. But it has changed very soon, and Charles IV turned the castle to the strongbox that should protect imperial jewelry of the Holy Empire (now, it is not there). However, the most important was the sacral function: The castle was designed as the giant reliquary with parts of interior decorated by precious stones, glass incrustations, frescoes and desk paintings by international artists such as Nicholas Wurmser from Strasbourg, Tommaso da Modena, and especially Magister Theodoricus who designed the decoration of S Cross Chapel.

The castle is easily accessible by train from Prague, and it is located in Bohemian Karst protected area. It is hidden in the side valley of river Berounka, but its visual impact is iconic. However, the current shape is the result of a purist reconstruction by Josef Mocker in 19th century. It was the main reason for postponing the nomination as the clarification of the issue of authenticity was requested by ICOMOS. Another problem is a desolate state of some parts of the castle and really outdated visitor center. Actually, there is no visitor center or even a shelter in case of raining at all but just a small window for buying tickets. The construction of large visitor center is planned for this year, but it has not started yet.

I visited the Karlštejn area several times. Mostly I walked only around and did not enter, because Karlštejn is now in many ways a tourist trap, and you can find all the souvenir shops, tourist-trap eateries, stalls with quasi-traditional “trdlo” etc., all condensed in small village under the castle. It discouraged me from thorough exploration of the castle interior for quite a long time. Once, I visited the guided tour No.I that goes to parts of mean historical and cultural importance, which are not extraordinary (as noticed also by Ilya Burlak in his review).

The Easter Holidays 2019, I decided to visit the tour No.II that goes to the most sacred places of the castle with limited access (ticket price 20EUR for tour in Czech or 30EUR in other languages; it is necessary to book it well in advance).

The tour goes to the church of Virgin Mary in the Lesser Tower and to the chapel of S Cross in the Great Tower, which used to be one of the most sacred places in Europe. The main feature of the tour is walking up and down through narrow corridors with steep steps – it should symbolize the ascending from our earthy world through the purgatory with a final destination in the heavenly Jerusalem. The church of Virgin Mary has very simple square shape with flat wooden ceiling but it used to be decorated by vast gothic frescoes with Apocalypse thematic that, sadly, survived only in fragments. They are inspired by the revelation of S John, and I have never seen such descriptive interpretation of this topic. However, the highlight of the church is the cycle of three large frescoes of the emperor receiving the thorns and sponge of Jesus martyrdom from French and Greek kings and manipulating with reliquary. The depictions of Charles IV are very anatomically realistic, and I immediately fell in love with his a bit gay colorful clothes and shoes!!!  After that, only a glimpse is allowed to an adjacent small sanctuary (nowadays called as chapel of S Catherine) – it is an intact gothic space covered by colorful incrustation, gold and frescoes of the emperor, his wife, Our Lady, Crucifixion, etc. The tour ends in the chapel of S Cross. It was accessible only by wooden bridge from Lesser to great Tower and side staircase, which is decorated by the cycle of frescoes depicting life and martyr death of S Wenceslas and his grandmother S Ludmila (all partly destroid and not fully "readable"). After that, visitors enter the Eden with large collection of Saints remnants (the portable ones already disappeared, but it is quite probable that there are some hidden under the decoration): The chapel of S Cross is covered by originally 130 gothic wooden-desk paintings of Magister Theodoricus (1 is stolen, and ca. 5 are placed in national Gallery and replaced by copies) that is extraordinary style of church decoration. besides wood, the walls are decorated by incrustations and golden rods with thorns, the gothic vaults are covered by gold and lenses of Venetian crystal in shape of stars, Sun, Moon, and 7 Planets. The chapel is divided by golden fence that protects the altar and originally also the Imperial Jewels. The other rooms of the tour are of lesser importance as compared to extraordinary sanctuaries of Virgin Mary, S Catherine and unique S Cross.

I do not know if this TWHS is still active. My opinion is that OUV can be found in the decoration of the interior with no less impact than Scrovegni Chapel in Padua. Is it enough? Anyway, it belongs to the limited list of world-class monuments in Czechia, together with Prague, Český Krumlov, Villa Tugenthat in Brno, Telč, and West Bohemia Spa Triangle.

PHOTO: It is not allowed to take photo during the tour. Therefore, I include a photo of the desk painting of Lucas the Evangelist by Magister Theodoricus that is now together with a couple of other paintings from Karlštejn on display in National Gallery in Prague (I took a photo a week before my visit of Karlštejn). It is unbelievable that S Cross Chapel in Karlštejn is decorated by 130 of such pieces! 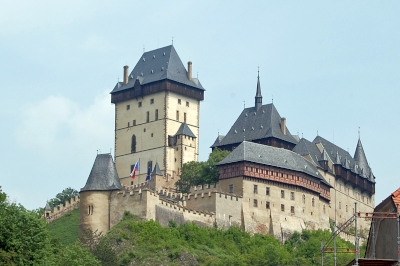 My one and only visit to Karlštejn Castle took place nearly a decade ago, but seeing that there are no other reviews for it, even a dated one might be useful.

The grand castle is located some 30 kilometers away from Prague, and most visits to it are likely to be day-trips from the capital. If you join one of the many organized tours, it will pick you up at your hotel and deposit you back in under 5 hours. If you go on your own, budget 6-7 hours for the whole trip, including getting to the central train station in Prague, possibly waiting for the next train (they run once every 30 minutes), the 35-minute ride, then getting to the castle from the station, and later doing it all again in reverse on the way back. The visit to the castle itself takes just over an hour. The visits are guided, the groups depart at specific intervals, so there could be some additional wait there.

Walking up the hill to the castle from the train station may easily take an hour for the less athletic, but will definitely take at least 30 minutes (an organized tour will not bring you any closer to the top of the hill - you still will have to walk up). Thankfully, the village along the road up to the castle is full of souvenir shops and eateries, and also has a couple of nice art galleries. Some of it has a whiff of a tourist trap, but for those who are not concerned with time, it offers welcome additional diversions.

Is the effort worth it in the end? Not unequivocally. At the castle, you will visit six or seven halls and hear some interesting commentary, but not much of the interior is going to bowl you over. The views from the ramparts are quite nice, but some of the higher points of the castle are off limits for the visitors (or were in 2010). If you are a true aficionado of the Middle Ages history, you will find the castle and the village quite enchanting. The average visitor might be somewhat disappointed. I would give it two and a half stars at most.

Need a study of its restoration