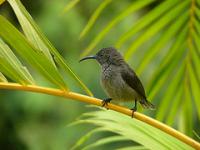 Tiny frog endemic to Seychelles to be monitored by audio recorders (06.12.18)

Eradication of ring-necked parakeets in Seychelles could be confirmed this year (28.01.17)

First Coco-de-Mer poachers of the year arrested in Seychelles (06.02.15)

Located in a microstate: Seychelles (455km2 / 80699 inhabitants)
Indian Ocean
Situated in one of the SIDS: Seychelles 1983