The Atlantic Forest is unusual in that it extends as a true tropical rainforest to latitudes as high as 24'S. This is because the trade winds produce precipitation throughout the southern winter. In fact, the northern Zona da Mata of northeastern Brazil receives much more rainfall between May and August than during the southern summer. 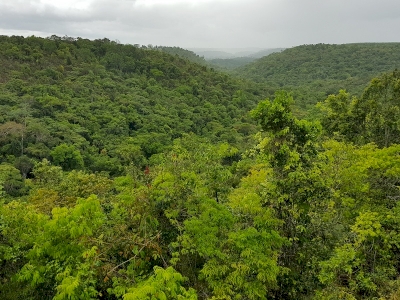 We got to the Visitors Center at 1.15 pm and although the park was officially open, tourists were only allowed in until 1.00 pm. Fortunately, the ranger took pity and called a guide who arrived in half an hour and took us to the park. I paid 140 reais for admission tickets for the whole family, with a guide and an off-road car included in the price.

A guide in Pau Brasil is essential, as is a decent 4WD car (although you can also visit the park by bike, tours are organized from Arraial d'Ajuda). From the Visitors Center to the hiking paths it was necessary to drive a few kilometers in a very dense forest, on a terrible road. There are about 10 different routes available on site, but due to the late hour, we were able to take a few shortest ones.

Pau Brasil National Park was established, among other things, to protect pau brasil, a tree which, due to its structure and colors, is extremely popular in the furniture industry and is also used to make violin. Pau brasil is a symbol of Brazil, and the whole country takes its name from it. There are indeed a lot of those trees in the park. The park's symbol is also animals, especially harpy eagles, and there are even jaguars and cougars there. Unfortunately, during our visit we did not meet virtually any animals except a large spider. Nevertheless, we enjoyed the trip very much, even though it was not our first visit to the rainforest. The forest in Pau Brasil was exceptionally dense and wild and it was especially beautiful on the viewpoints.

Of course, the question arises why Discovery Coast has been separately inscribed in a situation where it protects practically the same things as  Atlantic Forest South-East, which was inscribed in the same year. From a layman's perspective, these two entries should be combined into one. Atlantic Forest South-East contains many more components and is therefore probably much more diverse, but there are also many places of interest to be found on Discovery Coast.

Discovery Coast is where the Portuguese first noticed the Brazilian land. It was in 1500, near Trancoso - today a tiny, but very charming town with colorful houses. Next door are the popular resort of Arraial d'Ajuda and the beach town of Curuipe, and the whole region is known for its great beaches. The closest major city is Porto Seguro, which has air connections to the rest of the country.

It was surprising to me to see this WHS hasn't been yet reviewed. Discovery Coast is by no means a difficult place to reach or uninteresting area to be looked down, all the way around. It is made up of several Atlantic Rainforest reserves, most of them close to Porto Seguro, a vibrant city (and with a famous carnival) that is also situated in the area where the first Portuguese colonizers arrived in Brazil (year 1500).

I have visited this reserves many times when I was a kid and also recently with my father. I could not see (and I doubt there is, at least for the casual tourist) any significant distinction between Discovery Coast Atlantic Forest (in States of Bahia and Espírito Santo) and the Atlantic Forest South-East situated more southerly (in São Paulo and Paraná States).

In any case, the exuberance of the tropical rainforest (along with good trekkings, waterfalls, birdwatching, etc.) usually pays off the visit. Do not expect, however, the same facilites and tourist infrastructure that can be found in Iguaçu or other more famous sites in Brazil.