The Chankillo Archaeoastronomical Complex is an archaeological site occupied between 500 and 200 BC and having ritual, astronomical, administrative and defensive functions.

The most outstanding construction is a series of 13 stone towers built on the crest of a hill, allowing the date to be known on any given day and to follow the movements of the sun throughout its annual cycle. It is believed to be the oldest astronomical complex in the Americas. 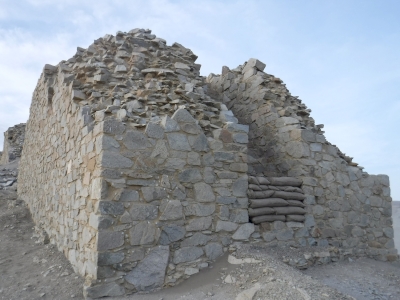 I visited Chankillo in February 2020. Although my visit was very similar to Lauren's, I believe this site deserves more than a single review. Like Lauren, I visited the site at sunrise, with the help of Aleka Tours.

Before 6am, they picked me up from my hotel in central Casma in a gleaming blue dune buggy perfect for driving through the desert of the Peruvian coast. I was guided by a Spanish-speaking archaeologist and an English-speaking guide. Although the presence of the two women made the tour more interactive and complete, my level of Spanish and the archaeologist's level of English would have allowed me to understand 95% of the tour. Please take note that the road leading to the site (AN-1306 / El Castillo on Google Maps) was closed by a chain and guarded by a man at the time of our visit (and this, despite the early hour!). My memory is hazy, but I think the guide was asked to pay a fee.

We started the tour at the ruins between the 13 towers and the concentric wall structure. A platform indicates where to stand to watch the sun rise and determine the time of year. The sky was clear during my visit and I could see the sun appearing between the towers. It is impressive to think that this site was built so long ago and that these people already had a fine mastery of astronomy. We then headed towards some stone walls, ruins of buildings at the foot of the ridge on which the towers are located, before climbing the ridge itself. Some of the towers (especially those at the ends) have been restored. The middle ones are essentially stone stacks without the square shape of the others. It is not allowed to climb any of the towers and sand bags blocked the way to restored ones on my visit. The ridge offers the best view of the ruined dwellings to the south-east of the ridge, as well as of the concentric buildings on the mountain to the north-west. Both these areas are still inaccessible.

In the end, this visit is short and this site is not the most impressive, but it is still very interesting! I was able to see some burrowing owls as I left the site. Also, Casma is an easy stop between the hotspots of Trujillo and Huaraz. Buses serve Trujillo (mostly Lima-Trujillo buses), while collectivos go up to Huarez when they are full. Hopping on a tuk-tuk will also take you to the archaeological site of Sechin Bajo, reputed to be one of the oldest on the continent, and home to some fascinating engravings. On a final note, like Lauren, I can also highly recommend the services of Aleka Tours for your visit to Chankillo.

I made it a goal to visit all of the UNESCO sites in Peru and as many of the tentative sites as I could during a five-week trip in 2014.  Of all of the sites, Chankillo was by far the most challenging to visit because of the lack of infrastructure and information online.  When I saw that it's being put forward for a nomination in the near future, I figured it was time for a review.

Chankillo is an astronomical complex in western Peru, about half way between Trujillo and Lima.  It's claimed to be the oldest astronomical site in the Western hemisphere, at over 2000 years old.  There are some ruins of various buildings, but the highlight are 13 notched towers (with twelve spaces in between) that were used to measure the place where the sun rises and sets on the horizon to determine the approximate date of the year.  I highly recommend going at sunset or sunrise so you can see the phenomenon yourself.  (Although I went at dawn, it was a cloudy day, so I didn't actually get to see it myself.)

The site was not well marked, and so I went by a tour, which I'd highly recommend.  I'm not sure I could have even found the exact site in the desert with a rental car, and there was no signage or explanations available at the time.  Moreover, the tour was with a local company and with a local archeologist (details in the logistics section below), so I felt good about supporting the local economy.

Logistics:  The site is just outside the town of Casma.  Casma is on the main bus lines on the west coast from Lima to Trujillo, so getting there by one of the big bus companies that caters to tourists should not be difficult.

I organized a tour of the site through a local company in Casma that I found through TripAdvisor, Akela Tours.  They arranged an archeologist to give a tour in Spanish.  (They also offered a translator, but I speak enough Spanish to get by.)  The tour was at sunrise so you could see the sun rising over the site.  The company was very helpful overall and I would highly recommend!

Because I was trying to pack in a whole lot in a short period, I actually arranged form Akela tours to pick me up from the Lima airport, stop in Caral Supe on the way (only about an hour detour off the highway), leave me in Casma to overnight, and then take the sunrise tour of Chankillo the next morning.  After the tour of Chankillo, I hopped in a collectivo to go over the mountains to Huaraz, where I visited Huascaran National Park. The alternates would have been (1) to do a daytrip to Caral Supe from Lima and then head to Casma on an overnight bus or (2) to take two days to get to Caral Supe and then Casma by public transport.

From "Chankillo Solar Observatory and ceremonial center" to “Chankillo Archaeoastronomical Complex” upon inscription (on the advice of ICOMOS).

Passage of the Sun: Chankillo is one of only two places in the ancient world known to have incorporated a complete solar horizon calendar, using its markers to track the progressive passage of the sun along the horizon throughout the entire solar year. And it is the only one where this was achieved on a monumental scale and where all the component elements of the instrument are still extant and functional. (Executive summary, p. 3)
Pillars: The Temple of the Pillars has pillared galleries. The pillars are found in rows of 4 to 16 and were decorated and contained slits forming a double-step motif. They supported a partial roof made from perishable local materials, such as cane, covered in mud. Archaeoastronomical analysis supports the suggestion that the pillars were designed for the projection of spectacular lights and shadows during the minutes following sunrise, orchestrated to cover the whole year. (Nomination Text, p. 41, 44, 51-52)

Destroyed during invasion: Chankillo and other structures of the Casma/Sechin culture were partially destroyed and their use abandoned in an apparent conflict about 100 BCE. (Wiki)

Desert Cultural Landscapes: The site exemplifies human interaction with a desert landscape and skyscape in a way that remarkably incorporates natural elements within the astronomical function, giving them a value similar to that of constructed elements. (Executive summary, p. 3-4)
Andes: The Cerro Mucho Malo is part of the coastal foothills of the western chain of the Andes mountain range. (Nomination Text, p. 15)
Linear inscriptions: The Thirteen Towers are a row of thirteen cuboidal constructions built of stone and mortar along a low ridge roughly at the center of Chankillo. (Nomination Text, p. 17) The regularly-spaced thirteen towers of Chankillo were constructed atop the ridge of a low hill running near north to south, forming a "toothed" horizon with narrow gaps at regular intervals. To the east and west investigators designated two possible observation points. (wiki)

Pre-Inca cultures: The culture that produced Chankillo is called the Casma/Sechin culture or the Sechin Complex. (wiki)
Qhapaq Nan (Inca): (...) the presence of a section of Qhapaq Ñan (the Inka road) between the Casma Valley and the coastline, possibly constructed during the time of Chankillo, which would give this road a temporal extension of more than 1600 years. (Executive summary, p. 13)
Formative stage: The dates obtained through dendrochronology and 14C analysis has defined Chankillo´s occupation between 250 and 200 B.C. (AB ev)

Geoglyphs: A group of geoglyphs is found 700 m southwest of the Fortified Temple, another is 2.2 km away. They were created by piling up small fragments of dark green andesite from nearby dikes over a light gray sand layer. This technique was used to create simple figures of triangles, circles, concentric circles, and rectangles. (Nomination Text, p. 48-49)
Stone Quarries: Archaeological research has documented in several parts of the property the quarries used for the provision of stone, the main construction material, the lithic workshops, both at the same quarries and in specialized spaces, the accumulations of shaped stones in the process of transfer between the quarries and the constructions, the tools used in the construction, and the areas for discarding materials leftover from the construction. All this evidence points to the originality of the construction materials used in Chankillo. (Nomation Text, p. 90-91)

Thor Heyerdahl: The towers had been known to travelers for centuries, the astronomical function of the towers was speculated famously by Thor Heyerdahl in his book Kon-Tiki of the 1940s (Wiki)
Female Archaeologists : Rosa Fung - Archaeologist Rosa Fung excavated in Chankillo during the 1960s, with the collaboration of architect-conservator Víctor Pimentel. (AB Ev)

Astronomy and Astrology: functioned as a calendrical instrument, using the sun to define dates throughout the seasonal year (AB ev)
Archaeological potential: The Fortified Temple was abandoned for over a millennium before it was reoccupied. Late Intermediate Period occupants (1100-1470 AD) left human burials, graffiti on the surviving walls, offerings, and some possible constructions of ephemeral use. This occupation is dated between 1051 and 1286 AD. It is likely that there is much more evidence of the occupation of the area at this time in sectors not investigated within the Chankillo Monumental Archaeological Zone. (Nomination Text, p. 77)

Name changes: From "Chankillo Solar Observatory and ceremonial center" to “Chankillo Archaeoastronomical Complex” upon inscription (on the advice of ICOMOS).
Cultural landscape not recognized: The Nomination File and the AB Ev from IUCN (May 2020) refer to the site as a cultural landscape.