L'amphitheatre de Durres is part of the Tentative list of Albania in order to qualify for inclusion in the World Heritage List.

The amphitheatre of Durrës is the biggest of the Balkan. It has the shape of an ellips and could hold up to 20,000 visitors. After the 4th century a Byzantine chapel with mosaics has been housed in one of the galleries. 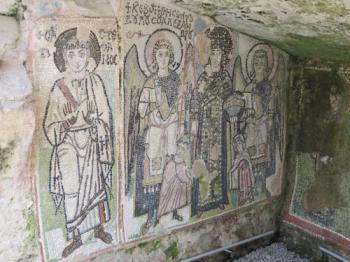 In preparation of my ‘Balkan Tour 2015’ I had looked into Albania’s TWHS for ones that would be interesting enough to add to my itinerary. The country currently has a T List of 4, but none of these sites look very promising except the easy extension of the Ohrid WHS into the Albanian side of the lake. The Ancienty City of Apollonia is the most recent addition to the T List, but it is yet another Greek-Roman site. So I had decided to skip them all. But unexpectedly I had half a day to spare on my last day in Albania, due to a late departure of my bus from Tirana to Struga in Macedonia. I used it to get to Durrës and visit the T listed Amphitheatre there.

Durrës is a port and Albania’s second city, only a 40 minute bus ride away from Tirana. Its amphitheatre lies in the city center, but isn’t as easy to find as many others of its kind. There are one or two signs, but mostly you’re up to yourself discovering the fairly sizeable structure between the houses. Coming from the bus station, there’s a flight of stairs that looks brand new which will take you to a view point above the amphitheatre. From there you can walk around it and get to the entrance. The site is fenced off nowadays, and there’s a small entrance fee of 300 Lek (2 EUR).

In Roman times this city was called Dyrrachium. It was an important place in Late Antiquity for its location on a road linking Rome to Constantinople. This amphitheatre, dating from the 2nd century AD, was only rediscovered in 1966 after centuries of oblivion. It still has been excavated only partly – the floor is covered by grass and there are houses on what must be the missing half of the ring. In February 2015, the municipality of Durrës seems to have decided to go forward in evicting the home owners from the site and demolish those houses.

Performances in the amphitheatre such as gladiator fights stopped in the 5th century. The location was then taken over by Christians who used it for religious events. They built two or three chapels into the innermost galleries, which first were decorated with mural paintings and later mosaics. The Byzantine style mosaics of the Main Chapel I found the most interesting part of a visit here. The one on the rear wall has suffered a lot from decay, but the two other panels (depicting Mary with angels, and the local martyr St. Stephen) are pretty intact. They are protected by a fence, probably rightly so because of the numbers of schoolchildren passing through this site.

Some 230 Roman amphitheatres have been found across the area of the Roman Empire. On the WH list we already have counted 19 of them. The Durrës Amphitheatre itself was rejected for WH status in 1991, for having importance in the cultural heritage of Albania but not meeting the criteria for inscription. Still the Albanians cling on to it, and it has featured on its T List since 1996. I can see why they do so: Durrës is an important city in Albania’s history. It was its first capital after independence, and still is the most important port and second city of the country. Maybe with a different angle, focusing more on the mosaics and the trade route aspects it will have a better chance than as an amphitheatre as such.

Of importance to Albania but does not meet WHS criteria