Rural Temples of Cusco is a group of ten churches whose architectural style and artistic components reflect a unique style resulting from the mixture of indigenous and European knowledge and techniques. These temples contain outstanding examples of paintings, murals and sculptures from the Cusco School of Art. The objective behind the construction of these churches was to impress and educate the indigenous populations in order to foster their evangelization. 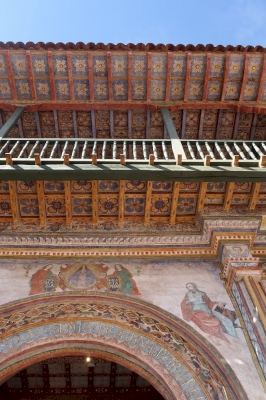 Looking for an easy way to travel from Cusco to Puno, I settled on a tourist bus that would make several stops along the way. Itineraries for all companies seem to be quite similar (Andahuaylillas, Inka ruin Raqchi, lunch, mountain pass La Raya). Only stop that I was initially interested in was Raqchi as it's part of the Qhapaq Nan sites.

When we rode into Andahuaylillas (the town) we found a rather sleepy rural town, scenically located below a mountain range. The church is in the city center and from the outside there is little to set itself apart from other churches. However, when we entered the church I was awed. All parts of the interior is richly decorated. The style is named Barroco Andino. It is not a poor reproduction of European ideals, but a unique blend of European ideas with Latin American culture, symbols and heritage. Calling it "Sistine Chapel of the Andes", though, is overstating the case. It's a lovely rural church for and by the local population.

I am always happy, if my "should be inscribed" post in the forum later materializes with the state party making a proposal. For Peru, I posted in 2017 that Barroco Andino had clear potential:

I have only seen the splendid church of Andahuaylillas and supposedly there are more sites like this. Stellar and unique with the local influences. Again, I would heavily favor inscription of these churches. The artistic level is superior to the similar Popocatepetl churches in Mexico.

In 2019, Peru added the Rural Temples of Cusco to their tentative list. I happily stand by comment from 2017 that this would be a great addition.

If you are travelling between Puno and Cusco by tourist bus, a stop at Andahuaylillas is included. It's probably the easiest way to visit.

You are in the heart of the Empire of the Inkas with plenty of epic sites to visit. The road between Puno and Cusco is dotted with Qhapaq Nan sites as it follows the historic road. In the direction of Puno is another Baroque tentative site, the Baroque Temple of Collao (T). Not sure how this relates to the rural temples of Cusco. Puno itself is the gateway to Lake Titicaca (T) and Bolivia. 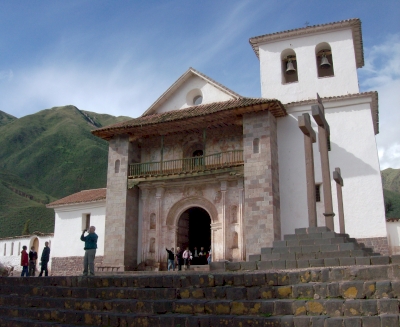