Les sites à fossiles néandertaliens de Wallonie is part of the Tentative list of Belgium in order to qualify for inclusion in the World Heritage List.

The Neanderthal fossil sites of Wallonia are 4 caves where significant archeological findings have been made that influenced scientific knowledge about the Neanderthal. They are the Caves of Schmerling, Scladina, Goyet and Spy. In 1829 at Cave Engis (now named Schmerling Cave) a fossil of the first Neanderthal ever found was discovered. 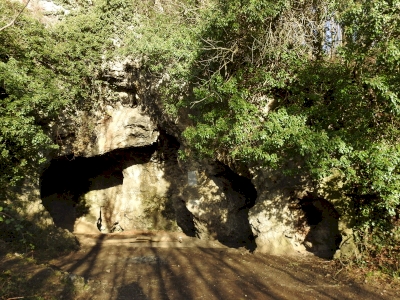 There are four fossil sites included in this TWHS: the Caves of Schmerling, Scladina, Goyet and Spy. They lie within a 50km circle around the city of Namur. Scladina can be visited with a guided tour on certain Sundays, Schmerling and Spy require a pilgrimage on foot and Goyet seems to be closed indefinitely. The Neanderthal remains and associated fossils of course have been whisked away to museums and universities long ago, but these sites are mostly about the Neanderthaler lifestyle and the development of Paleoanthropology as a science.

I choose Spy Cave for my visit. First I went to the museum about the findings in the nearby village. I was the only visitor, having easily secured a time-slot a day before by e-mail. The exhibition is in French but I received a folder with the texts in Dutch. You need those texts as the exhibition consists mostly of information panels. Spy Cave has brought us three Neanderthal specimen: a man, a woman and a small child. Their bones (discovered in 1886) were all mixed up and it took until 2010 to confirm there were three of them. The female had scars around her teeth which seems to indicate that she used toothpicks a lot! Unfortunately there are few findings on show – only some stone tools. Also there are copies of the bones of Spy I & II and an artist’s impression of how the Neanderthal man would have looked like. They must see a lot of school groups here. The most interesting part of the museum I found the 12 minute video at the end.

I then drove on for a few kilometers to the parking lot for the cave itself. The Grotte de Spy can be reached on foot via a side path of a fitness trail, it’s about 25 minutes walk in total. The trail is very muddy and the (signposted) path to the cave even more so. A number of hairpin turns take you down to the cave which lies just above the river Orneau. The path was so steep and slippery that I ended up taking a shortcut straight down the hill on my bum.

The cave itself is fully accessible and there seems to be no security in place. The only sign that betrays that this is not a normal cave is the memorial stone from 1928 that has been attached to its front. I entered the main ‘hall’ and two side rooms which seemed like perfect shelters. I learned from the museum that the Neanderthaler did not live in caves – they had camps, however most of those (except for 1 in Germany) did not withstand the test of time. Excavations at the site of Spy have brought forward animal bones (including those of mammoths) and stone tools in the same stratigraphic layer as the Neanderthal skeletons.

ICOMOS has carried out a thematic study on the somewhat broader subject of fossil hominid sites in 1997 and although evaluating no less than 31 sites, these Walloon ones are not among them. They were ranked on 6 criteria, including the number of the finds, the antiquity of those and the potential for further discoveries. The OUV of the Neanderthal fossil sites of Wallonia mostly lies in the role they played in the research of the history of the knowledge about the Neanderthal. Together with those in the German Neander Valley they convinced scientists in the late 19th century that these were the remains of a human ancestor. The first Neanderthal remains overall were discovered in 1829 by Philippe-Charles Schmerling in the Grottes d'Engis (now called the Caves of Schmerling, also part of this TWHS), but he thought it was an ancient skull of an anatomically modern human.

I do think that the Neanderthal history deserves a spot on the List, but there seems to be no singular site that really stands out. Of course we already have Gorham's Cave (wealth of  archaeological evidence), the Mount Carmel Caves (chronology of human evolution) and Le Moustier in the Vezere Valley (gave name to name a specific type of tools and artifacts, associated primarily with the Neanderthals in Europe, as Mousterian Industry). You’d need a number of sites to tell a coherent story; and with such a transnational serial site one or two of these Belgian locations could fit in together with for example Iraq's Shanidar Cave (full skeletons) and the Russian Denisova Cave (including a Neanderthal/Denisovan hybrid).

July 2018 - we spent the night just 200metres from the entrance of Grotte de Goyet on our trip to France. We did take a walk through the little town, and even came by the entrance to this cave. However, it was not on the tentative list last year, so I would rather call it a near miss, than counting it to the visited sites.

But maybe it should be an extensions to the flint mines in Mons? I don't know. Anyway, we can recoomedn the campground nextby, its very calm and green. 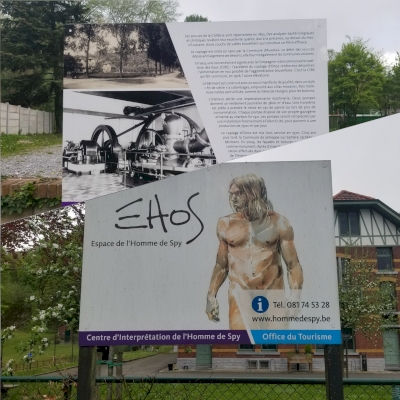 I've been to at least 4 human fossil sites around the world and that's only world heritage so there are probably a half dozen more and now I can add Wallonia to the list. I went to the small museum in Spy, assuming that the Spy Cave (cool name for either a Jason Stratham action flick or a Clive Cussler book.

I did not visit the cave itself because I believe it is off-limits and all items found inside have been moved already.

The museum has weird opening hours: Wednesday to Sunday only 13:00-17:00. They don't get many visitors. There is also not much English available with most in French and Dutch only. Hardly makes the 5 Euros worth it. Besides, as I mentioned before the addition of yet another human evolution site feels overkill, then a study to include only the main sites is needed because they just keep coming.