Sites of Globalization is part of the Tentative list of Portugal in order to qualify for inclusion in the World Heritage List.

The Sites of Globalization are a network of locations that represent the period of the first Portuguese overseas expeditions in the Atlantic in the 15th century. The property comprises six sites on the southern Portuguese coast, Madeira and the Azores. This first phase of globalization covers the period of the opening of trade routes between the south of Portugal and the west coast of Africa and the colonization of the Atlantic islands.

Map of Sites of Globalization 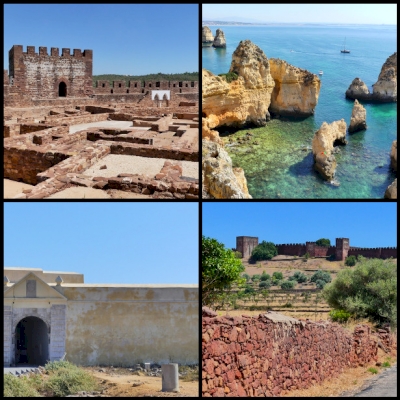 After having visited (unknowingly) 2 locations of this tentative WHS in Madeira (Funchal) and the Azores (Angra do Heroismo being already inscribed) in 2015, this time round in July 2020 I made an effort to visit the 3 locations in mainland Portugal, namely Sagres, Lagos and Silves.

While beach hopping in the Algarve, we made an extra effort to explore Sagres and Lagos. In the towns proper, very little traces of history remain, but if you head towards the “Land of the Prince”, several promontories such as Ponta da Piedade, Cape St. Vincent and Sagres Point offer not only pleasant viewpoints and geological formations but also fortifications such as Fortaleza de Sagres (and Fortaleza do Beliche). In ancient times this was viewed as finis terrae, the end of the known world.

The Sites of Globalisation are portrayed on the UNESCO website as “places of enormous cultural value, both tangible and symbolic, that bear witness of the genesis of ocean expansion and the Discoveries and of new interactions among worlds and civilisations. This network of places established a new maritime route that brought together landscapes, cultures and symbols, but also scientific, technological, economic and social progress. In this space in time and place, a series of technological, geo-strategic and artistic innovations were established, which left their mark on humanity, thereby making the discovery of the “New World” possible”. Already in this superlative description, one can easily notice that most of the OUV these sites might have is mostly symbolic and not very tangible.

In a way it draws on the Silk Route WHS nomination, but the tangible heritage of the Sites of Globalization pales in comparison. The Algarve was “a first quay” which was at the origin of the creation of a global world through the actions of Europe in the coming centuries. This was the phase of launching Europe into the process of globalization, which soon continued in the above mentioned locations on the islands of Madeira and the Azores.

Silves, perhaps, is the only exception of the 3 locations I visited this time round. It is a worthwhile stop when travelling from one beach to the next in Algarve. It is the former capital of the Kingdom of the Algarve and is a pretty walled town situated on a hill above the Arade River. The Silves Castle is located on the top of the hill and it is possible to visit and walk on parts of the Almohad town wall for a small fee. I paid for the ticket mostly because I was curious to see the oldest sugar mill in the Iberian peninsula dating from the 15th century, specifically mentioned on the UNESCO website. Well, it was a big let down and certainly not worth the ticket, but the Moorish remains inside the castle were certainly worth viewing. There are a number of free parking spaces close to the castle entrance and the Silves cathedral with the Manueline portico.

All in all, even though I enjoyed my visits, I don't think that this tentative WHS possesses any tangible OUV which would add value to the WH list. 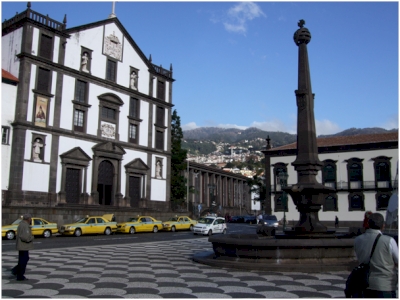 I visited Funchal couple of years ago. It is lively town located on slowly ascending southern coast of Madeira that is otherwise very rare in this rocky island. The town was founded in 15th century, and the historical district is still well preserved with most of the facades and pavements in typical black-and-white design. The cathedral from 15th century is quite nice but not special. Photo shows the main square with the municipal house and a fountain. What is also typical for Funchal is a massive cock-a-doodle-doo every morning as locals likely love roosters...

Though Funchal is pretty and I enjoyed my stay there, I cannot distinguish OUV of this nomination as Site of Globalization. Funchal is not outstanding. Travelling, migration, conquer, etc. belong to basic features of humankind. We could see it in many cases in the past, and we see it even now. This nomination reminds me some branches of modern art: the artefact is not visually very special, and you need to read a thick book that justify its uniqueness, which is rather abstract and cannot be recognized directly on site. 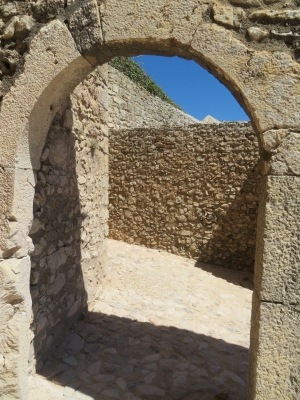 My time in the Algarve was centered around Lagos. Therefore, it was easy to explore some of the historic sites of the city that are connected with "Globalization". The city walls have an imposing gate that faces the harbor, yet the walls themselves are not well preserved and much of their authenticity has been lost. The expanding vacation city of Lagos, tourist infrastructure, and visitor services has certainly strained the historic heart of the city. Indeed, most people are not going to Lagos for its history, they are going to enjoy a slice of the Algavre coast.

As you approach the two capes West of Lagos (Sagres, St. Vincent), you are struck by the wildness of this coast. These windswept rocky outcrops tower over the sea and more than once I imagined this area as the boundary of the ancient world. It took many centuries before individuals like Henry the Navigator sailed West toward the unknown.

Sagres Fortress - Visited more for its location, rather than its historical importance, Sagres is interesting, but not a must-see site alone. The cape is dramatic, but as I said in my review of the Southwest Coast (Alentejo), there are more unique, beautiful locations of coastal geology.

Beliche Fortress - A small fortress (partially ruined), that you pass on your way to Cape St. Vincent. I found this site more interesting than Sagres, because of the rugged authenticity and the precarious location on a cliff. The views are stunning and a small scenic hike is accessed here.

Lastly, I want to mention Silves: a nearby component of this collection of historic sites called "Sites of Globalization". This historic city began on my itinerary, but I never made it there, a small disappointment. This component may offer more insight into the rich history of the Algavre region.