Southwest Coast is part of the Tentative list of Portugal in order to qualify for inclusion in the World Heritage List.

The Southwest Coast is the 150 kilometres long coastal stretch on the Atlantic Ocean between São Torpes in the north and Burgau in the east. It corresponds to the entire area of the Southwest Alentejo and Vicentine Coast Natural Park. The park has a diverse landscape with steep and rugged cliffs, beaches and small islands and is home to numerous endemic plants. Notable species of animals are the sea otter and the white stork, which nests in the cliffs by the sea. 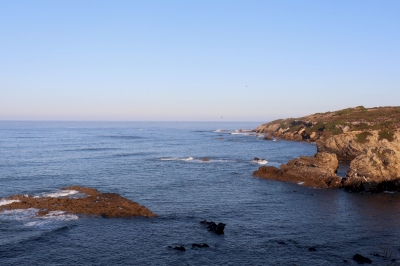 October 2020 - since all Portuguese mainland WHS sites are north and east of Lisbon, we decided not to travel along the Algarve and Southwestcoast. However, friends of us where in Portugal at the same time, so we visited them in Vila Nova de Milfontes. It is a cozy little surfer town. North of it you can find the Praia de Malhao with its beautiful cliffs, sand beach and coastal vegetation. I am positive that this must be one of the most beautiful spots of Portugal’s coast. We spent a whole day here with our friends and daughter, were swimming in the cold waves of the Atlantic, got sunburned and had good enough impressions that we could leave the coast the next day to continue to Evora and Elvas. 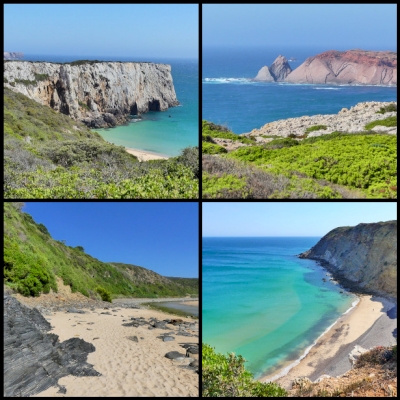 I haven't been to the US Pacific Coast Highway like Kyle Magnuson, but I have been to the Great Ocean Road in Australia and even though the drive per se is not comparable, the geological aspects and rugged coastline and formations certainly are. The pristine condition and the scale of (most of) this Atlantic coastline in Europe, mostly devoid of urban sprawls or eyesores is definitely unique in Europe. It represents about 362 million years of the Earth's history, showcasing the development stages of sedimentary basins with vast preserved fossil records, dinosaur trackways (at Salema beach) and associated magmatism corresponding to the Paleozoic, Mesozoic, and Cenozoic eras.

I recommend checking out some of the highlight hiking or cycling routes on https://rotavicentina.com/en/. So as to cover as much ground as possible over a number of days, we drove to several key points of interest and did some short hiking loops or stretches and/or beach hopping combined with panoramic viewpoints.

Of the many we visited, I'll describe with to us were highlights for different reasons. For a good mix of culture and nature, the best area for us was the stretch near Aljezur and its castle. The Circuito de Praia de Odeceixe hike from the windmill dotted countryside of Odeceixe at the regional border between Algarve and Alentejo, crossing the shallow banks of the Ribeira de Seixe (at low tide) from the beach to the opposite rugged geological formations caused by faulting, a consequence of the movement of the plates that form the Earth’s crust. The hike uphill to the flat promontory overlooking the S shaped river flowing into the Atlantic Ocean gives a bird's eye view over what is considered to be one of the 7 Wonders of Portugal. Moreover, it is quite a good spot for birdwatching too.

For a seemingly never-ending sequence of viewpoints of exposed geological formations, cliffs and beautiful sandy beaches providing amazing views and swimming opportunities, I recommend the area around Burgau. From the quaint village of Burgau, after some relaxing and swimming at the beach, I headedto the outskirts of the village following a prickly pear path close to what might look at first sight as an open air landfill or quarry. After quite a strenuous uphill hike, it becomes clear that in actual fact this is no landfill or quarry but eroded cliffs with exposed layers of sediments. You'll know you're hiking in the right direction if you spot the light blue and green marks of the Southwest Coast and Vicentina Route Natural Park. Most of the time, it will be extremely windy here so be careful not to go too close to the edge of the cliffs or venture too far on the loose rocky trails. I wouldn't opt for this hike in rainy weather.

At the westernmost point of this tentative WHS, opposite the stretch from the Cabo do Sao Vicente lighthouse to the Beliche Fortress, there's a really worthwhile hike among coastal and dune vegetation, garigue and red rock formations. The best stretch is close to the Beliche Fortress. After parking my car here, I gave my back to the Fortress, crossed the road and walked what at first seemed a narrow white sandy trail with low coastal vegetation in full bloom. After around 20 minutes of walking the trail widens in a patchwork of red sand and white sand trails for about 30 minutes with nothing in sight around you. Make sure to keep track of your trail to avoid getting lost in this extremely windy and hot area. Then all of a sudden the bicoloured sandy trails end abruptly and you reach a vast and very jagged stretch of garigue with almost no hiking trail marks. After slowly making my way to the cliff edge from rock to rock to avoid walking on the lush and diverse coastal flora, I reached an incredible viewpoint over red rocky cliffs and geological formations which I only managed to take in for a short period of time due to the incredible gusts of wind - no wonder there isn't a single tall tree around for kilometres on end!

Overall this is a noteworthy vast natural park off the beaten track in Portugal and would be a worthy addition to natural heritage site list in Europe, if only to halt the temptation to build more tourist accomodation along the coast - there is enough of that on the southern coastline of Portugal! 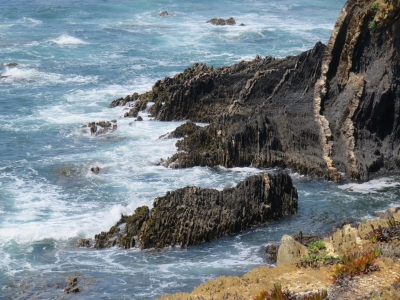 Utilizing a car rental (Fiat 500) my wife and I drove from Coimbra to Lagos. However, once we passed Lisbon and approached the Northern portion of the Southwest Alentejo and Costa Vicentina Park, we got off the toll road and took the highway that runs along the coast (though not ON the coast like the PCH in California). Our first stop was in Almograve, which did not disappoint. We've explored the California coast for a decade and fallen in love with its rugged beauty and I was so pleased to see this equally rugged and beautiful coast in Portugal! Its hard not to compare these coasts, but it should be noted they are still vastly different in regards to inland habitat, biodiversity, and geology. Where they do compare however is in the visitor experience, as you park your car and are rewarded with expansive coastal views, secluded coves, and interesting rock formations. My two stops along the Western coast (Almograve and Odeceixe) worked out very well and the detour off the toll road was more than justified. Before I move on to the sites in the southern portion of the park near Lagos, I should mention a special feature about Odeceixe which is situated on the Rio de Seixe (River Seixe), right on the border between the Algarve and the Alentejo. When rivers and oceans meet, they often form quite spectacular landscapes, Odeceixe is certainly no exception to this. Far more busy than Amograve, but very special nevertheless.

Having 3 nights in Lagos gave us plenty of time to explore the Cape of St. Vincent and Cape Sagres. The wind can be very intense here and the amount of visitors is also quite large in comparison to our visit to coastal sites in the Alentejo. These two factors did not ruin the experience, but it made exploring both capes slightly more challenging! I found the fortress in Sagres somewhat disappointing and I would not add much beyond what Nan described. On the way to the Cape of St. Vincent, I would add that the Fortaleza do Beliche is worth stopping, indeed this site provided the best view of the cape and this fortress feels more authentic in its ruined state. As most world heritage travelers researching this area will know (or discover), the sites near Lagos are also part of the "Sites of Globalization" tentative nomination. There is even a small museum about some of this history near the lighthouse at Cape St. Vincent. So while the sites near Lagos may be more tempting for the world heritage enthusiast, I would suggest considering renting a car and exploring additional sites along the Alentejo.

California is mentioned in the "Comparison with other similar properties" section and while in some ways comparable, the Southwest Alentejo and Costa Vicentina is still quite different. I would love to explore more of this park and I hope that its protections increase. In addition, more information panels should be installed, perhaps 1-2 visitor centers could be built, and there may be some work needed regarding private ownership within the park. Overall, this exploration of the Southwestern Coast was one of the highlights of my visit to Portugal. 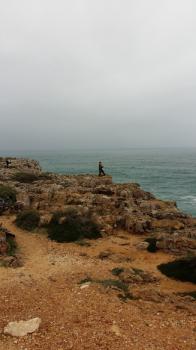 It's surprising that a tentative site like this bordering one of the most touristic regions of Europe, the Algarve, has no review. Then again, world heritage travelers may not be the typical customers for package holidays, timeshares and all inclusive offerings ...

The proposed area runs along the coast line from Sagres in the South up to Sines in the North. It's easiest to access at Sagres which can be reached by local bus from Lagos.

In Sagres the main site is the fort. While the buildings are of less interest, you get great views of the cliffs and a good feeling of the immense force of the Atlantic ocean. There are holes in the rock and you can hear the sea roaring beneath you. It's also a bit bewildering to see all the Portuguese fishermen standing at the edge of the cliffs, 50m above the sea, with their fishing rods and little to no safety measures taken. Apart from the fort the beach in Sagres is popular with surfers and that's it.

Difficult. I liked the site and enjoyed my visit, so I wouldn't mind. But I am not sure why these cliffs should be more special than those in Dover, Etretat or Rügen.

There are buses running from Lagos to Sagres. In summer they will continue to Cape St Vincent. From Lagos you can travel all along the Algarve. Long distance busses will even take you to Seville and Lisbon.