The Cultural Landscape of Civita di Bagnoregio is part of the Tentative list of Italy in order to qualify for inclusion in the World Heritage List.

The Cultural Landscape of Civita di Bagnoregio is an example of an ancient village founded in a precarious location, atop a high tuff peak on the border of the ancient Volsini volcano. Originally settled by the Etruscans or Villanovians over 2500 years ago, the village largely dates to the medieval period. Set in a fragile and unstable environment, there is clear evidence of the natural degradation of the cliff over the centuries and human attempts to halt it.

Map of The Cultural Landscape of Civita di Bagnoregio 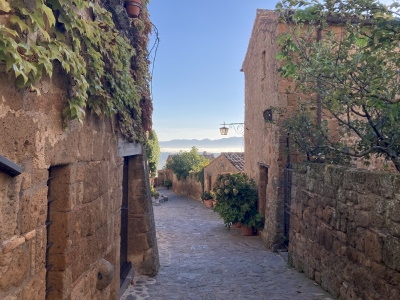 When my Art History friends decided to have our annual get-together in Rome, I immediately extended the trip with a day to include Civita di Bagnoregio. This was supposed to be Italy’s nomination candidate for 2022 (now postponed to 2023). I stayed overnight in the core zone, a spooky experience as the place gets deserted at night. I arrived at the footbridge only at 7.30 pm; most of the approach was barely lit and neither was the village as only 16 people permanently live there. No restaurants are open in the evenings (at least not in October) and the owners of my B&B had left me the key at a hiding place.

Still, the people at the ticketing kiosk collecting the 5 EUR entrance fee to the village were at their post in the evening. The introduction of this fee for the 1 million yearly tourists has been a blessing for both Civita’s and Bagnoregio’s inhabitants, as communal taxes have been abolished for them since.

I explored Civita the next morning - it takes half an hour at most. There is one main street, which you can follow further down a bit towards a cave. The cave was used for burials by the Etruscans, but after the large earthquake of 1695, it was turned into a Roman Catholic chapel. The views from the village towards the surrounding landscape are quite picturesque, but overall I found the town more suitable for a ‘’Most Beautiful villages” award than WH status. Storywise the most similar WHS would be Matera, which I found much more spectacular in both its setting and history.

The classic photos of Civita, almost floating in the landscape, can be taken from the Belvedere viewpoint, which lies in the neighbouring town of Bagnoregio about 500m from the bridge. The town of Lubriano also has a good viewpoint: from there you can photograph the village from the side. All closer points will have the modern bridge prominently in view, and, honestly, the bridge isn’t that pretty.

In Bagnoregio, the Cathedral and the stretch of road leading towards Civita (including the bridge) will also be part of the nomination. The Cathedral supposedly has good frescoes, but I found it closed both in the evening and in the morning when I walked by.

Getting to Civita di Bagnoregio on public transport is quite a hassle, and when it gets inscribed a connection to the Rome hotspot is doubtable. The total net time needed is 2 hours and 40 minutes (1.5h train, 35 mins bus, 35 mins walking), but it takes a lot more when trains get delayed and you have to wait for one of the few Cotral buses that make the trip to Bagnoregio daily. My train from Rome Tiburtina to Orvieto had a delay of over an hour and I had to wait for the last bus of the day that leaves at 6.35 pm. Also, be aware that buses may leave early or just when the clock turns to the scheduled departure time. Tickets (also for the return) can be bought at the BON Italy coffee bar at Orvieto Scalo’s train station. 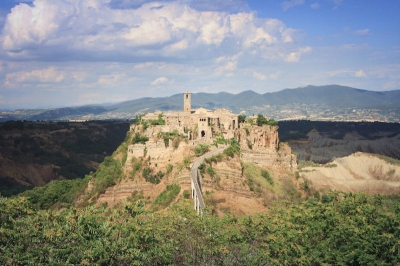 The Civita (old settlement core) of Bagnoregio is a small village built on top of a tuff peak that is slowly crumbling away, nicknaming it “the dying city”. The town can be reached on rural roads between Orvieto and Viterbo, You can access the Civita walking down and up from the new part of Bagnoregio. There is a car park close to the access and view point (best pictures from there) as well as restaurants and shops. Parking is more expensive than in the center, but the walk is too long from the next place you could park the car.

It feels a bit weird to me that you have to pay entrance to a village, where actual people (12 permanently) live, but I guess it helps to preserve the village.

The only bridge to access the Civita and the village itself are clearly not made for cars. But it’s Italy and of course they found a way to use vehicles anyway. There is are 2 or more tiny Red Cross cars driving on the bridge, being only able to pass by if pedestrians clutch themselves to the railing. Several motorbikes passed the bridge as well during our visit.

The village has no real highlights to offer, but is like a beautiful piece of art in total. We visited a tiny cave museum with Etruscan and Medieval remains for only 2 EUR per person. At the end of the village, there is a private garden that can be visited for a donation or the purchase of some local product. No question we went for the products. All the houses are made of tuff and most of them are restaurants or hotels. Apart from garden and caves, you can visit every corner of the village in about 20 minutes. I spent a lot of time taking pictures approaching and leaving the Civita.

Unfortunately, I can’t say much about the cultural landscape. There are no buildings around to spoil the view, so it underlines the general beauty of this place.There are some hiking path pointed out at the entrance point. If you have more time, try one of these. 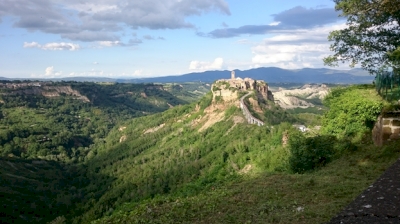 Updates September/2021: I am reading the nomination file and thinking intensively about the OUV justification. The town Bagnoregio, the hamlet Civita, and the surrounding Valle dei Calanchi (Badlands Valley) have been proposed as the core zone.

The text is rather confusing, the justification is full of flowery phrases not easily understandable for me. The new term "antifragility" as the main feature of Civita has been invented and proposed following the Italian tradition of artificial intellectual constructions (Bologna porticoes). It is argued that the place is permanently inhabited since Etruscan times, and now there are still around 10 residents. Without the human interventions Civita would be totally eroded as seen all around. I am wondering why the inhabitants are so stubborn, maybe the reason is a beauty of the place...

In the comparative analysis, places like Athos, Meteora, and other similar sites all over the world are mentioned. However, the highest frequency of the comparable places are in Italy: WHSs - Amalfi, Matera, Cinque Terre, Piedmont vineyards, Val d´Orcia, TWHSs - Volterra, Orvieto, and other sites - Pitigliano in Tuscia, or Aliano in Basilicata. I have to admit that Civita is kind of different when compared to above listed sites. The integrity and authenticity is indisputable. The Civita houses are built from the same tufa stones on which they stand, and there is no disturbing element. Even the concrete bridge from 1963, which is described in the justification in detail, is OK and can be taken as the important element of the site.

All in all, I changed my mind (my review from 2018 below). The quality of the Civita cultural landscape is understandable even without reading thick books or understanding the term ANTIFRAGILITY. When looking at the nominations for 2022, Civita is probably the best one of all European proposals - Thumb Up!

The site is accessible from the town of Bagnoregio in Lazio region and the first sight towards the Civita valley is breathtaking. Civita is accesible for pedestrians only via one bridge for a fee of few Euros. The town of Civita is quite small and it is still diminishing due to the collapsing of tufa rocks, and there is almost nothing special inside the town - a gate, little streets and a square with stone houses. We also try to enter the valley around Civita as we did a loop around the Civita landscape by car, but it is not easy to access it and even to view it from other sites than from Bagnoregio because of thick bushes and collapsed side-roads. It would require more time for detailed exploration of the landscape around the Civita than we had. We traveled from Orvieto to the Viterbo region and this was just a short stop.

I am afraid that similar eroded landscape can be seen also in other parts of Italy and Mediterranean, and Civita itself is small sister of more impresive Orvieto in Umbria or Pitigliano in Tuscany. Therefore, I am not sure if there is any OUV. Anyway, I would recommend enjoying the view from the terrace of Bagnoregio over the valley of Civita with glass of beer from the nearby bar...