Kyiv: Saint Sophia Cathedral with Related Monastic Buildings, St. Cyril's and St. Andrew's Churches, Kyiv-Pechersk Lavra is part of the Tentative list of Ukraine in order to qualify for inclusion in the World Heritage List. It is a proposed extension of Kyiv WHS.

St. Cyril's Church and St. Andrew's Church are two monuments in the historic centre of Kyiv representing architectural and artistic styles from the 12th to the 19th century. St. Cyril's Church was built in the 12th century and extensively reconstructed in the 18th century. It is mainly a combination of Byzantine and Baroque styles. St Andrew's Church from the mid-18th century is a masterpiece of Ukrainian Baroque with Classicist elements in the interior. 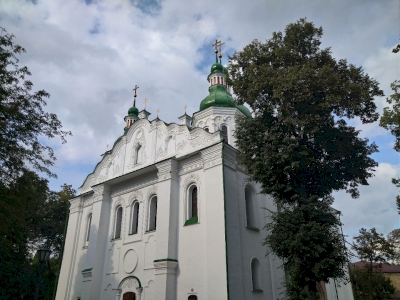 St. Andrew's Church is located only a few minutes walk from St. Sophia Cathedral, creating a sort of triangle with St. Sophia and St. Michael's, and well within the popular tourist area of Kyiv. So most likely any visitors to Kyiv have been to St. Andrew's, another neutral museum like St. Sophia.

On the other hand St. Cyril's Church is located somewhat out of the way and may even seem difficult to get to by public transportation, as there is no metro station nearby.  This means that you need to know how to take those mini bus, ubiquitous in Kyiv, unless you want to walk.

But Kyiv is rapidly changing.

First, while the city was in lockdown and the public transportation was in halt in 2020, they installed a system with metro card for the first time, with which you can now take metros and minibuses. To my amazement, most of those run-down minibuses are now equipped with the electrical card readers.

So all you need to do is, wherever you are in Kyiv, to check the Google Map Direction, and it shows you which metro and/or minibues to take to get where you want to go. Just scan your card with the card readers at the entrance of metro or on minibuses. One ride still typically costs 8 UAH or 0.30 USD.

As you get off minibuses at the Muzei Kyrylivska Tserkva (Museum Cyril Church) bus stop, you will see a large arrow pointing to the church. Yes, the church is also now a museum.

This church (photo) was built in 1140, some 130 years after St. Sophia, by the prince of Chernihiv. The importance of the church has to do with its origin in the time of Kyivan Rus. Like most of the historic churches in Kyiv this one also has the restored exterior in the Ukrainian Baroque style from 18th century, with what some call pear cupolas, instead of onion cupolas. So it is the interior where you see the Kyivan Rus remnants, including frescos. The most famous of these is supposed to be "Angel Rolling the Heaven into a Scroll," which an English-speaking caretaker here immediately pointed out to me as soon as I entered the church.

Although these 2 churches are not yet inscribed within the Kyiv WHS, they are already grouped together and promoted as "National Conservation Area: St. Sophia of Kyiv," which includes St. Sophia, St. Cyril's, St. Andrew's and the Golden Gate of Kyiv. 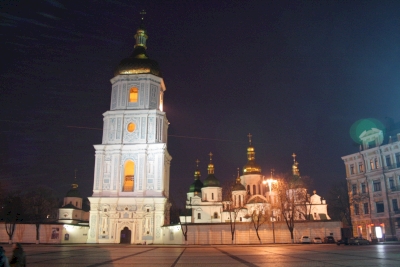 There are three most sacred places for Russian/Eastern European Orthodox Christians to visit: Sergiev-Possad Lavra, Mt. Athos an Kyiv-Pechersk Lavra, lavra being the highest in the hierarchy of the Orthodox monasteries. We visited this one on our road trip from Slovakia through Hungary and Romania to Ukraine, to see Chernobyl and some other sites in 2012 - the early stages of our WHS travels where we basically looked at what was around and visited that. We saw the lavra with my classmate from Oxford, Kirill, very religious person, so that added another layer to the whole experience.

From architectural side of things, it's like any other Orthodox chuches if you've already seen some. The thing that differentiates it is the complex of undergound caves dug by the monks which is now a final resting place for many of them. We had a Russian-language tour with local devout people. Women, wear a long skirt as per other Orthodox monasteries, but they provide wrap skirts if you don't have one. Then you receive a wax candle that will be your only source of light as for some religious reasons, the artificial light is not allowed inside. Warning, don't go if you're claustrofobic, because you're in for a ride. So we entered, a group of about thirty people and we were walking along these small corridors, candles in our hands. There was so much candle waving I was afraid my headscarf would catch on fire. The atmosphere is spooky, aided by the fact you're walking past coffins. Most of the mummified monks are covered with a hand or a foot uncovered here and there. The Orthodox folks with us were running around, trying to kiss each of the glass coffins, it was truly bizarre. There is lot of mysticism woven into the tour narration, how the prayers mummified the bodies, etc. It is an experience that will stay with you, I guess more so if you're religious, otherwise you will be just baffled.