The Marble Basin of Carrara

The Marble Basin of Carrara is part of the Tentative list of Italy in order to qualify for inclusion in the World Heritage List.

The Marble Basin of Carrara is the most productive basin of white marble in the world. The large scale exploitation of Carrara quarries began in the 1st century A.C. by the Romans. The area in the mineral natural park preserves excavations from the Roman age, the post-Medieval age and the pre-industrial era, including the the largest and most articulated Roman quarry of Italy, or even of the world, in the neighbourhood of Colonnata.

Map of The Marble Basin of Carrara 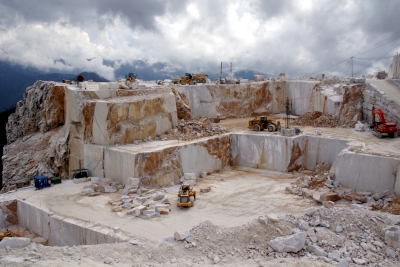 Where does all the snow on the mountains come from? You might think so when driving along the Autostrada A12 between Pisa and La Spezia in summer and looking up at the slopes of the Apuan Alps. Indeed, the quarries of Carrara look like a glacier from a distance. I visited the marble quarries in early November 2017 as a stopover on my Tuscany trip. It was a worthwhile detour to see where the raw material for Michelangelo's David came from, which I had previously visited at the Galleria dell'Accademia in Florence.
Marble is quarried in three valleys located above Carrara: Torano, Fantiscritti, and Colonnata. The quarries in the middle valley, Fantiscritti, are the most accessible. Leave the motorway at Carrara and follow the signposts for 'Cave di Marmo', drive through Carrara, then uphill through the small village of Miseglia. About two kilometres further on you have reached your destination: the Fantiscritti parking lot. There is also a bus connection from Carrara.

On the way to the quarries, you pass the Ponti di Vara. It is worth stopping here for the first close look at the quarries. The two bridges were part of the Ferrovia Marmifera, which was used to transport the marble blocks through the valley and to the port. Nowadays, the marble is transported by trucks and the former railway line is an asphalted road.
In Fantiscritti you can choose between two tour operators: Carrara Marble Tour (to an open-pit quarry) and Marmo Tours (an underground gallery). Or you can go on both tours, as I did. Both tours take about 45 to 60 minutes. First, we drove with a 4x4 up to the highest quarry, Canalgrande Alto (photo), at about 1000 metres above sea level. From up there you have a beautiful view of the basin and the quarries. The best time to visit is on a weekday when the work is in full swing. In Fantiscritti there are about 30 active quarries, in the three valleys together there are about one hundred.
On the tour it is explained which types of marble can be found and how the marble blocks are cut out of the mountain (with stone chain saws and steel cables with diamonds). The pure white marble ist the most precious. Today it takes two to three days to cut a large block of marble (10 m wide, 7 m high and 3 m deep) out of the mountain. In former times it was a work of months. The Cava Museo Fantiscritti displays historic tools and machinery outdoors and offers a good overview of marble quarrying from Roman times to the present day.
To get to the Galleria Ravaccione underground quarry, you drive into the mountain in minibuses. After a few hundred metres, the tunnel opens into a large hall where the marble is cut out in huge blocks. The high-quality deposit was discovered when a railway tunnel was built through the mountain. The explanations were more or less the same as on the first tour. Due to the unique location, it was still worth the visit.

The small town of Colonnata is also worth a visit. Not only because the Statuario, a pure white marble, is quarried there, but to taste a local speciality: the Lardo di Colonnata. The lardo has to mature for at least six months in brine with herbs in basins made of the local marble.

Marble exploitation in Carrara began in Roman times, but became famous through the Rennaisance sculptors. The large marble blocks, however, only make up a small part of the total quarrying. Nowadays, the marble is primarily used for stone slabs or stairs. And Carrara is an important site for the producing of calcium carbonate, which is used for toothpaste and cosmetics, but also in food industry.
Carrara marble is in high demand, today more than ever before. But this also brings problems. Modern and efficient exploitation methods are creating conflicts between economy and nature conservation.

Should the Carrara Marble Basin be a World Heritage Site? Given the historical significance, a clear Yes. However, this is a hypothetical question. The quarries are active and the marble business is highly profitable. The owners certainly don't want to be restricted by Unesco requirements. It is therefore very unlikely that Carrara will be nominated in the near future. And the marble deposits are almost inexhaustible. According to our tour guide, there is marble in Carrara for at least the next thousand years.

I live in a town near Carrara and I visited the marble basins several times. There are exceptional landscapes that inspired artists of all centuries and miles and miles of 'white' mountains. Plus, the basins have a storical meaning due to the thousands of statue made of Carrara marble. The 'Michelangelo Basin' and the 'Fantiscritti Bridges' worth for sure a place in the World Heritage List

The Marble Basin of Carrara (T)