Route of the Peace and National Identity

Route of the Peace and National Identity is part of the Tentative list of Guatemala in order to qualify for inclusion in the World Heritage List.

The Route of the Peace and National Identity comprises four churches from the Spanish colonial period. They preserve images and other artistic elements that constitute the symbols of present day Guatemala. These include “The Black Christ of Esquipulas”, a wooden image of Christ now housed in the Cathedral Basilica of Esquipulas, with which the Spanish missionaries wished to convert the natives.

Map of Route of the Peace and National Identity 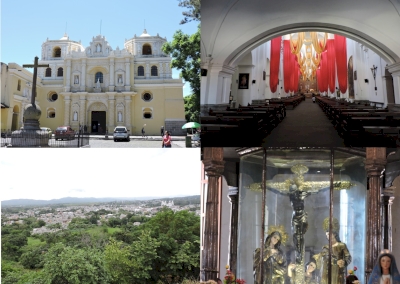 As part of a 3-week-whirlwind through Central America in July 2016, we visited two of the components of this church-related tentative site in Guatemala - the Nuestra Señora de la Merced in Antigua and the Basilica of Esquipulas. Both are named in the very sparse T-List description which says the churches are symbols of Guatemala but doesn’t offer much else.

Antigua is of course already inscribed. In July, with the temperature in the mid-20s, it is seemingly a slower tourist season so the baroque La Merced church only had a couple of locals inside. The interior, which was free to enter, was unremarkable apart from the ubiquitous hanging fabrics / curtains which were a fairly common feature of our trip (top right). Plain white walls accompanied an ornate chancel. The exterior held more interest with its intricate plaster motifs (top left). Adjacent to the church is the Parque de la Merced - fond memories of sitting in the shade beside the church watching the world go by. A quarter of an hour would suffice many, although I believe like many churches in the region it closes for a period of time in the middle of the day.

The baroque Basilica of Esquipulas (with four bell towers) literally towers over the fairly remote surrounding town and landscape - as one of the largest cathedrals in Central America it’s white facade and size certainly make it stand out (bottom left). Although it was fairly quiet when we were there, millions of pilgrims visit annually to venerate the Black Christ of Esquipulas, which is the central focus of the interior (bottom right). This was a 30 minute passing stop off on our way back to El Salvador from Copan Ruinas in Honduras with a driver / tour guide - our sequence of movements certainly confused the border guards in Guatemala!

The connection between the churches both in the T-List description and in person was not discernible (to me at any rate). While we enjoyed our visit, it would also be very difficult to argue that the components visited demonstrated OUV over and above what is already inscribed in the Americas.

Unesco Website: Route of the Peace and National Identity