Troodos, Mt.Olympus is part of the Tentative list of Cyprus in order to qualify for inclusion in the World Heritage List.

Mt. Olympus is part of the Troodos ophiolite, a 90 million year old fragment of extremely well-preserved oceanic crust. Olympus at 1,952 metres, is the highest point in Cyprus and was the epicentre of the uplift of the crust. 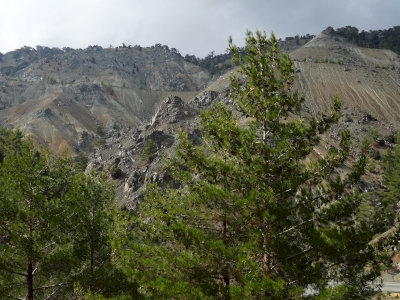 After a week down by the coast the winding roads up into the Troodos Mountains were a blessed relief. Gone was the fungal spread of ‘Villa-Land’, little boxes all made out of ticky-tacky. Instead characterful villages of weathered homes with red-tiled roofs leapt down the slopes as the road switch-backed. Clouds huddled above the peaks like sheep round a trough. The temperature dropped noticeably as we climbed and the air was scented with the aroma of pine resin. And then, one after another, the signs appeared, all with an unmistakable logo. My wife glanced at me suspiciously. “Considering you told me that we weren’t going to visit a World Heritage Site there certainly seem to be a lot of Unesco signs around.” One day I’ll have to tell her about the Tentative List…

It is now 21 years since Cyprus gained a new WHS.  And it’s hard to see an obvious contender for World Heritage status from their existing Tentative List. Cyprus’s T List is a bit of mess, to be honest. It’s existing three World Heritage Sites are strong (particularly Paphos and the Painted Churches of the Troodos Region in my view). Of the 11 locations listed one is an extension to an existing site (Painted Churches in the Troodos Region) and of the others six have a Description on the Unesco website stating “NB – This site has to be considered as part of the Troodos ophiolite, a 90 million year old fragment of extremely well-preserved oceanic crust.” In other words, six of the tentative sites should really be condensed into a single serial site. But they have been languishing on the list, separate, since they were added in 2002. There is a bleak irony in that there probably are several locations on the island of Cyprus that would have been a shoo-in for World Heritage status had they been nominated in 2002. Ancient Salamis springs to mind, and possibly Kyrenia. But they are situated in the occupied north of the island, outwith the Cypriot government’s control. And should the island see reunification a good nomination file would be needed to make them stand out from the crowd of similar existing sites.

The wider series of ‘Troodos ophiolite’ sites might be Cyprus’s best bet at getting one of their T-List sites inscribed. Success would clearly hinge on the usage of the word ‘ophiolite’. What is an ophiolite? It is, vide Wikipedia, “a section of the Earth’s oceanic crust and the underlying upper mantle that has been uplifted and exposed above sea level…”  At least a couple of ophiolite locations have already found their way onto the List – Gros Morne in Canada and Australia’s Macquarie Island. So Cyprus would have to differentiate somehow. Unlike the two aforementioned locations, the Troodos ophiolite is not untouched. Copper, mined here, was named after Cyprus. And the ‘heart’ of the site, such as it is, is a former asbestos quarry (photo - this mine was once a very big thing – a photograph of it even appears in our 1947 Romantic Cyprus guidebook!). As to whether this is enough to seal a place on the List, I’ll leave that to the geologists.

But there has certainly been some money spent to make the site accessible and relevant, surely a prerequisite for any move towards nomination. Those Unesco signs my wife spotted? Nothing to do with World Heritage, actually. They relate to the Troodos being a Unesco Global Geopark. A Troodos Geopark Visitor Centre has opened up in Pano Amiantos to try to explain the importance of the location. It is open every day except Mondays and entry is €3 for adults, €2 for children.  And 50 ‘Geosites’ have been mapped and accompanied by those aforementioned Unesco notice boards, thereby allowing the interested visitor to locate such geological wonders as pillow lavas, sheeted dykes and layered gabbro. Which, to the less-interested visitor, just look an awful lot like rocks.

So, likelihood of nomination? Probably low considering the unkempt state of Cyprus’s T-List – but I’m struggling to find a better candidate from those already on there. Chance of inscription if nominated? Well, who knows these days? I’m sure a convincing argument could be put forward. Some of the development may be of concern – for instance, it isn’t even possible to reach the top of Mount Olympus because it is occupied by a British radar station. And is it of interest to the casual visitor? Barely, if I’m honest. Despite everything I still find the geology rather impenetrable – and that’s my issue because, as I say, the Troodos Development Company has tried to make it as accessible as possible. But a pootle up into the Troodos is never a bad idea, particularly during Cyprus’s summer. You’ll need your own transport to make it up this far, but the roads up from Larnaca, though winding, are pretty good. And you’ll probably be passing through to find the Painted Churches anyway, so you may as well make a quick stop at the Geopark Visitor Centre (and the neighbouring Botanical Gardens which genuinely do make a rather lovely place to stretch your legs).