Bet She'an is part of the Tentative list of Israel in order to qualify for inclusion in the World Heritage List.

Bet She'an is an archaeological site south of the Sea of Galilee. The first settlement on Tell el-Hisn (castle hill) dates from the Late Neolithic (5th century BCE). In the Hellenistic period, Bet She'an was refounded under the Ancient Greek name Scythopolis. In 63 BCE, the area became the Roman province of Judea, the city was rebuilt and the city centre moved from the summit of the hill to its slopes. The remains of the ancient city date from the Roman period (theatre, amphitheatre, colonnaded streets, bathhouses) and Byzantine period (mosaics). 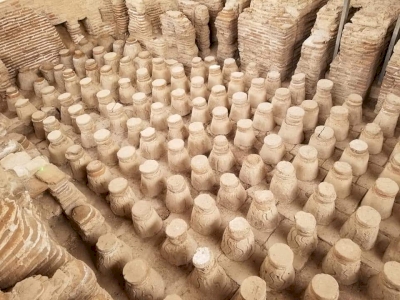 Israel is bulging with Roman ruins. You can find them everywhere, whether you're in the heart of Jerusalem, in the deserts by the Dead Sea or Makhtesh Ramon, by the Mediterranean coast, or even in the far north of the Golan Heights. By far the most impressive, based on what's left of them, is Bet Shean. The site, which I visited in April 2018, is about an hour's drive south of Tiberias, passing by Deganya and Belvoir Fortress, but I didn't take those detours. With a packed itinerary for the day, I went straight to Bet Shean first thing in the morning. From the entrance, there's a great view of the city in its full glory, backed by the towering tel behind. I got to tour the theatre (grand and relatively well-preserved, though with a wooden stage and no back wall), the cardo (where rocks show the age of the structure, the black basalt pavements preceding the white marble columns lining both sides), and the bathhouse (with archaic heating technology intact, the little stubs hold up the then-floor while water was heated underneath).

It's an impressive ancient site especially considering that the restored area is only about a tenth the size of the Roman city. I was particularly impressed by the sophistication of the bathhouse. Bet Shean was also the only time I got to step on authentic Roman floor mosaics, though better preserved ones or more intricate ones can be found in Bet Alfa next door, nearby Zippori, and across the border in Jordan. Now, while this is all impressive, we have to realize that Bet Shean's chances on getting WHS status based on it simply being an impressive, even outstanding, Roman city ruin is next to nothing, especially when neighboring Jerash, a more impressive Decapolis city, isn't on the list yet either. I think the key to inscription is the show of history here. Though I didn't have time to explore the tel, Bet Shean's uniqueness, in my eyes, lies in its historic continuity as an Egyptian-Canaanite-Roman city and how each civilization has left a lasting mark on it today. This, together with its impressiveness of preservation and grandiosity as a Roman city, might just make the cut. Personally, it isn't hard to see the OUV of such a magnificent site as this, even if it was overshadowed a bit by my visit to Jerash a few days later. 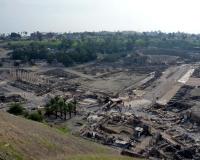 Our visit to Israel/Palestine uncovered many places of interest of which we had not previously been aware but the remains of the city of Beit She’an was perhaps the most impressive. We have been to most of the numerous inscribed excavated “Roman cities” but this was a “cut above” most of them. Furthermore, beyond its “Roman credentials” it also has a “Biblical” (and pre-Biblical) Tell and Egyptian remains from the time of Thutmose II (1500 BCE) when it became an admin centre for the Empire for around 300 years. It also survived beyond the Roman period as a successful Byzantine and largely Christian town through to the Arab conquests and an earthquake in 749 CE.

It was a very pleasant place to wander around and, in our experience, free from the “Holy Land Hordes” who make visiting places closer to Jerusalem quite a hassle. The site is spread out and we gave it a bit over 2 hours during which we felt we covered it reasonably thoroughly. It contains the usual Roman structures – Theatre, Baths, Agora, Temple, Nymphaeum and several paved streets. There are some nice mosaics – the most iconic of which, a Byzantine representation of the Roman goddess Tyche who traditionally was “Guardian” of the city, was stolen from the site in June 1989 so that only a replacement copy is on view. At the far end is the Tell. At the top there are a few excavated remains whose nature isn’t really very clear and some (copies?) of Egyptian carvings. There are definitely originals in the Rockefeller Museum Jerusalem. As an aside I make a recommendation here for people to visit that museum and not just the main “Israel Museum” (of which it is now organised as a sub-unit). Israel seems to regard it somewhat ambivalently as the “Museum of East Jerusalem”/”the Mandate” etc but it is a fine museum building from the 1930s and still contains some fine exhibits from Israeli inscribed and T List sites as well as those of Palestine (even though some, of which the most famous were the Dead Sea Scrolls, have been removed). The fact that visitors are advised to wear warm clothing in winter as there is no central heating gives an indication of the sort of grudging support which Israel gives it – you will have its wonderful halls almost to yourselves and FREE ENTRY! However, the main reason to climb Beit She’an’s Tell is for the very fine view over the entire site to be obtained from there (photo).

I visited this site in December of 2006. it was awe-inspiring. you walk from the visitors centre, and suddenly, unexpectedly, this massive roman city opens up before you; with a huge tel (hill made of archaeological remains) in the background. It is the biggest roman city in the middle east, and the part that you can see, and walk around, is only the downtown. 2000 years ago, the city sprawled over where the modern city is today. i was told a story; about a person renovating his garage, and finding a roman mural under the floor.

this is a magnificent site, a beautifully day/ or half day, trip from tiberias. this is in my opionion; worthy of inscription in the world heritage list.

Bet Shean used to be the most important city in the Decapolis - an alliance of 6 Roman cities in the Levant. It was additionally the largest Roman city in the Levant. The city is only partially explored, but what has been revealed is quite impressive with mosaics, a theatre, an amphitheatre, an indoor market, a bathhouse and the like. Next to the city centre is a classical tell with multiple earlier layers. Atop it you can enjoy a great view of the site and also explore the remains of an Old Egyptian residence. The site is of definitely of international standards and favourably compared to many similar Roman sites. Nonetheless, the chances of another Roman city being added to the list are justifably slim.