The Ribeira Sacra, Lugo and Orense is part of the Tentative list of Spain in order to qualify for inclusion in the World Heritage List. 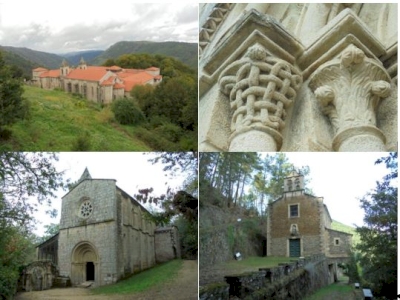 Site visited in September, 2020. I am very much in favour of inscription of this area. Landscape is pretty spectacular, while monastic monuments are well maintained and preserved even while they mostly do not serve its initial function.

Travelled from Las Medulas towards Ribeira Sacra I passed through amazing Mirador de Pontenovo (mouth of river Navea into Bibei, close to Central Hidraulica de Pontenovo). Although it is outside the designated area it is the perfect example of what you can expect in Ribeira Sacra – deep canyons, rocky mountains and rivers. From there I passed through mountainous area towards Parada de Sil.

I stayed overnight in Casa Pepe – upper level budget accommodation, there are also a few other hotels as well as restaurants in the village together with some shops and tourist information (main municipality building, maps and hints of the area available). It may be a good starting point to begin exploration of eastern part of Ribeira Sacra.

From Parada de Sil there is a direct asphalted road to Balcon de Madrid (not far from the village). One of the best picturesque places in the whole Ribeira Sacra. Local legend says that its name was taken from women that were watching for their husbands who were travelling to Madrid. Obviously it is just a legend as the main view from Balcon de Madrid is to the north (while Madrid lies to the south) and is located too far to be visible. While in the area do not miss a wolf (fox) trap (Foxo de cabrita de Parada de Sil, 42°23'22.3"N 7°33'54.1"W)

Monastery of Santa Cristina de Ribas de Sil is located around 5 km from Parada de Sil (asphalted road or hiking path). Romanesque church from IX- XII centuries that was recently carefully restored. Small entrance fee (1 Euro) goes to the local community. On the way to the monastery there are several view points (miradores) of Sil Canyon.

Monastery of Santo Estevo de Ribas de Sil located further west (some 18 km from Parada de Sil) is the biggest in the area. Its origin goes back to VI century but most of the buildings were transformed in XVI century in the Renaissance style (cloisters). Also carefully restored now houses a big hotel (Parador) but church and cloisters may be visited free of charge.

San Estevo of Atan church is located further north-west on the bank of Mino river (Igrexa de Santo Estevo de Atán, 42°30'01.8"N 7°42'11.4"W). Church belonged to the ancient monastery from the VIII century (not preserved). Current church was built in Romanesque style in XII – XIII centuries except of the tower that fell down in XX century. In fact, even if it was rebuilt with original stones it looks a bit different. Currently the church is surrounded by a modern cemetery and wineries (Ribeira Sacra is famous for its wine production).

The last of the nominated churches from Ribeira Sacra area is located in Chouzan village (to be specific it is close to the village, Igrexa de Santo Estevo de Chouzán, 42°31'04.8"N 7°43'27.0"W). Initially built in Romanesque style in XII century it was moved into current location in 1953 due to construction of the reservoir in Peares. The church looks as occasionally used. From the church ground there is a small path to the village (some 0,5 km, Chouzán) – traditional stone houses and slate roofing.

One day may be good for just brief viewing of some designated places but Ribeira Sacra requires a bit more time if you want to explore the area carefully. There are plenty of hiking paths, other monuments, picturesque traditional villages and the most important, landscapes of exceptional beauty. 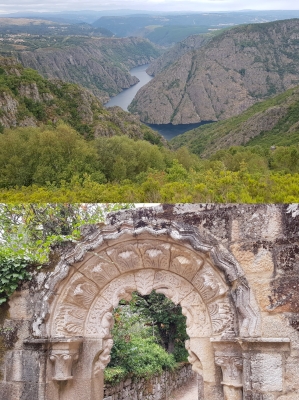