Rani-ki-Vav was built in the 11th century as a memorial by the widow of Bhimdev I, ruler of the Solanki dynasty. The vav was later flooded by the nearby Saraswati river and silted over until the late 1980s when it was excavated by the Archeological Survey of India. The steps begin at ground level, leading down through the cool air through several pillared pavilions to reach the deep well below. There are more than 800 elaborate sculptures in seven galleries. Many of these are in devotion to Vishnu. 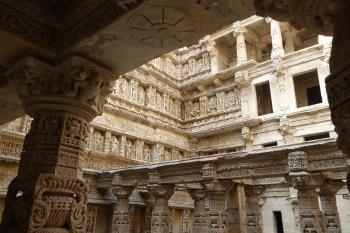