Djemila is a mountain village in Algeria, near the northern coast east of Algiers, where some of the best preserved Roman ruins in North Africa are found.

It was recognized because of its unique adaptation of Roman architecture to a mountain environment. Buildings present in Djemila include a theatre, two fora, temples, basilicas, arches, streets, and houses. 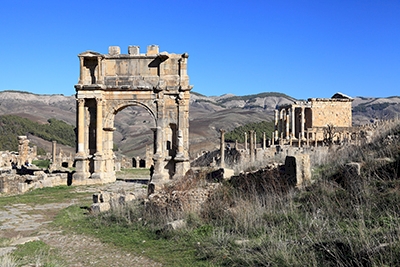 Site visited December 2013. The Arabic name of the ancient Roman city of Cuicul is Djémila which means ”beautiful”. The site really matches its newer name because it is probably the most beautiful and scenic of all the Roman sites in Algeria. I think it is also one of the top three Roman sites of Africa.

Cuicul was an ancient Roman colony and a military garrison founded in the 1st century. It is built on an altitude of 900 metres on a narrow triangular plateau. The city is well adapted to the mountainous location at the confluence of two rivers. During the 3rd century the city expanded beyond its original location. A New (Severan) Forum was built to the southern end of the city, and a theatre was built outside the city walls because there was not enough space inside the walls. In the 4th century the city grew even further with so called Christian quarters.

After the entrance gate, which is the highest point of the site, are the Christian quarters with a circular Baptistery building and the Great Baths. On top of the hill opens a view over the ancient city with some nice mountain landscapes on the background. In the centre of Djémila is the Severan Forum with Temple of Severan Family and the Triumphal Arch of Caracalla. To the east from the Severan Forum, hidden behind a hill, is a steep theatre for 3000 spectators. To the north from the Severan Forum the colonnade street of Cardo Maximus leads downhill towards the Old Forum. Around the Old Forum are some notable buildings: Temple of Venus Genetrix, Capitol and Cosinius Market.

Visiting Djémila was an enjoyable experience both because of the great ruins and also because of a beautiful setting. The first thing I noticed was mountainous setting which makes Djémila more interesting than the flat landscape of Timgad. Djémila is not too long distance from Constantine which makes it very enjoyable and easy day trip. While Timgad was almost empty of visitors there were lots of local tourists and school groups in Djémila which created more lively atmosphere.

For me the highlight of Djémila is first and foremost the ensemble of Severan Forum with the Triumphal Arch of Caracalla and the Temple of Severan Family. The other memorable things were the colonnade streets with mountain landscapes on the background, the skillfully carved altar on the Old Forum, and countless Roman inscriptions on memorial stones and tablets which were really fascinating. Some of the inscriptions looked so fresh like they were written recently.

After the ruins I visited the Museum of Djémila which is located next to entrance and parking place. And it was open, on contrary of the case in Timgad. It is small but it contains some great Roman mosaics and statues. The museum is a bit shabby but certainly worth a visit.

How to Get There

Visiting Djemila as a day trip by public transport should be quite easy and straightforward. You have to take a bus or shared taxi to Setif (50 kilometres from Djémila) or El Eulma (20 kilometres) and hire a taxi from there. Remember that a basic skills of French are essential for example when negotiating with drivers.

Setif is a one of the major cities of eastern Algeria with the population of 300 000. It is a typical colonial French city with some nice buildings from that era. It is a site of an ancient Roman city of Setifis. Some remains of the Roman city of Setifis (a tentative site) can be seen on the very centre of Setif.

Constantine is the capital of eastern Algeria and the third largest city of the country. During Roman times it was called Cirta. If you visit Djémila you probably use Constantine as your base for a day trip. But if you do not, Constantine is still a must visit on this area. In this City of Bridges are one of the most breathtaking sceneries of any city of this size. Near Constantine are two interesting tentative sites: Roman site of Tiddis and the Tomb of Massinissa. 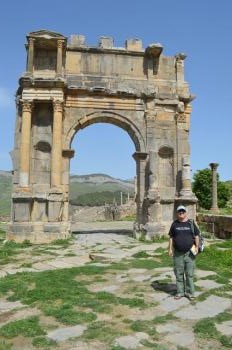 Setif is a good headquarter from where to explore the Roman ruins of Djemila, the antique

Roman settlement of Cuicul. Select a trustworthy driver and start, half a day is enough for the 35km distance. For the very first time I had to register with the local police at the entrance gate, I found it a little exagerated, but locals always say that it's for security reasons. Djemila in spring time is unbelievable beautiful. It is the symbiosis of the flowers with the ruins that was so unique. I was told that April/May is the best season to come here. But I can also feel the Sahara dust in the air. Besides of the Basilica, the Arc and various Temples, there are Baths and a very interesting museum with famous mosaic tiles like the Toilet of Venus. Its by far the best museum I have seen in Algeria. On the way back to Setif the police insists of an car escort out of Djemila, a bit exagerated I guess as there were really no security concerns.

This is one of the finest roman cities that you can visit. The forum, Severan temple, arch and theatre are impressive. The setting is is in the hills with a triangular city layout. The mosaics in the museum are also among the best you will see.

Theatres: Roman theatre
Mosaic art
Triumphal Arches: Arch of Caracalla
Baths: Vestiges of monuments that have marked the expansion of the city to the south are also included. They comprise private dwellings and public buildings such as the Arch of Caracalla, a theatre, baths, basilicas and other cult buildings. (AB ev)

Ancient Roman colonies: The city was initially populated by a colony of Roman soldiers from Italy, and eventually grew to become a large trading market. (wiki)

Early Christianity: In the southern quarter, Christianity was implanted at an early date (the bishop Pudentianus of Cuicul is noted from 255). (AB Ev) The site has also been marked by Christianity in the form of several cult buildings: a cathedral, a church and its baptistry are considered among the biggest of the Paleochristian period. (unesco website)

Built in the 2nd century: "Djémila is an outstanding example of ... (an) architectural ensemble illustrating a significant stage in Roman history of North Africa, from the 2nd to the 6th centuries". (It)is an " ancient Roman colony founded during the reign of Nerva (96 - 98 A.D.)".Around the beginning of the 3rd century, it expanded beyond its ramparts with the creation of the Septimius Severus Temple, the Arch of Caracalla, the market and the civil basilica." (AB)

Works by Nobel Prize winning authors: "Le Vent a Djemila" (1938)- essay by Albert Camus from the collection "Noces". Camus muses on death - inspired by the ruins!.
In the Louvre: Door lintel