Early Medieval Monastic Sites is part of the Tentative list of Ireland in order to qualify for inclusion in the World Heritage List.

The Early Medieval Monastic Sites date from the 6th and 7th century. The 6 sites served as centres of Celtic learning, teaching and enlightenment. They mixed elements of the indigenous, pagan heritage with Western European Christianity.

From the proposed sites I have only visited Glendalough (May 2017). As Nan has already pointed out, it is a fairly easy day-trip from Dublin, although we chose to stay at the only hotel next to the ruins. This proved to be a good choice as you can enjoy the site early in the morning or in the late after noon. The monastery was probably big for its time, but visiting it today will not take you longer than an hour. There is a modern visitor centre worth visiting and there is the obligatory hike from the monastery to the upper lake, where ruins from the same age can be viewed. These belonged to the monastery and served monks seeking solitude in the woods. The natural setting is very pretty. The site, including the hike, are very popular and although we did not visit it during high season there were a lot of visitors around, including many school groups. 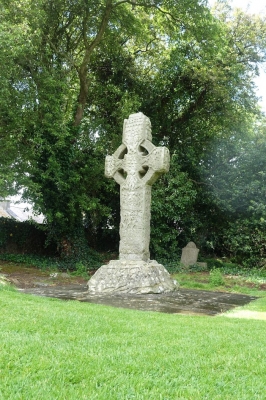 As a tourist travelling Ireland you will see plenty of monasteries across the Ireland. Most are worn down and in ruins nowadays. And while it is easy to blame the constant rain as culprit, the ruins are a testament to the long history of Christianity in Ireland. Never part of the Roman empire, Christianity spread there already in the 5th century.

Of the proposed sites I have visited quite a few along a road trip in Ireland:

Kells: The Kells High Crosses are probably one of the most iconic images of Ireland. Combined with the Book of Kells, on display at Trinity College, they are a key part of Irish cultural identity. There is also an original nunnery remaining near the church. The keys are with a neighbor, but I couldn't find the right door bell and it was raining cats and dogs, so I rather quickly gave up.

Glendalough: Located in a beautiful valley on a lake, this site has a different feeling due its church tower still rising high. Very pretty. And very popular with day tourists from Dublin.

Clonmacnoise: The best. See my review as the site is also listed as a separate tentative site.

As pointed out in my Clonmacnoise review I have little doubt that Irish monasteries belong on the list. To me the question is just between inscribing the best (from what I have seen Clonmacnoise) or a serial nomination of several monasteries (Early Monastic Sites). Interestingly, this nomination also happens to include Clonmacnoise, so the Irish would inscribe their jewel in any case.

Unfortunately, neither nomination is progressing much. I am not sure why.

Getting to Kells is fairly straightforward. You can take direct buses from Dublin. Glendalough is fairly touristy and there seem to be daily buses. But it's probably best served by car. For Clonmacnoise, again see my review.

Kells is fairly close to Newgrange and a different monastic site, Monasterboice. Along the road to Kells you will pass another tentative site, Tara, a location in the Royal Sites of Ireland.

Glendalough is embedded in a valley between hills. If you drive up the hills you will get to the Wicklow Gap and have a great view. The scenery itself is quite surprising as the hills rise up quite a bit compared to Dublin.

On my first international trip many years before there was such a thing as Unesco World Heritage sites, I bicycled up to this area from Dublin and stayed atvavyouth hostel across the road from the Monasterboice site. It was a lovely site and the monasteries, dedicated to group work, prayer and scholarship far from the remnants of "civilization" were quite well preserved and signed, right down to the sink (lavabo, Latin fans) in the kitchen.

As the rational notes, this group focus differs from those of the other early Christian monastic sites.

I also visited the Kells and Glendalough sites in spots that truly earn Ireland the name of the Emerald Island. As many scholars ackowledge the Celtic contributions to the preservation of knowledge during a very confused time in the post Roman Empire, this is certainly worthy of inclusion