Ancient Cities of Lycian Civilization is part of the Tentative list of Turkey in order to qualify for inclusion in the World Heritage List. This site (or parts of it) has already been inscribed under Xanthos-Letoon WHS.

The Ancient Cities of Lycian Civilization represent mainly Hellenistic and Roman sites such as Patara (the capital), Xanthos, Pinara, Olympos, Myra and Tlos. 23 cities formed the Lycian League, a democratic union. Their most notable monuments are the rock-cut tombs. 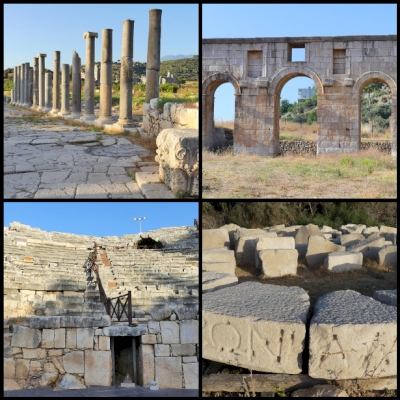 Patara is a perfect site to combine with a day at the beach. Several turtles use this beach as their nesting ground at night so when I visited I could see several signs and numbered posts indicating the numerous places on the beach where turtles had already laid their eggs. I parked just before the beach and hiked leftwards from the car park behind the sand dunes covered with vegetation following Google Maps to the ancient Roman lighthouse remains. It was easier for us as there was a crane at the site since a huge reconstruction project was launched in 2020, nicknamed the Year of Patara. For the time being only the huge three stepped base and a few huge stones of the 2,500 original ones are in place. The rest have been numbered and sorted around the base. It was great to be able to look out for the ones with Latin inscriptions on them (bottom right photo). The ancient lighthouse was devastated in 1481 due to an earthquake in Rhodes and a subsequent tsunami in the Mediterranean. The reconstruction project will use artificial intelligence to determine the original placement of the original stones and reconstruct the structure. More information and a computer generated photo is available on the Daily Sabah. I was the only one to venture so far away from the beach and main ruins when I visited and I was startled by "close encounters" with semi-wild and wild annimals; tortoises, oxen, and wild boars, the latter being quite dangerous even though I hurried away in the opposite direction at once.

The main ruins are scattered around what was once Harbour Street (top left photo) where there is a second smaller car park. Harbour Street connects the inner harbour to the agora in front of the bouleuterion. It is one of the widest and best preserved streets in Lycia. Both sides of the street are lined with Ionic order colonnades as wide as six meters. The colonnade on the east is made of granite while that on the west is made of marble columns. Behind the colonnades are the remains of various ancient trade shops. Another highlight is the heavily reconstructed assembly hall of the Lycian League overlooking the theatre on the south side (bottom left photo) with several inscriptions. Displayed in front of it is a replica of the Abora IV reed boat which is believed to have been the vessel used for the expedition from Varna, Bulgaria to Patara. This expedition is believed to have tested the reliability of the maritime trade route between the Black Sea and Egypt.

One of the closest structures to the entrance gate is the recently restored great city gate, which is believed to date back 2,000 years. It is said to be unique in the world in terms of its water transfer duty as it had the task of transferring water as a reverse siphon (top right photo). Just behind the gate are a few Lycian tombs, a recurring remain in this region of Turkey. In Fethiye, one of the huge tombs is literally in the middle of a busy modern street as if it were a make-shift roundabout! 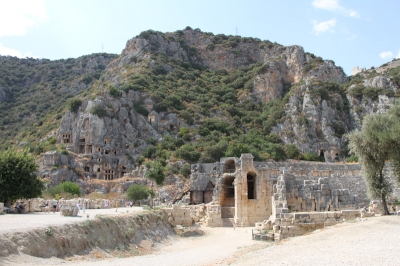 I visited 4 of the currently proposed 6 Lycian cities on my trip from Xanthos to Antalya.

Already inscribed as a WHS, this is probably the town most travellers will visit. The site is already covered by the several Xanthos-Letoon reviews.

Patara served as the Lycian capital and the archaeological site stretches over a large area. After passing the tollbooth to pay the entrance fee, the road leads more than 1km into the site until you reach the parking lot. The area includes a rather well preserved theatre, a heavily reconstructed parliament hall and several remains of other buildings such as baths and temples. If you hike up the hill behind the theatre, you will find a tomb and a view point. I covered the northern part by parking my car near the ancient main gate. From there you can visit the Harbour Bath.

Myra is located at the northern border of the city of Demre. It can easily be combined with the St. Nicholas Church TWHS in the city center. The site is very small, but very scenic. It consists of a very nice and big theatre and countless tombs built into the rock behind the town. I spent around 40 mins on site and would not know how to extend it much further.

Phaselis is only one hour drive from Antalya. This site by far attracts the most visitors of all the Lycian cities. It is located directly at the sea and the locals flock the beach there on sunny days. I felt a bit weird with my camera, walking past grills, towels and umbrellas. The remains partially reach the water, but are mostly located in a forest that start right behind the beach. There are remains of an aqueduct, temples and a small theatre.

As a serial nomination this would be a worthy addition to the list, in my humble opinion. Compared to some Greek or Roman site already on the list, Myra or Patara certainly don’t need to hide.