Asuka-Fujiwara : Archaeological sites of Japan's Ancient Capitals and Related Properties is part of the Tentative list of Japan in order to qualify for inclusion in the World Heritage List.

The site is comprised of a cluster of archaeological sites of ancient capitals in the Asuka region, where the imperial capital was located from the time of Empress Suiko's enthronement in 592 A.D. to its relocation to Heijōkyo (Nara) in 710. The component features of the site are principally the archaeological remains of palaces and residences of the emperor and imperial court and their related facilities; the site of Japan's first genuine capital city; and the remains of temples and burial mounds constructed in and around it for members of the imperial house, nobility, and other important personages during the century this area functioned as the capital. 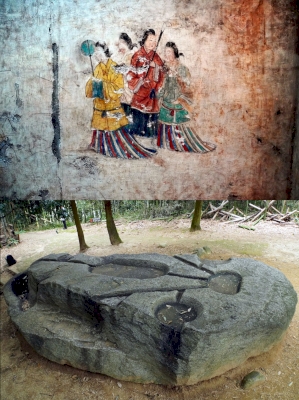 The Asuka period ranged from the mid-6th century to the early 8th century, when the imperial capital was first located in Asuka and then in Fujisawa for sixteen years. The period is characterized by the increasing influence of Korea and China on culture and society in ancient Japan. Important events at this time were the official introduction of Buddhism and the first written constitution in Japan.
The term "archaeological sites" in the title of the TWHS suggests that most of the sites are underground and that little is visible of the original remains. And indeed, the TWHS entry at the Unesco website reads: „The component features of the site are principally the archaeological remains of palaces and residences of the emperor and imperial court and their related facilities (such as gardens, etc.); the site of Japan's first genuine capital city; and the remains of temples and burial mounds… These remains have been preserved beneath the earth in good condition down to the present, …”. The T-list entry does not specify the locations that are designated for a future nomination, only a few are mentioned by name (e.g. Takamatsuzuka Tomb, Kitora Tomb). But Wikipedia knows more and provides a complete list of 28 sites clustered in the municipalities of Asuka and Kashihara.

Coming from Nara, I arrived at Asuka train station in the early morning. Asuka is on the Kintetsu Railway Line, which is not included in the Japan Rail Pass. I fully agree with Zoë (see the review below) that a rental bike is the most appropriate means of transport to explore this tentative site, and it is highly enjoyable. A bike rental is located in front of the train station, right next to the tourist information. I scheduled half a day for this TWHS, time enough for a proper visit, most of the locations are within a radius of 3-4 km east of Asuka station. In a full day you may be able to visit all of the 28 locations.

My first stop was Takamatsuzuka Kofun, located in the Asuka Historical Park. The tomb is not open to the public, but the Mural Hall Museum right next door shows replicas of the colourful frescoes and the grave goods. Actually, it is not allowed to take pictures, but I was faster than the guard who kindly made me aware of the prohibition sign. So I have a photo of the most famous fresco (upper photo). A little further south is another tomb with frescoes, the Kitora Kofun. Again, the original grave is closed and replicas are on display in a museum, but at the day I visited it was closed due to a school event.
Ishibutai Kofun seems to be the most popular site in Asuka in terms of number of visitors on that day. It is the only kofun that is not covered (or rather: is no longer covered) with earth, so the two massive megaliths that form the ceiling are visible. And you can even enter the tomb.
The Sakafune Ishi (lower photo) is the most enigmatic stone in Asuka, its original purpose is unknown. Legend has it that it was used for brewing sake, for squeezing the moisture out of sake yeast. This gave it its name. However, there are various other theories. Indeed, the grooves and hollows look like made for running liquids. But it is not evident whether it was sake, water, oil or something else. Anyway, I had a great time speculating with some guys from New Zealand about the function of this stone slab. We have proposed some really strange hypotheses.

The ruins of Itabuki Palace are an example for the above menitioned archaeological sites where the foundation stones have been restored or the ground plan is symbolically marked. Similar sites include the Inabuchi Palace, the ruins of the Buddhist temples Kawara-dera and Yamada-dera, and the Asuka Mizuochi Site, in the 7th century the location of a large water clock.
There are also three active Buddhist temples on the list: Asuka-dera, Oka-dera, and Tachibana-dera. Of these, I only visited Asuka-dera. It is regarded as the first Buddhist temple in Japan. The temple was moved to Nara during the relocation of the capital in 718, and renamed in Gango-ji. The buildings that can be visited today are only a few hundred years old and date back to the Edo period. Worth mentioning is a three-meter-high Buddha statue, which is considered the oldest Buddha statue in Japan, at least some parts of which date from the early 7th century.

From a visitor's point of view, this TWHS has no spectacular sites to offer. The Kofuns are closed to the public and the remains of temples and palaces are hidden underground. At some sites, the foundation walls have been reconstructed to give an idea of ​​the size and layout of the buildings, at other sites, the destroyed buildings have been replaced by later constructions, and sometimes you have to be content with an info board.
But I was also pleasantly surprised, as is often the case when you don't expect much. All in all, I had a good time exploring this rural area, cycling through rice fields and small villages and hunting for some odd locations.

No doubt, that the proposed sites are of historical significance. There are numerous remains in a relatively small area that represent an important period in Japanese history, further illustrated by museums, replica and reconstructions. Enough to tell a comprehensive story. In my opinion, an inscription is very likely if this site would be nominated. 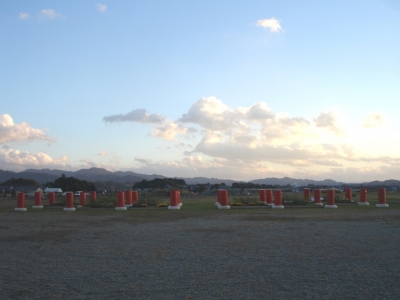 I just wanted to add the Fujiwara part of this nomination.

I visited the site in 2010 where the Fujiwara Palace of the Asuka Period used to stand, as shown in the photo.

I'd say this is important because the palaces of the kings, Tenno in Japanese, is perhaps the most important in any period.

In the Historic Monuments of Ancient Nara WHS, for example, the Nara Palace, called Heijo-kyo in Japanese, is the only one of its kind; all the other six elements of the WHS are religious edifices. (But the Nara Palace has been reconstructed; the Fujiwara Palace has not, as shown in the photo.)

In the Historic Monuments of Ancient Kyoto WHS I do not know why the Kyoto Palace, called Heian-kyo or Kyoto Gosho in Japanese, is not included in the WHS. It's most likely because it is just like the fact that the Jingu in Ise is not even nominated for a WHS, even though it is without a doubt the single most important historic site in Japan by any means: as the Japanese thinking goes, they are so important that they should not be protected by foreign money.

The Fujiwara Palace can be most conveniently reached from the Yagi-Nishiguchi train station on the Kintetsu Kashihara Line, four stations north of the Asuka station.  From the train station it's about 2 km away. 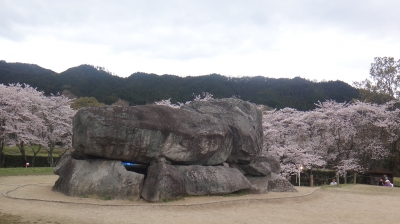 Asuka just screams "rent a bike". Arrive at the appropriately named Asuka railway station and there will be a bike rental place just on the side. This is the best way to see the area because it is a little far to walk but if you have the time it is also possible. There is an excellent tourist map for the area with many features you are trying to find such as stone sculptures and the burial rocks. If you arrive a little late in the day you can also get the bike cheaper (it was offered by the guy, Japan isn't a place to bargain on prices). Once you cross the main road to the east the paths are too small for cars and you will mainly come across other bikes and pedestrians.

The major place to visit is the Ishibutai Tumulus. There are surprisingly many tourists for something that isn't exactly attractive, has much to look at or is even going to take you more than 5 minutes to explore. I suppose it has a lot to do with the cherry blossom season which makes the area around it beautiful.

Overall you can spend a day here if an event takes place at the nearby multi-purpose rest area but half day is enough especially if you take the bike. 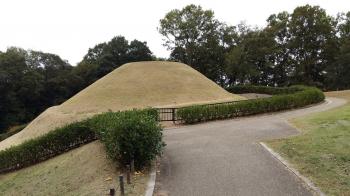 In the period from 538-710 the Japanese capital was at Asuka, 25km south of Nara. At the time there was no permanent residence of the emperors. With every succession a new palace was built and the court moved. This was due to the believe that the predecessor's spirit remained in the old site.

As a consequence, the area is dotted with ruins and burial mounds. In the Takamatsuzuka area (closest to Asuka station) there is a mural museum showing replicas of how it looks inside a burial mound. Please check the official website for more information.

The burial mounds are similar to those found in Korea. But this being Japanese, the site being relatively large and the time period not well covered in the current Japanese list, I feel this should be inscribed. Unfortunately, I did not make it to the other Japanese burial mound item on the tentative list, Mozu-Furuichi Kofungun, so I cannot compare the two.

The site is easily accessible on the Kintetsu railway line between Nara and Yoshino (Kii Mountains). I combined Yoshino and Asuka on a day trip from Nara. Note that this is not covered by the Japan Rail Pass.