The late ancient tomb of Silistra

The late ancient tomb of Silistra is part of the Tentative list of Bulgaria in order to qualify for inclusion in the World Heritage List.

The tomb of Silistra is an Ancient Roman burial site from the 4th century. It has one chamber, decorated with a frieze covering all its walls with frescoes. A man and his wife were buried here. It is seen as a work of Roman paganism.

Map of The late ancient tomb of Silistra

As a last stop of our 2018 meetup we went to Silistra. We come from Srebarna and just followed the Danube.

Els had prearranged a tour (you can't get in otherwise). From the outside you can see a small chapel through the fences, but that's not really what you come for. It's the tomb hidden below the chapel that is interesting. It's interior is richly and colorful decorated and in a good state of preservation.

Still, I did not take any pictures which normally points to a fairly underwhelming experience.

The site is tiny. It's a single Roman tomb, nothing to really get you excited. I can only see this happening if it were combined in a serial nomination.

Silistra marks the end point of the Eastern Danube portion of the Roman Limes (T). You can find old fortifications in the town center. Nearby is also the all time great Srebarna Nature Reserve.

From Silistra, you can also cross into Romania to head to the Danube Delta. If you are going by car, you can stop at the l'ensemble rupestre de Basarabi (T). Philipp's review should give you a proper feeling for what to expect there. 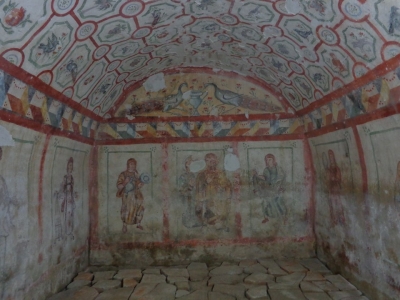 The late roman tomb is Silistra is a small, almost forgotten place (there are few visitors in Silistra, which is, first of all, a border town with Romania), but it is a real gem. Visits are only with a guide and have to be arranged some days before the planned date with the Archeological museum of the city. Visits are limited to preserve the paintings inside the tomb, but my feeling is that there are not so many visitors anyway.

On a Monday morning in August 2018 we picked up our guide in front of the door of the museum (closed on Mondays) and drove together to the Roman tomb. A recent building protects the tomb, so you need the key (and therefore the guide!) to get inside. The tomb is a one room construction, laying in the basement of the modern building, but big enough so one can stand inside. Internal walls of the tomb are fully covered with paintings. I was astonished to see how bright the colours still look like: red, green, blue… In front of the door are represented a man and his wife (probably the ones the tomb was intended for), and on the side walls, servants are shown bringing them clothes, belt, mirror, etc. The ceiling is covered with small drawings such as birds, animals, flowers. With the exception of one hole in the ceiling (the tomb was discovered during agricultural works on the surface), it is intact.

For unknown reason, this tomb was never used. Owners may have die somewhere else, or run away invasion (the tomb was built in the late Roman period, when the Empire was already suffering invasion, and Silistra, for being on the border (Danube was the roman limes at that time), was a very exposed place).

Romans founded Durostorum (nowadays Silistra) and it was an important place for them, with a Legio to protect it and guard the border of the Empire. Part of public baths can still be seen in the city, as well as part of roman fortifications and early Christian church in the park on the banks of the Danube (a component of another TWHS), however this late roman tomb is the building that shall not be missed when visiting Silistra. Being able to visit the original place (and not a replica as for some Thracian tombs in Bulgaria), with a private guide opening the gates just for you, and standing with a lamp in your hand to admire the paintings are details that make this short visit memorable.