L'ensemble rupestre de Basarabi is part of the Tentative list of Romania in order to qualify for inclusion in the World Heritage List.

The rock ensemble of Basarabi comprises churches carved into the rock. It dates from the 9th – 10th century. There are many inscriptions engraved on the walls, in the Greek alphabet, the Old Slavonic language, in Cyrillic and (most numerous) runic inscriptions of Turkic type. 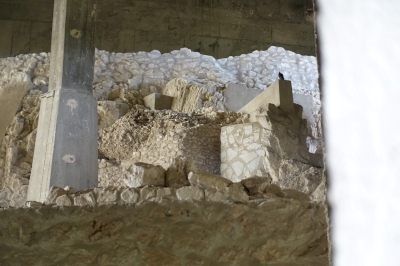 Being the other part of the advance German/Swiss tentative site scouting team, I think I need to weigh in on Philipp's review.

There are tentative sites ready for inscription with English signs posted everywhere, a visitor center opened, a tourist shuttle bus operating regularly from the next major train station and the Unesco sign already displayed at the highway exit.

And there are tentative sites that feel like a draft of a brainstorming session scribbled on the back of a cigarette pack by the interns of the regional cultural office after a drunken night out in Constanta. The proposed site falls into the latter category.

When we arrived we were lost. Google maps had precisely guided us to the location and I seem to recall a sign along the way. But when we were there we only saw a steep hill with a monastery on top, a small lake, lots of weeds, a quarry and ruins of a concrete building, that looked like a former factory. We went up the hill to the monastery to check if the site was there. Then we went down again and went on a climbing expedition to get to the concrete building. Eventually, we got glimpses of the inside and confirmed that the concrete building was covering the ensemble rupestre. The Romanians constructed it to protect the remains against the elements.

It seems the site also has an official entry but we were not able to figure out the opening hours or if it's open at all. As is, both Philipp and I were hard pressed to even understand what the site was about. Reading up on it in Wikipedia it seems that it was a cave monastery founded in the 10th century, the proper name being the Murfatlar Cave Complex. Little remains and in the current state of preservation this will not be inscribed. 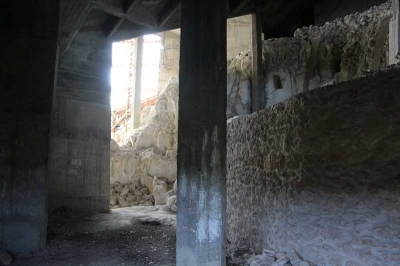 This was certainly the weirdest TWHS I ever visited. Me and fellow enthusiast Nan stopped there on the way from the Danube delta back to Bulgaria. It’s not too far off the highway. But getting close turned out to be a real adventure.

Whatever Romania tried to establish there, they must have given up these plans. The archeological remains are covered by a massive unfinished concrete building in a fenced compound. Through a few windows (rather holes) some features of the site can be spotted. We even trespassed through the fence to get closer, but without much success. Whatever Romania once considered as of OUV lies now abandoned, covered in bird poo and surrounded by wilderness (which we conquered to get a closer look). To top the experience, the area seems to be an active military training ground and we were lucky our car wasn’t crushed by a tank.  There was also a monastery on top of the hill, but probably not part of the core zone. I would not count on this ever becoming a WHS. At least the visit was an adventure