Karst Valleys of Slovakia is part of the Tentative list of Slovakia in order to qualify for inclusion in the World Heritage List.

The Karst Valleys of Slovakia comprise a (not further identified) group of selected karst areas around the country. Typical for these karst areas is the occurrence of Carpathians plant and animal species.

Map of Karst Valleys of Slovakia

Piggybacking on Matejicek's review, I would like to pipe in as a local. Slovenský raj is part of the Slovenský kras (Slovak karst) area in the East Slovakia and is considered one of the best places to hike as the hikes are interesting: they glide alongst waterfalls and contain loads of iron elements: steps, rails, chains. Some of them are proper ferratas, so you will not be able to get on them without proper equipment (harness and helmet). It is the best place to take your kids hiking and they might not find it that boring. Having said that, in summer season it will be quite full and if you don't wake up early enough, you will be waiting in slowly moving lines... imagine similiar situation in Plitvice lakes but on a steeper hill. Though if you want to go, I would be very careful of my belongings, especially when camping, some of the local residents do have sticky fingers and it's a notorious place as far as petty crime goes. I have done some hikes on my school trip, we stayed in Podlesok, Hrabušice.

Zádielska gorge is also a nice and picturesque hike, though if you don't have your own car, you have to take a bus to Turna nad Bodvou or Zadiel from Kosice. As far as Jánošíkové diery Matejicek has mentioned go, they are a nice hike from Terchová, however there is a similiar problem with many people in summer season: go early or don't bother. The hike then continues on to Velky Rozsutec and can be done in couple of hours.

As far as OUV for this WHS goes, I see no point. The most impressive parts of the Slovak Karst are already included in the Cave WHS shared with Hungarian Aggtelek, that's where the most beauty lies. And the unique carst formations above ground are much more prominent in Vietnam - may it be Ha Long Bay or Trang An National park. 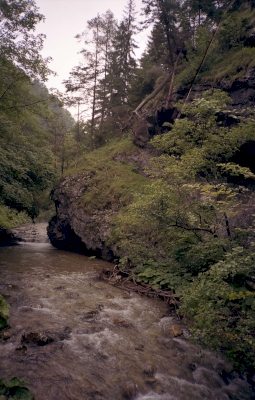 This is an interesting area of a national importance (no chance to become WHS). It is popular for tourists from Slovakia and also from Czechia. It consists of two components (i) Slovenský Ráj National Park, and (ii) Zádiel canyon of Slovenský Kras NP (parts of this NP already inscribed as WHS). However, there are quite a lot of similar places even in Slovakia in Malá and Velká Fatra, Choč, Muráňská Planina mountains, to name at least some of them.

I have visited only Zádiel Canyon in the Eastern part of Slovakian Karst, not far from the city of Košice. It is a monumental structure visible from big distances. The entrance to the gorge is regulated by fee around 2 EUR. While it is pleasant walking there, I am afraid it cannot compete with canyons of other European regions (Crete, Northern Greece, Southern France etc.). Furthermore, the nearby area has been already declared as WHS.

The component of Slovenský Ráj (Slovakian Paradise) is very popular touristy area of deep & narrow limestone canyons covered by dense forests, and the entrance is also strictly regulated. However, the crowds of tourist repelled me from the visit. There are ladders and secured paths with only one-way direction allowed. Slovenská Ráj NP is located in Spiš region, thus, quite close to Spišksý hrad and Levoča WHS.

Instead of Slovenský Ráj, I enjoyed similar canyons in Fatra region – Janošíkové Diery, that are somehow similar, closer to Czechia and not so crowded.

Further updates and changes in the nomination:

I just find an article in Slovak journal Environmagazín (5/2007, p.16-17) in my archive, on which I completely forgot, and it describes the changes intended by the state party of Slovakia. It has the title “On the Nomination of Mesozoic Canyons o Western Carpathians” and explains that the former nomination from 2002 focusing mostly on the Slovenský Ráj had been refined in 2007 to increase the chanced for the inscription. More components were added - all together 12 canyons in Slovakia:

From this enlarged list I have visited not only already described Zadiel and Pieniny (which had been likely intended as the separate nomination with Poland and also my review there...), but also Blatnicka and Gaderska dolina in very beautiful Velka Fatra mountains (PHOTO). These canyons of Velká Fatra mountains are quite easily accesible from village Blatnice (meadows around it are the part of another TWHS of Slovakia). As evident from the Photo, walking through the canyon is not very spectacular because of the dense vegetation. I Admired these valleys much better from above - from the main ridge of the Velká Fatra mountains. The components No3-4 in Chočské vrchy are located not far from the Velká Fatra, and they are accesible from town Ružomberok. I could see the mountains from distance but have not visited yet.
However, my opinion on this TWHS has not changed…