The Betlém Rock Sculptures near Kuks

The Betlém Rock Sculptures near Kuks is part of the Tentative list of Czechia in order to qualify for inclusion in the World Heritage List.

The Betlém Rock Sculptures in Nový Les near Kuks comprise a complex of biblical scenes sculptured by Matthias Braun. They date from the early 18th century. The work was commissioned by the owner of the nearby Kuks spa, Count Franz Anton von Sporck.

Map of The Betlém Rock Sculptures near Kuks 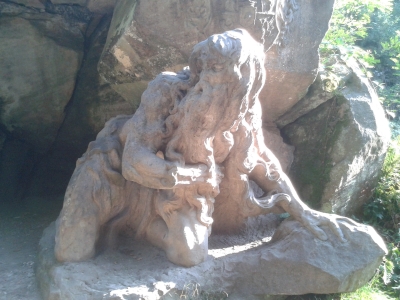 What we can find now in the so-called New Forest are only small fragments of large Baroque program around the Hospital Kuks, the spa complex, founded by Count von Sporck in 18th Century. Unfortunately, the central scene of Bethlehem was seriously damaged. The sculptures and relieves were carved on/from the high-quality sandstone rocks in situ by one of the best baroque sculptors active in the Czech lands: Matthias Bernhard Braun, Austrian artist hired by Bohemian nobility. Originally, the sandstone statues were completed by wooden ones, carved in the trees, and all of them brightly painted. The statues were intended for contemplation, reflection, but also entertainment of the spa guests. The workshop of Braun was rather active, and we can find his works also in Prague on the Charles bridge, such as the famous Dream of Saint Lutgardis.

I visited the site on sunny September Sunday 2021 by local train from Jaroměř (every 2 hours). As I spent too much time in the fortress Josefov, I had only 40 minutes to go around 1 km uphills from the train stop Žireč, admire the sculptures, and return to the train stop for the very last local train with transfer to the fast train in direction Prague. Thus, I missed the exploration of the Hospital Kuks, which is located some 2-3 km from the sculptures, and which is also decorated by rich statue program by Braun. However, I have been to the Hospital already several times. I can say that even half an hour was enough for visiting the site.

It consists of the following parts: the Well of Jacob with fragments of statues sitting on it; the Vision of St. Hubert; the Adoration of Shepherds; the Arrival of Three Kings; Nativity; the Lying Marry Magdalene; John the Baptist; the statue of sheep; the Hermit Onufrius; the Hermit Garinus in front of his cave (PHOTO; maybe the most famous and valuable part); the seat, and smaller carvings like crucifix, coat of arms, etc. Few other sculptures that survived were moved to the garden of the Hospital Kuks.

It is not surprising that only statues and relieves, which were not detachable, can be found on the place. Nevertheless, most of them suffered from vandals, quarry operation, war raids, as well as erosion and negative impact of moss and lichens. The sculptures were meticulously restored and cleaned very recently (Summer 2021), and further restorations are on the way. There is also big plans to build the visitors center with the model of the original appearance.

As evident even from the photos, the statues are very nicely elaborated and they are considered as masterpieces of Baroque sculpture art in Czechia. However, I cannot find any OUV of this TWHS. I do not thing that Czechia is famous for rich and intricate sculpture decorations of gardens and exteriors as it is for example in Italy or Portugal. As I already mentioned, it is almost miracle that the sculptures survived to our days, and the main reason is that there are not detachable. Furthermore, the statues and relieves cannot be distinguished from the detachable and free-standing works of Braun and similar baroque artists.

I checked the connection Rock Cut Art https://www.worldheritagesite.org/connection/Rock+Cut+Art#43 and there are only 10 items. However, the Bethlehem Sculptures near Kuks are hardly comparable to Dazu rock carvings. They are maybe more appealing than Madara Rider, which is however some thousand years older.

All in all, this site is of national importance only, and it is quite popular for local tourist who are enjoying a walk from Kuks to the sculptures through the forest.

The rocks Wege very hard to find. It was already getting dark and when de finally arrived at THW oarking lot it became dark andthe stone sculptures became very spooky. The sculptures are in Bad shape but very fascinating.