Early Synagogues in the Galilee

Early Synagogues in the Galilee is part of the Tentative list of Israel in order to qualify for inclusion in the World Heritage List.

The Early Synagogues in the Galilee were the first buildings to represent a monotheistic religion. In Galilee, about 50 remains of synagogues from late antiquity, the period from the fourth to the seventh century, have been found. Most notable are the remains of the synagogues in Bar'am, Korazim, and Capernaum.

Map of Early Synagogues in the Galilee 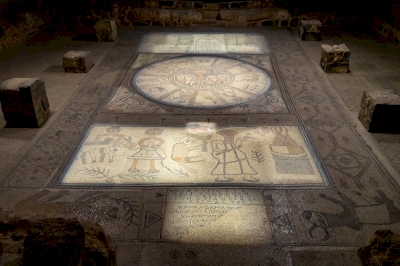 On my travels around Israel in November of 2019, I stopped by Bet Alpha National Park, which ended up one of my favorite ancient sites in the country (including many places that are already inscribed as WH sites).

Bet Alpha must be the smallest of all national parks in Israel - it is basically a single room of the ancient synagogue headlined by the primitive yet evocative mosaics on the floor. The 15-minute interpretive video – which started as soon as I entered the room, since I was the only visitor at the time – is a lighthearted dramatization of the origin of the mosaics, mixed int with an overview of the synagogue architectural features. It is definitely worth the time to see and listen to; as the explanations cover different parts of the mosaic, those components are lighted on the floor. After the movie ended, I had a few minutes to look over the mosaic and the remains of columns and supports under the full lighting.

The cost of the entry is but a few dollars, and if you have the "orange card" Israel Pass (which allows entry to almost every national park once within the space of two weeks) there is no additional cost. No guidance is needed for the visit, which in my case lasted less than half an hour.

The rest of the synagogues on this tentative submission are clustered near Tzfat or by the northern shore of Lake Kinneret. I was close by only on intraday basis and did not find time to stop by them, but I assume that if you are staying in the area, you can cover most if not all of them in a matter of less than a day. 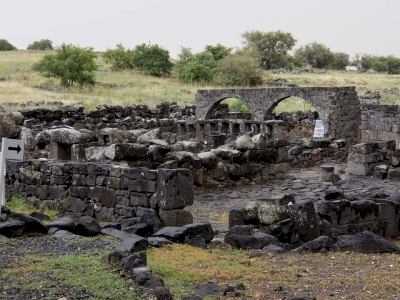 Back in 2018, I visited a great many sites in the Galilee region of Israel. While many were just the usual pilgrimage sites, I intended to visit a few destinations a bit off the beaten track. One of which was the ancient ruins of the town and synagogue of Korazim. It ended up being one of my favorite little places in Israel.

Korazim is not on the normal tourist circuit by the shores of the Sea of Galilee. The site lies in the hills above Capernaum and Tabgha, about a 15 minute drive away. I took private transport to get there, and as we approached, the basalt rocks were especially eye-catching. The contrast between the green sloping fields and the black outcroppings was strangely beautiful, and along with the stormy weather and lack of people, made for a unique aura even before entering. The parking lot was empty aside from a couple of other private cars. A short walk down the trail would show what all that black rock came to be used for: construction. Every block of the ancient town, said to date from the 4th century CE, was made of the same rock that protrudes from the ground all around.

While only foundations of most buildings remain, the old synagogue still stands, albeit not without damage. Many intricate basalt carvings used to decorate the building now lie on the floor or on pedestals, including the pediment of the facade. The structure still, however, forms an enclosed space, and on that lonely stormy afternoon, one could feel the solemnity of the venue, in contrast to crowded Capernaum which we visited later that day. The small range and span of the ruins also gave a more intimate, small-town feel that I greatly enjoyed.

Since Capernaum is greatly covered by reviews on this site and other serial sites, I will no longer cover it here, as there is nothing to add other than my opinion of it being rather crowded and the modern church being rather sad and inappropriate. Although I do think the synagogue in Capernaum is probably more impressive, it doesn't give off the same tranquil, mysterious, and holy aura that Korazim does. As for the 5 other synagogues, I did not have the time to visit them in the 4 days I had in the Galilee, but if they're anything like Korazim, I think they would justify an inscription based on the preservation of the ancient synagogues that show the fusion of Roman architecture and Jewish tradition. 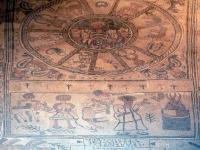 The one at Capernaum, as described in my review of the “Sea of Galilee and its Ancient Sites” is slightly overwhelmed by the Christian nature of the site. The sign on the Synagogue walls points to the fact that you are looking at “The Late 4th century White Synagogue built upon the remains of Synagogue of Jesus”. The significance of the latter arises particularly from a statement in the Gospels that Christ performed a Miracle in it (see Mark 1 21-28). The much later “White synagogue” is quite an elaborate (and partially reconstructed) structure with Corinthian columns

I will concentrate this review on the site at Beit Alfa. This isn’t so much about a “building” but consists primarily of a remarkably well preserved mosaic from around the early 6th C CE in “naïf” style. The mosaic was only discovered in 1928 when the local kibbutzniks were digging a water channel to drain thw swamps of the area. The site is situated around 15 minutes by road from Beit She’an and in my view is very well worth taking in. It is another Israeli National Park, so your entry pass will get you in – or else it will cost 22 NIS for a visit which will take around 30-45 minutes.

The mosaic is completely covered by a climate-controlled structure and a visit consists of a periodically shown (“on demand” in our case as there were no other visitors when we arrived) AV presentation which is viewed/heard from a raised walkway which surrounds the mosaic plus a period of “personal” viewing whose length will depend on the queue of visitors for another “showing”. The mosaic fully covers what would have been the main hall of the synagogue and consists of several panels (28 x 14 mtr).

We thought that the AV was well done – and well ahead of what one might have expected at what is, after all, a fairly small park even in Israeli national terms. It dramatized the decision of the local congregation to upgrade their mosaic floor, find the money, search for a mosaic artist and determine/agree the designs/scenes. In so doing it provided a “hook” on which to hang the introduction of a range of relevant aspects such as the social background of the villagers (this was no “grand” structure by the rich), and the beliefs about what should/should not be portrayed (somewhat surprisingly the Zodiac panel includes pagan symbols), as well describing each of the panels. Photography is allowed, but the light and relatively low viewing height above the mosaics make it difficult fully to capture the designs and colour (not helped by the very small display "area" Els allows us! My photo shows the “Binding of Isaac” and, above it, the Zodiac.

It is true the Galilee is crowded with early synagogues (Peki'in, Gush Halav, Meron, Amud, Baram, Navoria - just to name a few). The most impressive site I've been to is probably Capernaum near the Sea of Galilee also known for being the site of Petrus' house. The synagogue resembles a well preserved Roman temple and is also beautifully located near the shore. Another impressive building is the one in nearby Korazim. Synagogues with original mosaics are Beth Alpha, Hamat Tiberias, Maruth and Seppharis. These show the strong Roman influence on the Jewish culture of the time by combining Roman gods in the depiction of Biblical scenes. I haven't been to Maruth but the other three are impressive and probably unique. I think this nomination could fill a gap and be justified.